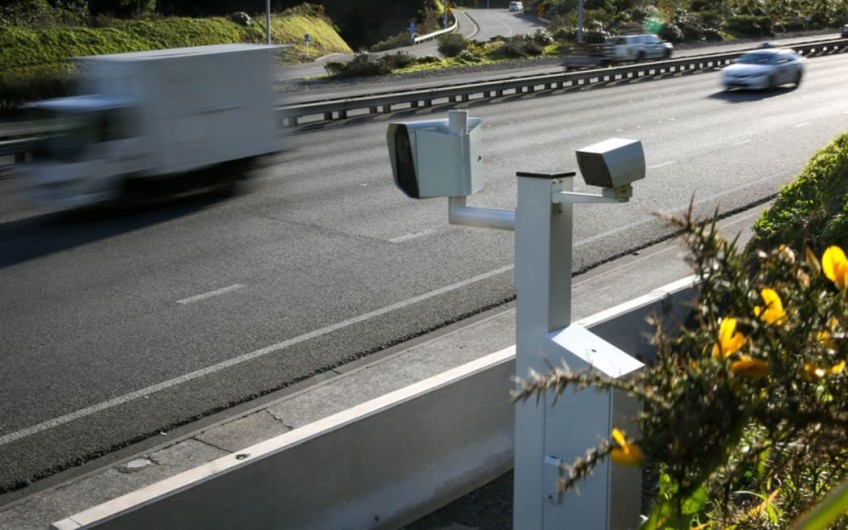 New "average over distance" speed cameras on the way

Speed cameras that take two pictures at different spots in order to work out a vehicle's average speed could be in use within months.

At present there are 142 safety cameras across the road network, an increase of 30 since 2019.

Transport Agency documents say law changes could allow them to be used against more offences including tailgating, and seeing inside a car to spot drivers using cellphones or not belted in.

The OIA papers show Waka Kotahi has been working on this and a new highway tolling system that can also be used for congestion charging, for a couple of years.

Its plans say the point-to-point or average-speed cameras "could be a game changer enabling us to manage corridor speeds rather than spot speed".

They would be three times better than fixed or mobile speed cameras at cutting the road toll, [https://s3.documentcloud.org/documents/22135679/attachment-4-scs_ibc_final_v025_redacted.pdf a business case said.

The smart cameras "can be used to provide evidence, for example, that a driver is using a mobile phone or not wearing a seatbelt.

"Camera-based enforcement can be invasive, as images are purposely taken of the driver and passenger compartment," the business case stated.

A board paper from April said law changes under the Regulatory Stewardship Transport Amendment Bill meant from early 2023 there could be use of point-to-point cameras, automation of offence processing and fine notices delivered to cellphones.

Already 26 of the new cameras are on order to add to the 142-strong network.

The agency is calling them "safety cameras" in a Cabinet-ordered attempt "to shift the public away from perceptions that safety cameras are an enforcement, revenue-gathering tool".

Medium and high-risk roads will be the target.

A camera business case estimates they could save between 1500 and 2400 lives and $1.5 billion across two decades.

Waka Kotahi refuses to specify the total cost of the camera system and new tolling system, saying this was to protect "ministers, members of organisations, officers, and employees from improper pressure or harassment".

However, just the first phase - choosing the mix of cameras, where to put them and the design of the system - costs $21.6m, which is $10m more than expected, though the documents said that had not impacted the whole budget.

The work is being done quickly alongside a review of road offence penalties with the aim of saving 114 lives a year by 2030.

As it stands, relatively few cameras per capita and lack of advanced cameras, along with very low penalties for speeding "greatly undermine the effectiveness of the enforcement approach", the papers say.

Fines are set to rise and demerit points are very likely to be stiffer, and applied for the first time to camera offences.

Authorities see all this as crucial to the Road to Zero strategy, with cameras expected to provide 5 percent of the 40 percent reduction in road deaths and serious injuries that is the strategy's primary goal.

Waka Kotahi is taking them over from police, adding to its 2000 traffic management cameras.

It would not say how many cameras it planned to have.

Police were already testing prototypes of trailers to carry point-to-point speed cameras that might be used at roadworks.

The aim with the network of three types of camera - point-to-point, red light, and standard used in both fixed and mobile operations - is to create an "anywhere, any time" deterrent.

Research shows the public thinks speeding is much safer than it is: 44 percent of all road deaths in the last decade were down to speed.

On privacy, the business case says "the data and digital images captured by cameras, their storage, and their use all have privacy implications".

"New issues will arise with new technologies that can be used for other than current safety-related purposes, such as average speed and mobile phone use detection."

The agency expects a small rise in public support for cameras of up to 2.5 percent as people see the safety benefits.

On the tolling front, the documents show the current system used on just three highways is on its last legs.

"As it is now, the current tolling system is a very inefficient way of collecting money," the business case said.

One option was to run it to standstill, or outsource it entirely.

The is an indication there will be more tolling: "Over time, it should be expected that the cost of an outsourced service will increase as more roads are tolled."

Waka Kotahi has chosen Spanish company SICE to provide and run all the back office systems.