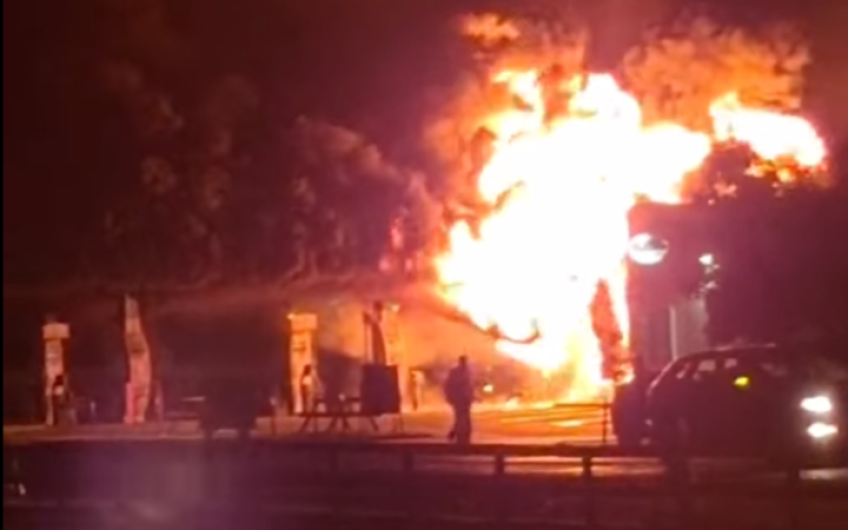 A witness has described the speed with which a Hawke's Bay petrol station caught alight, last night, saying it was engulfed in minutes.

Nearby residents were evacuated at about 9.30pm, after the large fire started in the BP Service Station on the main road in Bay View, about 9 kilometres north of Napier.

Hayley Munro, who lives across the road from the petrol station, says she heard a loud bang which she initially thought was a car crash.

"I ran outside... and that's when I saw this massive ball of flames reaching up to the top of the forecourt canopy."

She said the station was open at the time, and she saw staff and customers running for safety.

"It was really quick - within minutes the whole thing went up."

Loud cracking and explosion sounds were coming from the station, and then the roof of the forecourt started to collapse and the panels began dropping.

Munro retreated back inside, but could still feel the heat through the front windows of her house.

"There was smoke everywhere, I've never seen anything like it."

Detective Inspector Rob Jones said it was "nothing short of a miracle that nobody was injured or killed", which was thanks to the quick actions of staff at the petrol station, and the rapid arrival of firefighters.

He said a container of petrol had been put into a vehicle and was "ignited by a flame from a cigarette lighter".

The fire had spread swiftly, but was contained within the forecourt and didn't reach the main shop area.

"Initial indications are this was accidental," Jones said, but police and Fire and Emergency NZ investigators would continue to look into the incident, and it would be some time before they knew the full chain of events.

Police had been speaking to witnesses overnight, and fire investigators were due to arrive this morning, to inspect the site. They also hoped to get CCTV footage from the petrol station.

Residents who were evacuated were able to return to their homes late last night.

"It's all black and grey, and covered in police tape - it's pretty sombre."