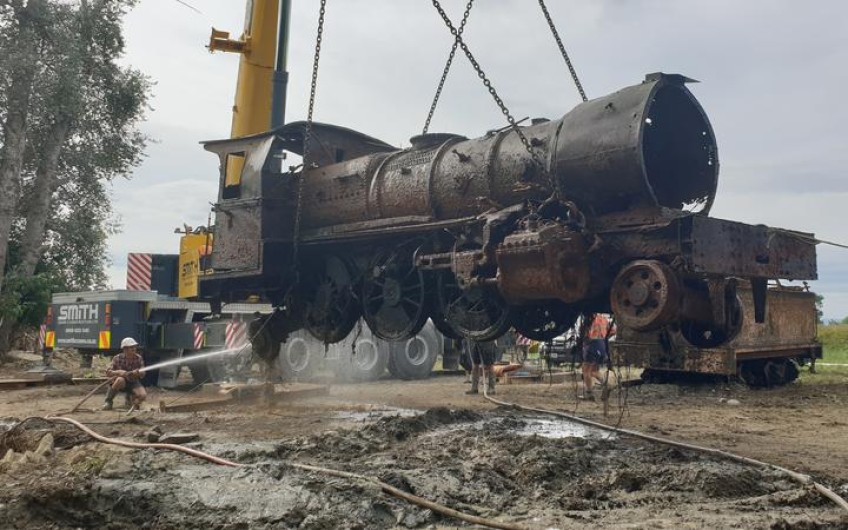 A relic of New Zealand's rail past has emerged from the mud 93 years after being dumped in a Southland River.

A crowd gathered today as the recovered locomotive was placed in front of the Lumsden Railway Precinct - a tribute to a bygone era.

The Lumsden Heritage Trust has been campaigning to retrieve the two 1885 V class steam locomotives from the Oreti River for about half a decade.

Retrieving the machines - thought to be one of the last of their kind in the world - was no easy task.

It was full steam ahead on Wednesday morning, with water pumps on and a crane poised above the first locomotive, which first hit New Zealand tracks back in 1885.

Recovery teams tried hoisting it, but the locomotive was too heavy to lift.

Walking around the muddy riverbank surrounded by willow trees, site safety supervisor Russell Bradley explained that tonnes of mud had lodged in the locomotive, weighing it down.

Workers blasted it with water and hacked at a thick weave of willow roots covering the machine with a garden hoe.

Lumsden Heritage Trust chair John Titter said they were lucky they could even attempt a recovery.

In the wake of the First World War, the value of scrap metal was low so instead of being sold locomotives were dumped in rivers around the country to act as flood barriers.

"Even the guys when we were digging out the other day were jumping up and down because the running boards were there. When we moved it the other day, the wheels turned which is incredible," Titter said.

This was the last opportunity to retrieve the locomotives - the consents are about to roll over and the landowner wanted to see action, he said.

The trust fundraised about a third of the $158,000 cost, before securing the rest of the funding from other organisations.

They had wanted to recover both machines, but Titter said it wasn't to be.

"Over the last couple of days, it's actually gone from a massive task to a mammoth task."

Suction was one of the challenges the workers faced.

"The tender itself weighs 22 tonnes, he was pulling over 30 tonne trying to get it out. The locomotive is 32 tonne sitting on the track. We believe there's probably another 10 tonne of silt in the boilers and things like that," Titter said.

There was relief as the locomotive was hoisted into the air - Titter said it was an unbelievable experience - and emotions ran high as it was placed down onto the back of a transport truck.

"When they lighten these things up for New Zealand rail they weaken the frames and so it's been sitting in my mind that the frame could snap in half at any time ... But there it sits so far, getting on a transport and into town. I think we're nearly there," Titter said.

"We were made aware of it, thought it was of an old wives' tale that there was a train buried down here. We came and had a look early on.

"They've pulled off something that was pretty impressive."

For Bradley, it was a once-in-a-lifetime opportunity. He said it would be a reminder of the massive task every time he drove past the locomotive and would be a story he could tell and show his grandchildren.

As for the second locomotive, Bradley said that would be up to the next generation to recover from the soon-to-be restored riverbank.