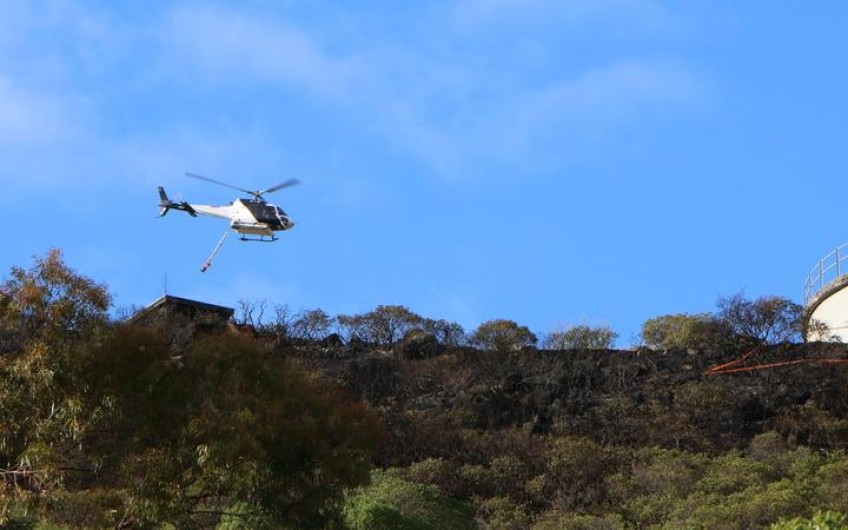 The owner of a Port Hills property where a large scrub fire started has spent a nervous night watching the flames get closer to his home.

One of the helicopters that has been on the scene since first light. Photo: RNZ / Conan Young

At least 50 firefighters have been working through the night to douse a scrub fire in Christchurch's Port Hills which has forced evacuations from homes.

Kester Vos said he noticed the flames at around 11pm.

"Within a pretty short time afterwards the police were on the doorstep saying 'you've got two minutes, grab what you can and get out'. The first thing to do was get all the cars off the property and the dogs.

"Then it was pretty much, OK, we had to clear out of the area, so I've been standing here since 11 o'clock last night."

Vos said the fire was started by young people letting off fireworks.

At first light two helicopters carried out an aerial survey of the fire.

Fire and Emergency said the flyover "looked positive" and the weather today should help firefighters.

Emergency Services were first called at about 11.10pm last night.

Residents evacuated from about 10 properties on Port Hills Road still can't return to their homes but those from Avoca Valley Road can.

No more evacuations are currently planned. Civil Defence is co-ordinating accommodation at St Martin's School Hall for anyone who needs assistance.

Fire and Emergency said it is estimated that the fire has burnt through around 15 hectares.

Firefighters at the scene near where the fire began on Port Hills Rd in Christchurch. Photo: RNZ / Conan Young

Area Commander Dave Stackhouse said the flyover looked positive: "Our crews did a fantastic job stopping the fire from spreading up the hills and potentially impacting homes.

"Our priority this morning is to keep it within the area we have currently contained it to.

"The weather is on our side, with only light winds forecast, this should help us in our work throughout today," he said.

At the height of the fire 15 appliances and crews were deployed.

"The 50 firefighters on the ground are focusing on protecting structures along Port Hills Road and were working hard to stop the fire from spreading further up the hill.

"There have been partial evacuations along Avoca Valley Road and working alongside police, we have been liaising with affected residents in the area," Area Commander Stackhouse said.

One structure, a small cabin, has been lost.

The fire started in the area of Alderson Avenue, off the Port Hills Road close to the suburb of Hillsborough.

It was on the side of the hills facing the city, so Christchurch residents could see it and were phoning Fire and Emergency.

State Highway 76 has been shut off at Curries Road and motorists are being directed away from the area.

Fire and Emergency put out four fires in the area early on Wednesday morning. The fires were considered suspicious at the time, due to witnesses seeing people leaving the scene.

Dunne said motorists were advised to stay away from the area.

One of New Zealand's most devastating fires spread across the Port Hills in 2017, killing a helicopter pilot, burning through 1600 hectares of land, gutting 11 homes and damaging more.

Witnesses were in court in August as Insurer IAG, lines company Orion and Christchurch Adventure Park debated who should pay for the damage.

The 2017 fires began in two separate locations several kilometres apart but merged, and prompted a review of the fire services in New Zealand, culminating in the formation of a national fire service - Fire and Emergency.

Efforts were made in the wake of those fires to plant 10 million trees in the area to reforest it.