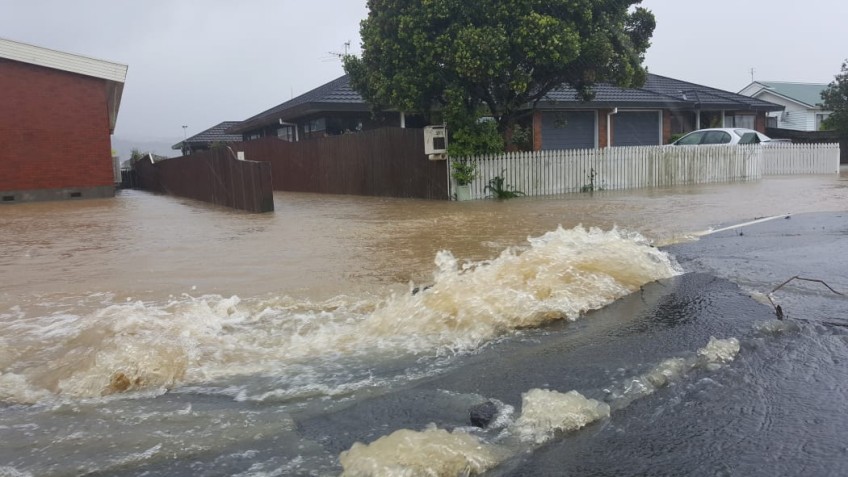 Properties worth $1 million on Wellington's Petone foreshore could reach $100,000 a year to insure in 20 years, a climate risk expert says.

The warning came as the government grappled with whether to set up its own flood insurance scheme to cover people as private insurers become less willing to.

Picture a $1m house on the Petone foreshore, at the Lower Hutt end of Wellington harbour.

Climate Sigma climate economist and modeller Belinda Storey said flood insurance premiums for a house like that right now sat at about $1500 a year.

But she predicted that cost could start to double every two or three years.

"In 20 years' time that insurance subsidy, if the government was to step in and say 'we'll start covering this', that subsidy for that house would be $100,000 per year - and it will keep going up."

Now, that was in the absence of any flood protection being built - but as RNZ reported earlier in August, sea walls could be incredibly costly and rising seas meant in some places they would only buy more time.

She said a public subsidy for flood insurance was a bad idea, and could actually increase risk to life because it would encourage people to remain in harm's way.

"Providing public insurance seems like you're helping people. But if it subsidised people to stay in hazardous location, inevitably [it] will result in lives lost."

Storey said subsidised public insurance in the US allowed a massive wave of development in the 70s and 80s on the coast, including in the Ninth Ward of New Orleans, which was devastated by Hurricane Katrina in 2005.

She said there were houses in the US which had been rebuilt 40 times since the mid 60s, and states were desperately trying to extract themselves from flood insurance which had become financially unsustainable.

She said a far better immediate action by the government would be to make insurers provided data to a regulator about properties or areas where cover had been withdrawn.

"Our regulator could do that today, the policy will be far better designed if they're not flying blind, if they actually know what that level of [insurance] retreat is.

"But they haven't insisted that they provide it."

A treasury report citing research by Aon from September 2021 said 5 percent of New Zealand properties (nearly 90,000 homes) had risk that, if fully priced, would be mean their flood risk premiums would be 1 percent of the property's value.

Auckland, Christchurch, Lower Hutt, Napier and Palmerston North cities were the most exposed to flood hazards in absolute terms. But per head of population Buller, Thames-Coromandel District, Wairoa, Central Otago and Gore districts were the worst affected.

The Insurance Council said there were a number of other factors pushing up insurance prices including inflation, increased building repair costs, changes to the EQC cap in October, and increased reinsurance costs from massive floods in Europe and fires in North America.

Research from 2020 (Storey was an author) showed insurers were likely to stop fully covering some coastal homes in Wellington and Christchurch in the next 10 years due to sea level rise.

It predicted that by 2050 about 10,000 properties in those cities, as well as in Auckland and Dunedin, would become uninsurable.

Minister of Climate Change James Shaw previously said a rough estimate of about $145 billion of private and public assets and infrastructure were at risk from climate change in Aotearoa.

About 20 or 30 centimetres of sea level rise by 2040 was a near certainty, and relatively small increases to the sea-level could drive significant increases to the frequency of coastal flooding.

It could make what was currently considered a rare storm - a one-in-100-year event, happen every year.

There had been a number of such flooding events across the motu in the past 18 months or so.

It was prompting concern there could be what was called 'insurance retreat' - insurers pulling cover completely, or hiking premiums so high they become unaffordable.

The government was currently deciding whether to step in and provide cover - maybe through subsidies or a national scheme - for people who could no longer get it on the private market.

It must balance equity: potentially supporting those who could not afford to pay, with not providing perverse incentives: masking the true cost of risk which could mean people stayed in harm's way longer.

An April 2022 Cabinet paper pointed to the danger of setting a precedent that the government would directly support individuals affected by climate change.

A Treasury Cabinet paper said plans being looked at included a 'do nothing' scenario.

This could potentially allow them to do something called 'risk-based pricing' - to hike premiums to the riskiest properties (or pull cover completely), while lowering them for others.

Newsroom wrote about how [www.newsroom.co.nz/minister-wanted-faster-flood-reinsurance-plan?utm_medium=Social&utm_source=Twitter#Echobox=1659481463-1 this prompted EQC Minister David Clark] to investigate standing up a national flood insurance scheme with haste - in case Tower's move prompted a rush of other insurers to follow suit and pull cover or hike premiums.

But Finance Minister Grant Robertson stepped in, and said any national scheme must be considered along with wider climate adaptation plans underway in the National Adaptation Plan.

Clark said he met with large insurers who assured him they did not plan to move to more risk-based premiums in the immediate future, allowing more time for consideration of any intervention by the government.

"It would be concerning if homeowners were unable to access adequate insurance for flood risk and this is something the government continues to actively monitor," he said.

Nevertheless, a December 2021 Treasury report said almost all insurers were investigating new risk models and considering price changes for the next year or two.

It said all insurers were moving toward greater risk-pricing.

Insurers currently do not price future risk into current premiums.

It was worth noting that the government, local councils and property owners would be likely to put some mitigation in place in the coming years to temper the effects of sea level rise - which will also extend the life of insurance cover.

Earlier in 2022, the government released the draft version of its plan for a nationwide strategy to deal with the effects of climate change (the draft National Adaptation Plan).

It said the government was looking at "potentially supporting a national flood insurance scheme for residential buildings", and cited the UK flood scheme Flood Re as a case study.

But the final version of the plan walked that back somewhat, and it said the government was "developing options for home flood insurance".

"This work includes exploring options to support access and affordability of flood insurance."

A Treasury report from March 2022 said the group responsible for the climate response wanted to see a full set of options (including a Flood Re model at a high-level) before deciding whether to proceed with any insurance intervention.

Treasury officials agreed with insurers that the government should look at "targeted and time-bound" solutions for high-risk locations.

Where to from here?

Treasury's substantive advice is expected to be given by this or next month, with decisions from Cabinet on the next steps due by the end of 2022.

It is likely legislation will be required to implement an insurance intervention.