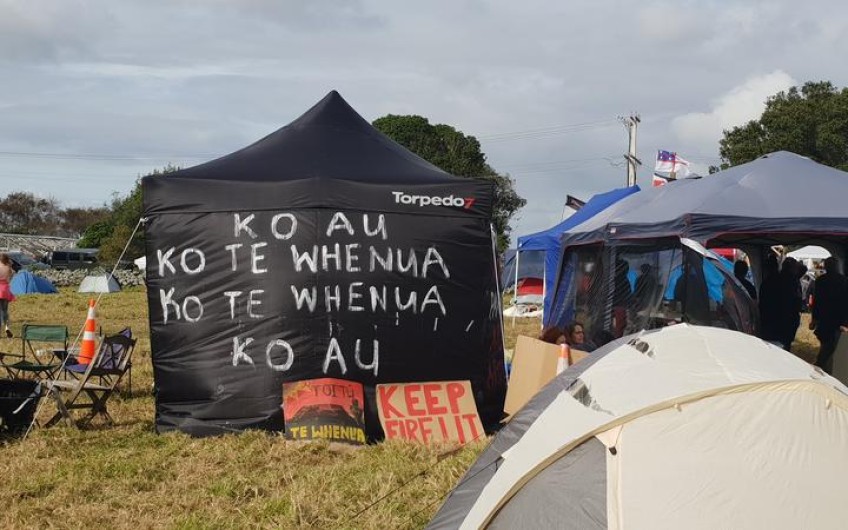 Ihumātao protests: 'We need to be here to show solidarity'

People are taking time off work to occupy the land at Ihumātao again this week, despite assurances by the Prime Minister that construction will halt until the land dispute is resolved.

The fight to protect the 32 hectare land block in South Auckland from a new housing development continues to receive growing support.

Mana whenua and private land owners have been asked to engage in further negotiations to find a way forward, but aren't giving anything away ahead of talks.

It has been a week since police served protesters with an eviction notice, but people continue to pour into the site to join those on the frontline.

More than 100 tents remained last night, with tamariki wrapping themselves in blankets and huddling around fires as they prepared for another cold evening under the stars.

Our reporter at the scene Meriana Johnsen was told that at least four of the people sitting on the frontline at Ihumātao had quit their jobs to be there, because their employers wouldn't allow them to take time off work.

Angel, from West Auckland, set up camp there on Thursday and doesn't plan on leaving anytime soon.

"No work, forget work, I'd take my life off for this," she said.

"This moment, for my people, we need to do this and we need to be here to show solidarity."

Denise Kay was there with her five mokopuna and said they wouldn't be going to school this week.

"They're learning all about the history of this place and their ancestors. That's more than their school can produce," Ms Kay said.

"They have been totally educated and learnt about their own whānau. They don't really teach the history of land in New Zealand at school anymore."

The government has taken a U-turn on its decision not to intervene in the dispute, announcing on Friday it would halt the construction of the housing development until a resolution between mana whenua and private land-owner Fletcher Building is reached.

Neither side agreed to be interviewed by RNZ about when negotiations will take place, or what they will look like, but the move has given protesters like Pauline Nathan some hope.

"Our desired outcome is to reclaim our whenua, our wāhi tapu, and that we can go on and enjoy our whenua the way that it is," she said.

Finding a resolution to the land dispute won't be easy.

Its mandated iwi group - known as Te Kawerau Iwi Tribal Authority - supports the development, having made a deal with Fletcher Building to have eight hectares of land returned to their people.

But others within the iwi - like whanaunga Teraiwi - want the land protected.

"I was born and raised here. I am from here. That is why I've come, to support my whānau," Teraiwi said.

"This area around here is all tapu, that's why were all here. My uncle Warren, he did all this. He went behind our backs. Its really sad, just really sad."

Veteran Māori rights activist Hone Harawira was at Ihumātao over the weekend and told Morning Report it's "different" from previous protests he has been involved with.

"With the experience with social media, with a lot more of our young people being fluent in te reo and aware of their tikanga, they are showing a lot more energy a lot earlier on."

Mr Harawira said he is hoping for a similar outcome that was achieved as a result of the occupation at Bastion Point.

"Where as a result of everybody coming to Bastion Point, as they are doing at Ihumātao, we are able to save that beautiful whenua so it's going to be there for the enjoyment of all forever more."

Mr Harawira said he would like to see the Crown involved in seeking a good resolution for all parties.

"My thinking is the Crown does a 'nudge nudge wink wink' with Fletchers," he said.

"Fletchers is big enough and ugly enough to know that their future is also tied up in how well they manage this issue."

The government was being careful not to disregard the wishes of the mandated iwi group, and was so far refusing to say whether it is considering buying the land back.

But Professor of Māori studies Margaret Mutu - a veteran of the Bastion Point protest in the 1970s - said solving the land dispute at Ihumātao was actually quite simple.

"You just need to get sensible. This is a wāhi tapu for heavens sake. If you violate this wāhi tapu, particularly by building on it, people will get hurt. And that's what mana whenua understand," Ms Mutu said.

Main Image: "I am the whenua, the whenua is me": Many campers have decorated their tents with whakataukī. Photo: RNZ / Meriana Johnsen