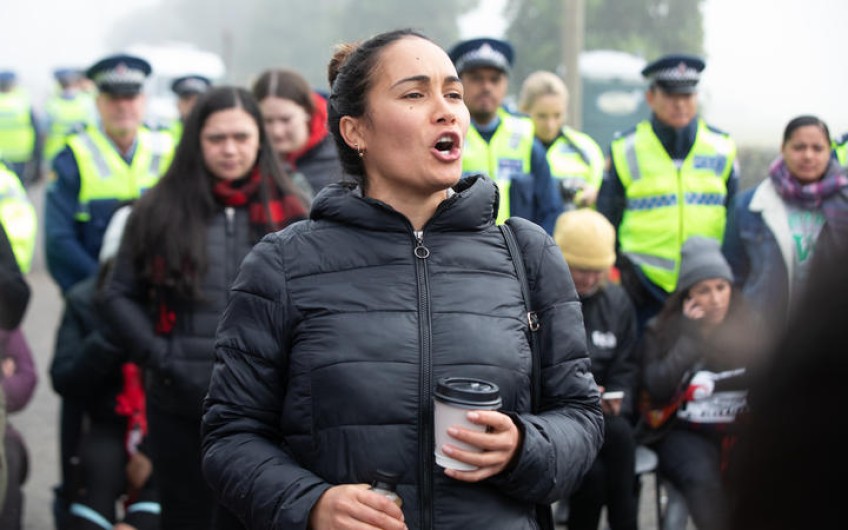 The increased police presence at Ihumātao last night was very intimidating and there was a five-hour standoff, protest leader Pania Newton says.

Dozens of police officers lined up last night, blocking Ihumātao Quarry Road, with crowds of land defenders standing in front of them.

Ms Newton said police cordoned off the road and separated one camp, which was the front line, from the other and threatened to trespass and arrest the occupiers.

"We're not too sure why, it was very unexpected," she said.

"It was very intimidating... I was concerned about the safety of the people."

"There were hundreds of people in the dark roaming the land. They were all here to protect it," Ms Newton said.

"There were many [police] in the paddocks, many on the front line, there was a very strong presence."

Ms Newtown said there was a bit of "pushback" and "aggression" from police when she went through a gate to check on younger protesters.

"I was coming through the gate and a police officer ran over and pushed the gate against me and I stumbled onto the ground and a lot of people rushed over and were very concerned.

"But luckily enough we were able to take control of the situation and everyone kept peaceful and calm."

Prime Minister Jacinda Ardern said the government was not involved in decisions made by police at Ihumātao.

Ms Ardern told Morning Report she understood police were concerned about a particular part of the site that was subject to a court order.

Police have yet to respond to a request for comment this morning, but last night Superintendent Jill Rogers that more officers had been deployed.

"The decision has been made to deploy additional police officers to maintain order and ensure there is no breach of the peace.

In an additional statement to RNZ, police said: "This was an operational decision to ensure safety."

A police spokesperson said there had been no arrests made nor trespass notices issued. Police would not specify how many extra officers had been deployed.

She said senior officers at the site told her they didn't agree with the increase in numbers and were looking at de-escalating but needed direction from the top.

"It took many hours - there was a standoff for about five hours."

Ms Newton said hundreds of supporters turned up once they saw live video of the incident.