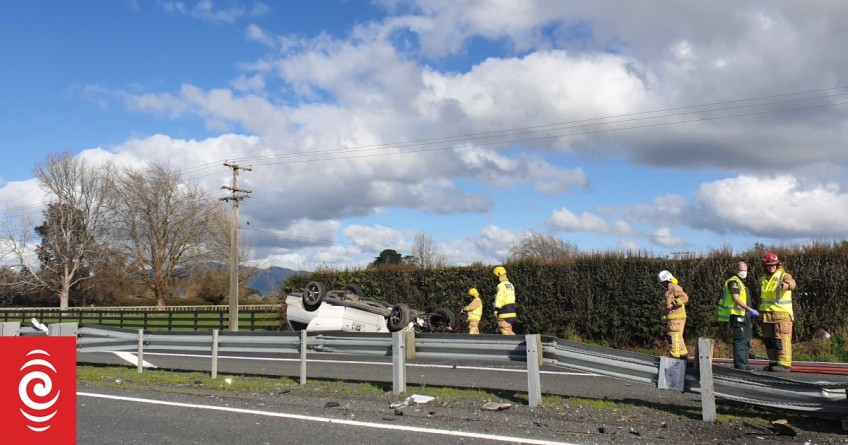 Government road safety strategy fails on all but one target

The government's strategy to reduce road deaths and injuries failed to meet all but one of its targets with breath testing and reducing speed limits lagging the most.

It comes as the country's annual road toll reaches 333 deaths, surpassing last year's and heading back towards 2018's terrible benchmark of 378 road deaths.

Waka Kotahi's annual report shows only one of six measures for the Road to Zero strategy were met for the year to the end of June.

It is working with the police and other agencies, including WorkSafe and local government to reduce road deaths and serious injuries by 40 percent by 2030, from 2018 levels.

AA road safety spokesperson Dylan Thomsen said he was disappointed the country's annual road toll was now heading back towards 2018.

"We're going to be three years into the Road to Zero strategy and we're looking at road deaths being about the same level as that benchmark for our starting point. That indicates we have not made that much progress over the years which is really disappointing."

Waka Kotahi said the number of deaths and serious injuries were still "unacceptably high" but it was on track to achieve the 2030 Road to Zero target. There were 2598 deaths and injuries on the roads in the year to the end of June, compared with 2757 the previous year.

The agency said although progress had been made toward reducing the number of people killed on roads, several of its key programmes were underperforming and it would need to lift its performance.

Passive breath tests and screening fell short of the target by almost a half, with 1.6 million tests against a target of three million.

Waka Kotahi said this was "well below desired levels" due to police being redeployed to help with the country's Covid-19 response at regional border checkpoints and in MIQ facilities.

"As we come out of Covid now we are expecting to see that alcohol testing number back up around the three million where it is targeted to be. If that doesn't happen it's going to be hugely disappointing."

It is not the first year the Road to Zero strategy has failed to meet all its targets - last year it was far off its targets for highway safety upgrades, which it is still behind on.

Waka Kotahi's annual report said only 165km of road had reduced speed limits imposed, compared to a target of 500km, due to community engagement taking longer than expected.

It met its target of starting safe system interventions at four intersections, was short on mobile camera hours due to camera breakdowns, was one project short of meeting its target for infrastructure safety projects and its success rate for safety ad campaigns, and was just shy of a 86 percent target due to its narrow focus on traditional advertising channels.

The agency said it would work with its Road to Zero partners to "lift our delivery performance for our infrastructure and speed management actions, vehicle safety, road policing, and road safety advertising and education".

The annual report also covers state highway and local road improvements, which fell short of targets in some cases due to ongoing Covd-19 impacts such as supply chain disruptions, cost escalation, and increased time taken to obtain consents and approvals.