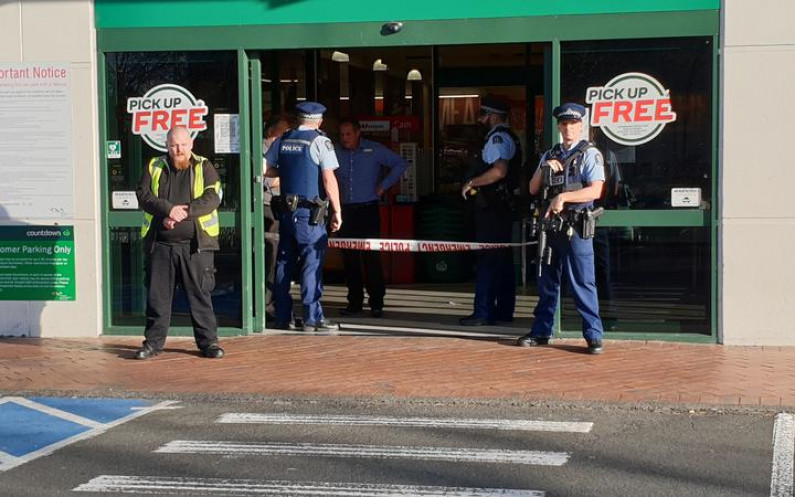 The stabbing of four people this afternoon is believed to be a random attack. The alleged offender has been taken to hospital with injuries, and has not yet been charged.

Police district commander Paul Basham said they received the first of many calls about the attack at the Countdown on Cumberland Street in Dunedin just before 2.30pm.

He said there were four victims, and a man who had been detained by members of the public before police arrived.

The man had a minor injury and would appear before the courts tomorrow, Basham said. Police were satisfied they had the person responsible in custody, he said.

Countdown corporate affairs manager Kiri Hannifin earlier confirmed there had been people stabbed - two of them employees - believed to have been at the health and beauty area near the pharmacy.

In a statement, Southern DHB said five people had presented to the emergency department and were being assessed and treated.

"Four patients are being admitted to hospital in a serious condition, three to the ICU and one to general ward. One patient is being treated in the emergency department."

Basham said three of the victims were in "status one" and were going into surgery this afternoon.

Police closed the store down.

One witness said she believed the attacker was on drugs. Another said a man was having a psychotic episode and used two knives to stab people before being disarmed by others in the store including staff.

Bystander and well-known 'jailhouse lawyer' Arthur Taylor told Checkpoint he was about to go shop for his dinner.

"More police cars kept arriving, ambulances, they took a guy out covered in blood ... apparently not his own blood. Carted him off somewhere."

He said he only caught a glimpse of the man, as police were moving bystanders further away in the carpark.

Basham said the alleged attacker was under guard at Dunedin Hospital, and was expected to be returned to the police station tonight or early tomorrow.

The minimum charge was likely to be wounding with intent to cause grievous bodily harm, he said.

"I expect, depending on when he's seen at the hospital, he will come back to the police station here tonight and he will be formally charged this evening or first thing tomorrow and appear in the Dunedin court tomorrow morning, if all things go to plan."

Dunedin Mayor Aaron Hawkins said the incident was not something he would expect to unfold in his city.

"Everyone should feel safe in their place of work or going about everyday tasks like grocery shopping. These sorts of events are particularly chilling because it could have been any of us or our friends or family - it's a busy location in the centre of the city."

'We believe this is a random attack' - police

Basham said the investigation was in its early stages, and the scene was locked down, but the attack was believed to have been random.

"On the face of what we know we believe this is a random attack."

"It is nothing short of heroic, I have before I came to speak to you this afternoon viewed the CCTV footage which is quite traumatic and what I can say is that those who intervened - some of whom became injured themselves - have acted selflessly and with great courage to prevent this man from hurting anybody else and indeed I think they did just that.

"This was a fast-moving and extremely traumatic event for every person in that supermarket - the victims who were injured, those present who tried to intervene and those who had to flee to a place of safety."

He said police were seeking to establish the identity of our victims and to get in touch with their next of kin.

They were working to compile witness information and collecting CCTV footage, he said.

People with information, including video footage, were encouraged to contact police on 105 and quote event number P046456846.

Nothing to suggest domestic terrorism - Ardern

Prime Minister Jacinda Ardern, speaking after a Cabinet meeting, said there was nothing to suggest it was a domestic terror event.

"Needless to say, such an attack is hugely concerning and I do want to acknowledge the really early report of courageous acts by bystanders."

"Our thoughts are with all those who've been affected by this attack."

She said police were still working through the motivation of the attack.

"They want to have a bit more time before they make public statements on that," she said.

Police were not looking for any other individuals and there was no reason to believe anyone else is involved, Ardern said.

"There is nothing to suggest there is more than one person involved at this stage."

St John Ambulance said all the injured were taken to Dunedin Hospital, three in a critical condition and one in a serious condition.

Hannifin said the company was trying to support the two injured team members and their family and also the rest of the store.

"We are obviously trying to support those two team members and their families and the other people at the store who are in a lot of shock.

"It's an absolutely terrible situation."

She said there has been 13 to 14 months of increasing violence to supermarket staff, including horrendous verbal abuse.

"There was a 600 percent increase during Covid-19 and about 300 percent since.

"It's just the most horrendous verbal and physical abuse. On Thursday night, someone tried to burn down our store in Henderson while our team were working in it.

"Every day in we have in our stores an assault of some variety. There seems to be no rhyme or reason apart from a complete disregard and lack of respect for our people."

"It's unacceptable violence and now this. It's incredibly distressing and a customer's been injured in the process as well. We can't seem to do enough to keep our people safe. It takes my breath away. I've got no words really.

"I don't really know what to say apart from, it's a shocker."

She said Countdown has thus far been unable to find a pattern or reason for the increasing violence.

"It happens mostly during the day. In some areas more than others. When we have guards, it doesn't seem to make a difference."

"There seems to be no ryhme or reason apart from a complete disregard and lack of respect for our people."

"I'm having trouble ... to talk to the managers in the store but I'm having trouble getting much out of them because ... they're in shock, but also trying to deal with injuries of those customers and teams. I'm in quite a bit of shock myself."

Basham said police would be looking at any increased security at supermarkets.

In a statement, Countdown said it was "shocked and devastated" by the events, and its priority was the injured members of staff and caring for their team.

The supermarket chain said there were concerns about escalating violence towards staff members.

"This is something we have continued to talk and raise as an issue over the last year.

"Our amazing team comes to work to serve Kiwis every day, and our customers visit our stores knowing that they will be safe. We are heartbroken that this wasn't the case today."