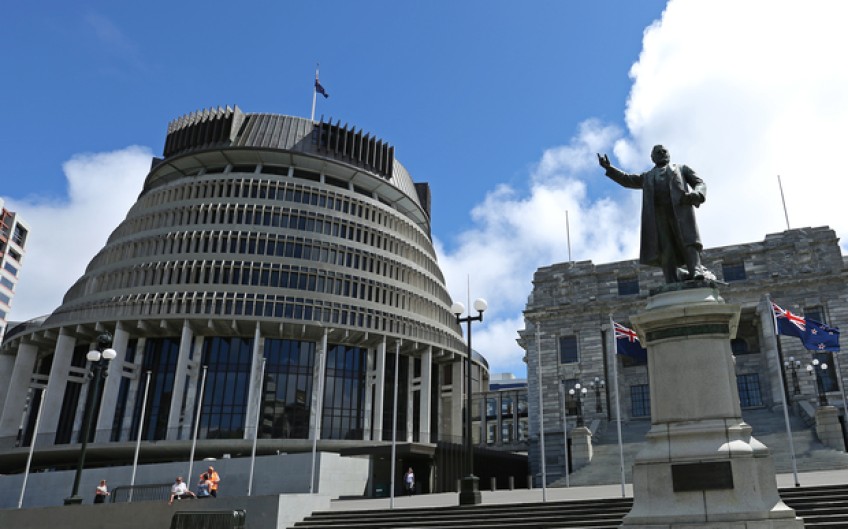 Covid-19: Government releases hundreds of documents on its response

The government has released a wealth of material related to its response to the Covid-19 pandemic.

As Covid-19 spreads around the world, it can be daunting keeping up with the information. For RNZ, our responsibility is to give you verified, up to the minute, trustworthy information to help you make decisions about your lives and your health. We'll also be asking questions of officials and decision makers about how they're responding to the virus. Our aim is to keep you informed.

The release of more than 300 documents includes papers, minutes and advice to most sectors of the government from January until 17 April.

One of the earliest papers dates back to 28 January, when a cabinet minute discussed a low risk to New Zealand but a potentially serious risk to public health.

Customs advice on 5 February on re-opening eGates to some international flights said the Ministry of Health was "satisfied that flights arriving from Australia, Singapore and the United States pose minimal risk of carrying anyone who has been exposed to the Novel Coronavirus and is asymptomatic."

"Re-opening eGates to passengers with eligible passports arriving on these flights will result in quicker processing, reduced delays to passengers and a lessening of the impact on frontline resources."

More than half of all the flights arriving in New Zealand were people from the US, Singapore and Australia.

The day before the advice, 18,686 passengers arrived in New Zealand.

The Temporary Accommodation Service got roughly half of the $15 million funding boost it said it needed to quarantine thousands of people.

The Ministry of Business, Innovation and Employment sought the funds to cover emergency accommodation for those arriving in New Zealand from overseas.

Before it had even got the money, it paid a company $2 million to secure 2000 campervans, and booked hundreds of hotel rooms.

But Cabinet granted it just $8 million on 3 April.

Officials in early February had no accurate information on how many offshore Chinese nationals held valid work visas for New Zealand.

The Ministry of Business, Innovation and Employment's advice to Minister of Immigration Iain Lees-Galloway offered options for travel restriction exemptions.

Ministry of Health advice to Prime Minister Jacinda Ardern on 2 February discussed the evidence of the severity of the infection.

"Currently the evidence is that this infection is only severe and life threatening for a minority of those infected. However, we know that viruses mutate over time, which can change their ability to transmit and the severity of the illness that they cause," the advice read.

"While vaccine development is underway it will take some months at a minimum before a vaccine would be widely available."

The government allocated $200m for sourcing PPE, $35m on essential medicines, $15m for the Unite against Covid-19 campaign, and $26m for aged residential care providers.

Within days of Covid-19 becoming a notifiable disease in New Zealand, 16 suspected cases were under investigation by health officials.

At the time, there were no confirmed or probable cases in the country, as the disease was confined to China.

The virus was classed as a notifiable disease in New Zealand on 31 January.

At the time, nine suspected cases had returned a negative result; 20 were classed as non-Covid illnesses and the other 16 were being investigated.

In mid-March, the government believed it could manage contact tracing for 10 active cases - but there were more active cases than that in New Zealand.

The document setting out NZ's health "architecture" said it could manage 700 tests a day as of 17 March, and had enough contact tracing capacity estimated at 10 active cases.

But that day New Zealand announced it had 11 confirmed and two probable cases of Covid-19.

The architecture document was drawn up to the day that the government released a $12.1 billion spending package for business and jobs.

Officials would rely on carers and support workers to contact trace if a rough sleeper contracted Covid-19, documents show.

A cabinet paper released by the Prime Minister today said it would be difficult to trace the contacts of homeless people.

It said this was because they typically socialise on the streets and at drop-in facilities.

The paper noted that carers and support workers would need to "follow their noses" if contact tracing of homeless people was required.

It said self isolating and physical distancing was challenging for the homeless community.

The National Management Crisis Centre told the Covid-19 Ministerial group on 15 April that they didn't have confidence in the reported rates of community transmission.

In a weekly briefing, the centre said there was undetected community transmission around three weeks earlier, but they didn't know how widespread.

It told the government there were gaps in the data making it harder to prepare the report.

It said a significant amount of cases had missing information and others had been under investigation for a long time reducing its confidence in the data on cases of community transmission.

Initial advice to the government said international findings were that for every case discovered, nine others could be missing.

In a ministerial group document on 20 March, the document stated there was likely silent transmission at the time, but all the confirmed cases were imported from overseas.

The group was warned if transmission became widespread, the country would lose the opportunity gained by closing the border.

Opposition to suggestion of removal of GST

Inland Revenue and Treasury had strongly opposed any suggestion of removing GST to bolster the economy in lockdown, the documents show.

A report from early March labelled "Sensitive" argues against any proposals to remove or defer paying PAYE or GST.

IRD said it could create significant administrative issues and that enforcement issues could arise later.

Officials told the government that removing GST would benefit unaffected taxpayers and be no benefit to exporter or taxpayers getting refunds.

Ruling on alcohol stores during lockdown

Cabinet was advised liquor stores could operate in a way that was consistent with public health requirements.

It said there was a risk, that in areas where liquor couldn't be purchased at supermarkets, people with addiction issues could be implicated.

The paper showed that police were also concerned a scarcity of alcohol could lead to stockpiling or a run on liquor stores in the lead up to lockdown.

Cabinet was also advised closing liquor stores could result in people travelling out of their town to get alcohol, impacting the ability to contain transmission.

Cabinet later decided to deem liquor-stores non-essential, except in places where alcohol cannot be purchased in supermarkets.

The future of this country's rock lobster industry and its near total reliance on the China market, was the most immediate concern facing the primary sector in early February, after the outbreak of Covid-19 in Wuhan.

The Ministry for Primary Industries outlined the likely impact on all of the country's primary sector exports, but rock lobster was of the most concern at that time.

MPI proposed an amendment to the regulations to allow the industry to roll-over up to 10 percent of its annual uncaught catch entitlement into the next season which started on 31 March.

This was subsequently approved by Cabinet, but the industry had asked to carry-over all uncaught quota.

The Ministry of Social Development put the cost of increasing unemployment and other benefits at $2.3 billion over the next four years.

The $25-a-week increase came into effect in April, and was the largest one-off change in benefits in several decades.

The ministry estimated the move would benefit 350,000 low-income households.

The decision to double the winter energy payment will cost an extra $480 million this year, affecting about 800,000 people.

Cabinet rejected a recommendation from the Finance Minister to scrap the wage subsidy threshold for struggling businesses.

Companies need to have suffered a 30 percent drop in revenue to be eligible for the wage subsidy.

In late March, Grant Robertson recommended to Cabinet that this criteria was scrapped, to open it up to any business.

However this did not progress past Cabinet.

Officials agreed with the minister, saying the goal of maintaining employment was best achieved by opening the scheme up to any business struggling to pay wages.

Officials said they could not accurately forecast how much extra this would have cost.

The initial wage subsidy cap of $150,000 per business covered less than half of the workforce.

A paper to Cabinet successfully proposed removing the cap, to increase how many people were covered by the scheme.

Officials said a $150,000 cap was not likely to be expansive enough to prevent widespread redundancies.

The cap was completely lifted, with no limit, on 23 March.

More than $10b has been spent on the scheme, including almost $52m for one large recipient, The Warehouse.

On 23 March, Cabinet authorised the Finance and Education Ministers to approve $36.44m so students could work online from home if they were in lockdown, or if their school was closed.

However, after more calculations, the cost rose to $51.34m, according to a paper dated on 7 April.

In another document on 2 April, Chris Hipkins was told by the Ministry of Education that about 82,000 households were without proper internet access - so that disadvantaged about 145,000 school students.

The ministry told Hipkins it was addressing that issue by connecting households with internet and distributing devices to use at home, as well as hard copy education packs.

It was also agreed that TVNZ would begin broadcasting education segments for at least three months.

On 2 April, the ministry warned Hipkins it was already hearing of students withdrawing from tertiary education and moving to the welfare system because that provided them with more financial support.

In that document, it was agreed that students would continue to receive student allowances, as well as increasing course-related costs.

On 2 April, the minister was again briefed about tertiary students.

The ministry document said there were currently more than 300,000 students enrolled in tertiary education.

It said about 160,000 students received financial support from the Ministry of Social Development.

The document said student groups and tertiary education providers were reporting that students were looking to withdraw.

However at that date, it said it was too early to tell how many students would leave.

In a briefing in April, the ministry also told Hipkins that the lockdown was also a chance to accelerate its plans for digital transformation of schooling, and the experience would also significantly strengthen relationships between teachers and families.

It said that if it responded well, the lockdown was an opportunity to make the education system more inclusive, equitable and digitally-connected.

The rules around witnesses for wills, oaths, declarations and affirmations all had to be relaxed to allow for Covid-19 restrictions.

In a document from the Minister of Justice released today, it said it would be impossible or impracticable to comply with the requirements and restrictions expected under the current laws.

That meant the requirement that will-making be witnessed by two people in the presence of the will-maker was changed to the witnesses signing remotely via audio-visual link.

The paper outlined flexibility was particularly important around wills, given older and more vulnerable people, would be wanting to get their affairs in order at a time when an epidemic was sweeping the country.