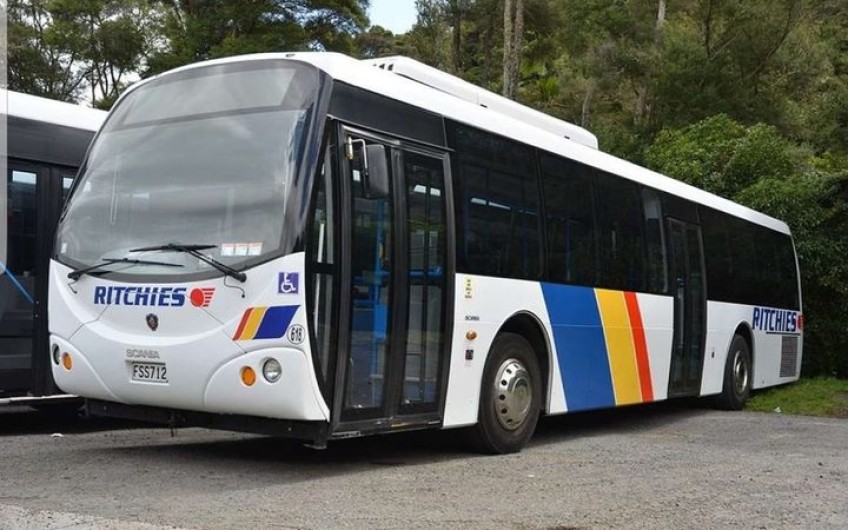 By Laura Walters for Newsroom

Bus company Ritchies has come under fire by staff and the union after its bid to bring in 110 drivers from overseas was rejected.

Last year Ritchies, which holds major passenger transport contracts in Auckland and other parts of the country, applied for an approval in principle (AIP) to bring in 110 bus drivers from overseas to fill a driver gap.

It asked for pre-approval to hire up to 80 drivers for Auckland, 15 for Dunedin and 15 for Queenstown.

The company, which is one of the biggest in the country, and shares owners and directors with other major companies like Ritchies Murphy and Birkenhead Transport - was looking to recruit drivers from Tonga, Fiji, Samoa and the Philippines.

Documents released to Newsroom under the Official Information Act show the labour market test undertaken by Immigration New Zealand revealed widespread concerns the company's low hourly wage and unsociable work hours, which include split shifts, were to blame for its inability to attract and retain drivers.

The documents show lengthy consultation and streams of emails, where immigration officials, FIRST Union and Ritchies went backwards and forwards over the applications and the state of the industry.

Ultimately, Ritchies was given the go-ahead to hire up to 10 overseas workers to drive buses in Queenstown and another 10 in Dunedin. The company was denied its bid to bring any drivers to Auckland.

The attempt to use migrant workers to help stem the bus driver shortage in New Zealand comes as the industry faces an employment crisis.

Low wages and poor conditions, including split shifts, is behind what's repeatedly been described as "a race to the bottom".

Immigration, and Workplace Relations Minister Iain Lees-Galloway, and Transport Minister Phil Twyford have voiced their concerns surrounding the state of the industry, and the low wages and poor conditions faced by drivers.

Now councils, bus operators and unions are working together to implement a 12-month trial of a flexible paid break system, and Mr Twyford has committed to universally introducing the living wage, in an effort to drag up those at the bottom, and take a step towards addressing longstanding industry issues.

Ritchies has the lowest wages of any bus operator in the country - about $20.60 an hour in Auckland, compared to between $22 and $23 elsewhere. FIRST Union said Ritchies was known in the industry for its low wages and unsocial hours - something Ritchies rejects.

Ritchies director and shareholder Andrew Ritchie did not respond to Newsroom's requests for comment.

The emails and application documents show the company attributed its lack of bus drivers to "a very healthy economy and tourism industry".

Ritchies said there was a shortage of workers across nearly all industries, including the bus passenger transport industry, refering to the low unemployment rate.

The company pointed out it ran driver training programmes and was working with prison reform group the Howard League to recruit people who had been released from prison.

"Would just like to point out that we are not a large foreign owned multi-national company that pays the minimum wage. We are a 100 percent NZ owned family business. We have a very low staff turnover and people work for us because of our family values and the way we treat our people," Ritchies said in an email in April 2018.

"Of course a union is going to seize the opportunity, start jumping up and down, when we are looking to source more drivers and they are preparing to negotiate a collective agreement. It does not detract from the extreme shortage of drivers across the heavy transport industry, which includes both freight and bus passenger transport."

Meanwhile, FIRST Union publicly opposed Ritchies' application, and in consultation with Immigration, said it was concerned employment conditions, including below-industry wages and unsociable hours, would deter suitable and trainable New Zealanders from working and remaining with the company.

Under the current tender system used by councils as part of the Public Transport Operating Model (PTOM), introduced by the former government, cost was the biggest driver, which incentivised bidding bus operators to keep costs low - about half of a company's costs were on labour.

"FIRST Union is deeply concerned that if Immigration New Zealand were to accept this application it would increase that pressure as employers would seek to employ migrant workers for the single reason of reducing wage costs," it said at the time of the AIP application.

Meanwhile, the labour market test also found Work and Income New Zealand (WINZ) had a pool of potential drivers with the necessary licences who were able to be recruited from within New Zealand, and particularly the Auckland area.

Immigration ultimately said it was concerned about the pay and conditions offered by Ritchies, compared to other bus operators.

Mr Abbott questioned whether Ritchies was fit to run a publicly funded service, given its low wages, conditions, split shifts and safety concerns.

Other operators would like to lift wages, however, that would put their contracts at risk in the current climate, he said.

Minister for Immigration and Workplace Relations Iain Lees-Galloway said no one won from a race to the bottom - "that approach is unsustainable".

"I have laid down a number of challenges to industry, and they apply to bus companies too."

Before they reached for immigration to fill gaps they needed to be planning for their labour force needs, supporting Kiwis into jobs, paying decent wages and providing good conditions, he said.

Mr Lees-Galloway said he was working across agencies to create "a more productive, sustainable and inclusive economy", which included better workforce planning across the country.

The government was also aiming to create a more robust system to meet regional labour needs, without reaching for immigration as a first resort, he said. This was part of a wider discussion as part of the employer-assisted work visas and regional workforce planning consultation across sectors.

Ahead of the 2017 election, Labour and NZ First both committed to lowering migration but the numbers have not drastically changed, with net migration at 56,100 to March 2019.

However, it has focused on clamping down on migrant exploitation, targeting regional skills shortages, and upskilling New Zealanders in the regions to stop employers from looking offshore.

Future of transport system at stake

Meanwhile, Transport Minister Phil Twyford said everyone in the industry would confirm there was a bus driver shortage. The lack of drivers had led to mayhem in Wellington, with services cancelled.

Mr Twyford wholly attributed the issue to the current labour market, where wages and conditions do not make the job attractive to New Zealanders.

He said the industry was imperative to creating a 21st century, high-performing transport system, but there needed to be enough people to do the jobs.

A forum tasked with resolving issues around paid rest breaks and dealing with the longstanding issues of pay and hours will have access to resources from NZTA and the Ministry for Transport.

And while Mr Twyford and the unions said this was not the final fix, it was a step in the right direction.

This story was originally published by Newsroom