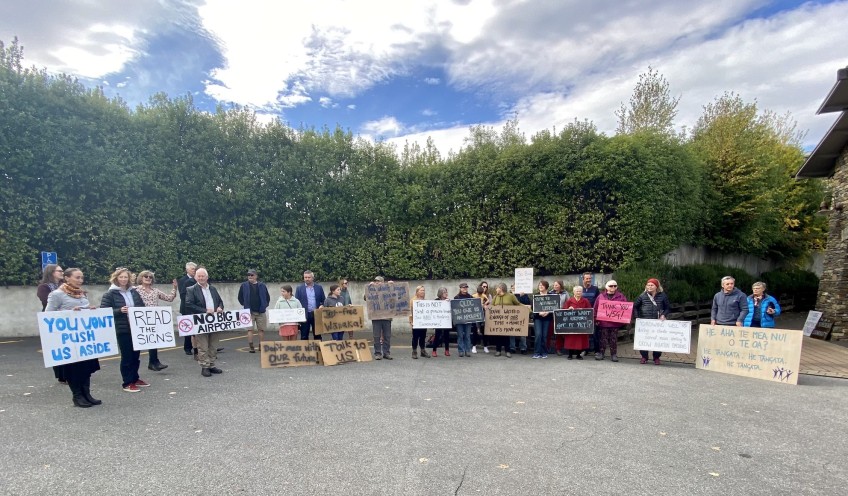 “You must do better” - Wanaka residents put QLDC on notice

Demands for transparency around decisions relating to the future of Wanaka Airport dominated Thursday’s council meeting, with residents rallying outside to ensure councillors got the message.

A week ago the High Court ruled the 100-year lease of Wanaka Airport by QLDC to Queenstown Airport Corporation unlawful, but that decision hasn’t resolved the community’s concerns.

In fact, the decision and the council’s response to it have triggered a new wave of discontent over the council's apparent lack of willingness to genuinely listen to and consult with the community, with some residents saying they have no trust in council. 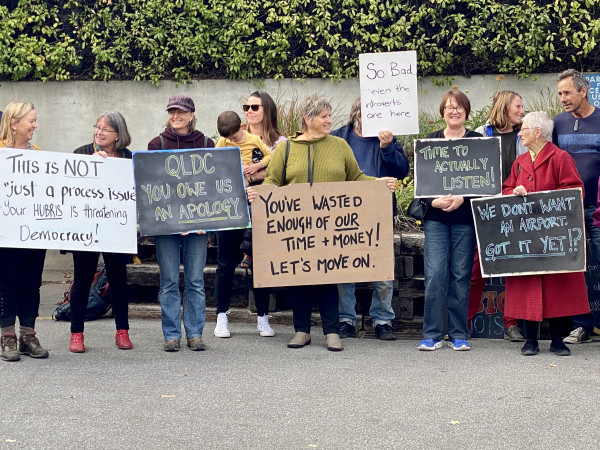 A typically Wanaka - peaceful and polite - demonstration of roughly 30 people met mayor Jim Boult and councillors as they arrived at their meeting at Lake Wanaka Centre, holding signs that included such messages as “QLDC you owe us an apology” and “You’ve wasted enough of our time and money! Let’s move on.”

As well as the demands for transparency, the demonstrators want the council to acknowledge the climate emergency and act accordingly, which means not building a jet-capable airport, organiser Anna Simmonds says.

“[The aim is] to show the council the community is engaged, interested and keen to get a fresh start, and start from a place where we’re not all in conflict.”

When asked if she thought the message was taken onboard, Simmonds paused, then said only “I’m hopeful.”

Jim Boult told protesters his intention in the wake of the High Court judgement was to “push the reset button and go back and have a fresh look at the issue.”

Crux asked Boult if this reset would include rebuilding the community’s trust.

“I'm here to do what I can to put facilities in place across the entire district that the community wants, and so I’m listening to what’s being said today,” Boult replied.

When pushed on whether he acknowledged the community’s mistrust in council, Boult replied, “I’d be blind if I didn’t see that.”

Jim Boult fields questions on the community's mistrust of his council.

Inside the council meeting the community’s voice continued passionately with a speech from Wanaka Stakeholders Group spokesman Mark Sinclair.

Within the three minute limit permitted by council for public submissions, Sinclair, speaking on behalf of 3500 members, told the council to “start again” by consulting openly on any plans for Wanaka Airport.

“Mr Mayor, despite what you tell people, we do represent the community - a sizeable chunk of it - and we do tell the truth.

“Councillors and QLDC executives, we are watching you, we will hold you to account and we will not go away.”

Several other spokespeople for the community followed Sinclair.

“How are you going to regain the trust of the residents of the Upper Clutha?”

“If you build a jet-capable airport in Wanaka, it is a direct contradiction of the climate emergency document that this council has agreed to,” Thorne said.

Tim Allen of the Cardrona Residents and Ratepayers Society urged council not to “find another route to ignore the ratepayers and build an airport that is frankly unwanted.”

“We feel that council has been myopic in its pursuit of tourism growth and blind to the wishes of the ratepayers, it’s been a waste.

“Please use this reality check to assess your motivations, your processes, and to ask yourselves who and what it is you represent.”