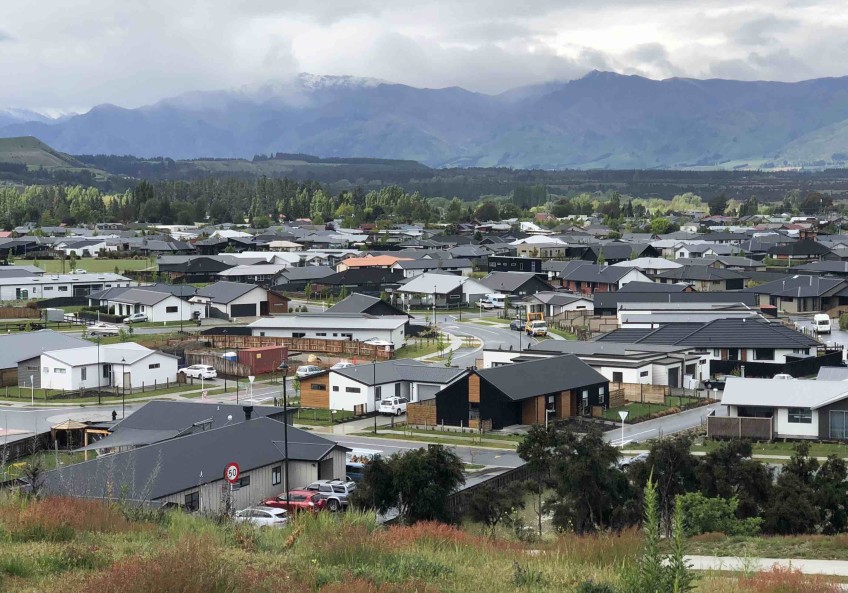 "Yes - in my backyard." A solution to Wanaka's housing issues 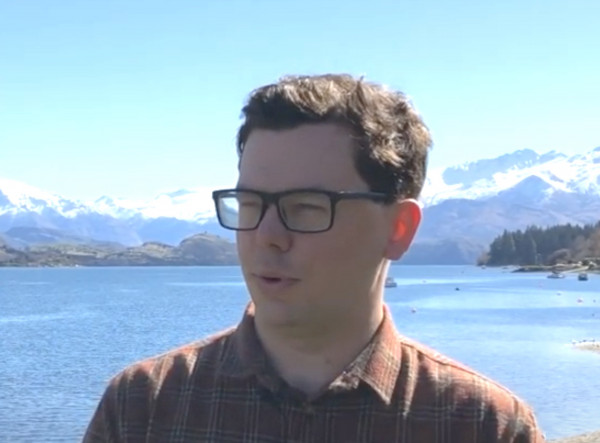 Lincoln Haworth - a Wanaka resident with both science and law qualifications

Lincoln Haworth has been studying the urban sprawl that threatens to not only destroy Wanaka's unique character but that is also bad for the environment and just about every other metric applied to town planning. He argues that higher density not only makes enormous sense, but can provide better living conditions than traditional housing. Lincoln has an interesting background that includes a number of skills - many of which have gone into this thought provoking article.

"In 1856 Catalan civil engineer Illdefons Cerdà proposed a revolutionary new plan for the city of Barcelona.

Inventor of the word urbanisation‘, Cerdà was a maverick and a visionary. He foresaw the future invention of a small, horseless carriage that would locomote around cities under its own power. He believed that the use of such a vehicle would be widespread and require a dramatic rethink of city planning. 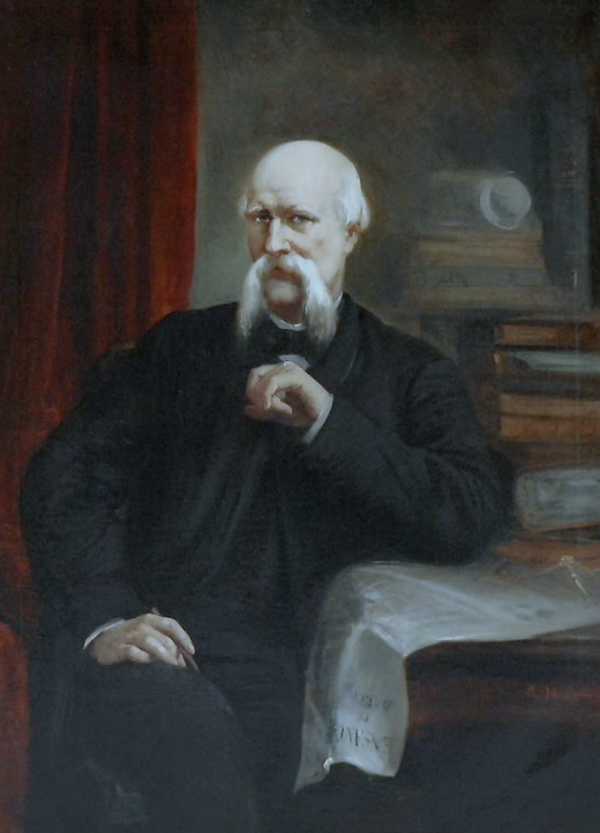 Illdefons Cerdà - A moustache that required an exceptional talent for planning for the future!

So Cerdà proposed a revolutionary plan for Barcelona‘s expansion: composed of square city blocks, with chamfered sides, creating an eight-sided pattern that spread across the district known as Eixample. Between these blocks would be a grid of roads for the hypothetical horseless carriages, and wide, long, straight, diagonal avenues would slice across, providing mass thoroughfares.

Eixample is now an attraction in itself. It has become a feature of one of the most desired and innovative cities in the world. It succeeds on both a practical level, and an amenity level – it‘s attractive, ordered, liveable, and, most importantly, functional.

Bikes wend their way easily through its roomy avenues – traffic is present, but not gridlocked – pedestrians enjoy relative ease of movement.

Perhaps less remarked-on, though, is the efficiency of Barcelona. It has achieved its remarkable desirability and aesthetic qualities while remaining one of the densest cities in Europe. Cerdà‘s Eixample has a stunning density of 360 people per hectare. Wider Barcelona comes in at 160pp/ha – reasonable – by European standards – beating out London and New York, and sitting only a little behind the famously dense Paris.

Eixample is only one case of the remarkable planning decisions that have achieved liveability in Barcelona, and we can look for other examples of coherent planning in cities and alpine villages across Europe. Places like Zermatt, Chamonix, Avoriaz and Verbier perhaps have more in common with Wānaka and Queenstown in terms of their size, their industry, and their geography.

Barcelona however is a great example of long-term benefits of coherent, dramatic planning. It was an industrial hub and growing rapidly in the 19th century. Drastic expansion of the city was needed to accommodate workers. Like those 19th century Catalan workers, Wānaka‘s residents are no stranger to rapid growth.

Similar to modern-day Barcelona, tourism is a huge sector of our economy, and preserving the aesthetic qualities of our town is high in our minds. It will take hard work to achieve a result that is timeless in its appeal, and a result that provides for the many people who we need to accommodate here, but if we enable investment, it is feasible to get the process under way.

You can contrast remarkable, coherent approach of the Catalans, with the bizarre and piecemeal system of the Queenstown Lakes, where rapidly-shifting ideologies and polarised, competing worldviews have cobbled together a nonsensical and seemingly random planning regime.

Too many decisions end up being made by judges and commissioners, who have no particular expertise in the necessary ingredients of a sensible town plan. Though, the professional planners themselves still seem to belong to a menagerie of competing ideologies.

In the Murky Depths of Wānaka’s House Mines, An Argument About Politics Breaks Out

―Never, ever be afraid to make some noise and get in good trouble, necessary trouble."

House prices have skyrocketed as a consequence of classical supply and demand mechanics – where supply is limited, and demand is fuelled by increasing population, increasing international attention, and changing lifestyles, then prices will inevitably rise.

Introducing competition into a market is the correct way to drive prices down. It‘s a law of economics as old as Adam Smith. Competition always benefits the consumer. Best of all, a bit of competition will make any monopolising, ―exclusivity-touting property developer turn from ardent capitalist propertarian into a furious NIMBY in a blink.

In the case of construction, competition has to find a way to benefit the consumer without degrading other quality-of-life issues like traffic or the environment. Those are the main reasons new developments frequently face strong resistance in this district.

We can create value by increasing the number of purposes a piece of land can be used for. The use of a piece of land is determined by its zoning, which is set by the Council. If we apply more permissive types of zoning – Medium or High Density Residential – that can boost that land‘s value and create a market for living space that is actually competitive.

If we can do it with the boldness of design of Illdefons Cerdà, the attraction can be immortal. I contrast European urban density with the drab cookie-cutter 1950s suburbia's of Los Angeles that still look as awful as the day they were built. Developments like Northlake are destined for the same remarkably timeless lack of appeal.

Currently only a tiny segment of Wānaka benefits from more permissive zoning. The land adjacent to Lakeside road is the only High-Density zoned land in Wānaka. It also happens to be a landslide-prone bog requiring enormous expenditure to stabilise, and the apartments under construction sit around the $2 million mark – hardly affordable.

I‘m being a little unfairly critical of QLDC. There are positive moves afoot; Stage 3 upzones parts of Wānaka to Medium Density. However, unfortunately there‘s not much semblance of an ordered plan, or any real desire to seriously stoke the fires of market competition. 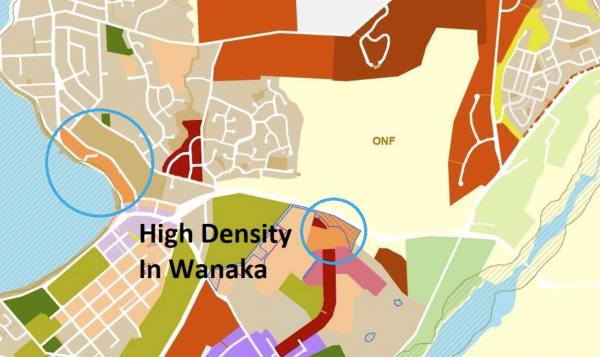 The two areas of High Density Zoning in Wānaka – the area on the right is not yet approved, and is going through appeals to Stage 3 of the new District Plan.

The two areas of High Density Zoning in Wānaka – the area on the right is not yet approved, and is going through appeals to Stage 3 of the new District Plan.

Take Minneapolis in the USA – radically, largely the entire city has been upzoned, permitting upwards construction and reducing the restrictions that limit more intensive use of urban land.

Better yet, axe some of the zoning types off the current list (there are 28 types of zoning in the QLDC). I challenge the QLDC to first eliminate 8 of them, and introduce a brand new urban zone. A modern beast that allows flexibility to alleviate the crisis, somewhere between medium-and high-density. We don‘t necessarily need to build apartment blocks everywhere, just allow urban landowners a little more leeway in how they use their sections and buildings.

It’s Getting Hot In Here, or, why Captain Planet is a YIMBY

Climate change is on my mind here. Density is the greenest way to build for two reasons: first is the reduced effect on habitat and wilderness, that I previously mentioned.

The second is the value of reduced journey distance.Whether by walking, cycling, or a shorter car or public transport journey, making efficient use of land is proven to also reduce carbon emissions because our commute journeys are shorter. A shorter journey

So be a YIMBY – ―yes in my back yard‖ – to urban development, because pushing development further and further away to the fringes will only selfishly increase the work that your children will have to do to halt climate change.

They‘re more tolerable too: less time waiting in a queue at traffic lights or a roundabout, less time crammed into a bus, less time cycling uphill in the rain, are factors that improve our working quality of life.

I acknowledge there will be objection to what I‘m suggesting. Some Kiwis will go berserk at the idea that anything other than endless sprawl and gridlocked single-occupant vehicles is the ideally planned community. There‘s a savage, deeply factionalised battle going on in New Zealand, about how we house our growing population, address the current crisis, and protect NZ‘s lands that have ongoing conservation or agricultural value from an immense deluge of housing spending.

Let‘s throw the cat among the pigeons anyway: let‘s take our long-term cues from Illdefons Cerdà, not the Californians, because California‘s current housing crisis is a window fifty years into our future if we don‘t get serious about urban density and transport.

These are solutions with a grounding in both economics and environmentalism. Long- term planning, too, if you care about farming and global food security."