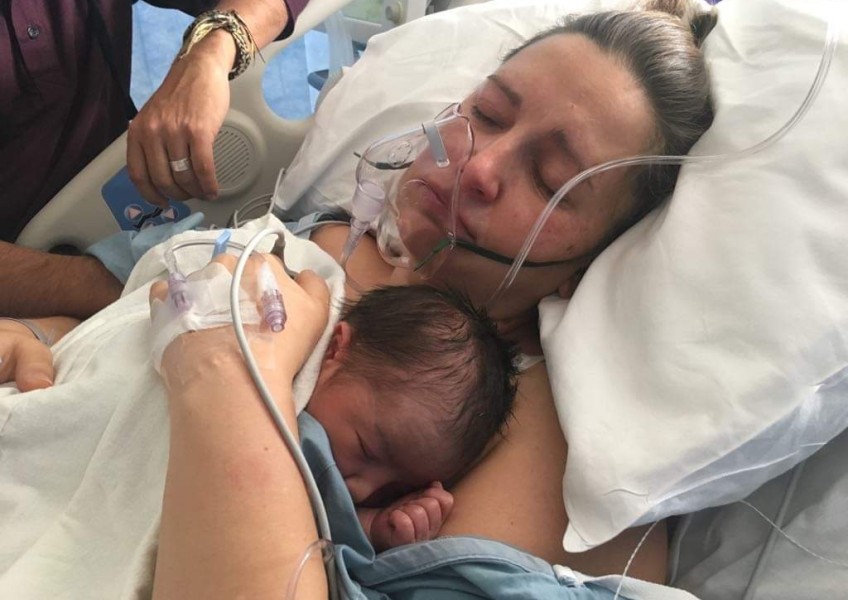 Almost two years ago Queenstown mum Kamile Hood was technically dead at the Lakes District Hospital when she lost a massive amount of blood following the home birth of her son. In this raw and sometimes difficult to read account she describes exactly what happened, so that the state of our Southern Lakes public health services can hopefully be improved. Her survival depended on a rescue helicopter being able to fly during a period of local thunderstorms.

Crux thanks Kamile for having the courage to tell her story.

On September 25th 2017 at 4am I gave birth to the most divine little boy Fénix at home in a birthing pool surrounded by candle light, essential oils, peaceful meditative music and love. With child number three I had achieved my perfect birth!

While I held my baby in my arms floating in the pool, I kissed my husband. Hooray, he was out and he was perfect! You think once you’ve birthed the baby all the hard work is done but no, not in this case. The worst was still to come. I remember asking the midwife how do you know if you're losing too much blood in the water and her answer was, rosé is ok but merlot is not. I started to panic slightly as the water was turning to a merlot red.

I jumped out of the pool and lay on the floor, after injections in my leg, and bubs at my nipple, to try and release the placenta, I remember yelling “No” as the midwives tried everything they could but it felt stuck, something wasn’t right!

After a short while an ambulance was called and before I knew it, covered with a blanket my naked body lay on a stretcher in agonising pain, cold with rain on my face and feeling very faint, I was in and out of consciousness as I remember laughing at the ambulance staff, yelling why did you shut the farm gate, aren’t we in a rush here?

But then I don’t really remember the ride to the hospital.

I remember being in the hospital ward so confused, why was this placenta not coming out?

The very confused professionals that surrounded me seemed to have no idea what they were dealing with. I found out later I was a lucky 1 out of 50,000 women to have a uterine inversion, so the ‘giant placenta’ was actually my uterus prolapsing and exiting my body. By this stage I was losing a lot of blood, too much blood! I felt the urgent, necessary but very brutal actions of panicked staff trying to do anything they could to stop the rapid bleeding!

I remember having moments of clarity, asking questions like ‘’babe did you ring the house and get someone to blow out all the candles as I don’t want the house to burn down as well.’’

I think this practical thinking was me trying to stay grounded as I felt myself slipping into a hazy consciousness. ‘’Babe are you there?’’ I called to my husband, ‘’ Yes honey I’m right here” he replied. I could hear him yet I couldn’t see him - all the bodies around me started to become a white blur. I could hear a lot of beeping, conversations and noises as I stared at the white chequered squares of the hospital roof.  ‘’When the f*** is the helicopter getting here’’ I yelled. I was holding on with every little bit of strength I had left. I was literally holding on for dear life.

I had completely flat-lined. I was technically not alive any more.

Then a breathing tube was thrust down my throat and the medical team managed to put me into an induced coma before I was carried out to the helicopter that had landed next to the Queenstown Lakes District Hospital.

But when I woke up in ICU, 300 kilometres away in Dunedin out of a 2 day coma, the surgeon came in. He had performed an emergency abdominal surgery on me to stitch my uterus back in. He said I’d had a full body blood transfusion (two and half body capacities worth of blood) and I had been two minutes from total, irreversible death. It suddenly all made sense to me that what I had just experienced was a NDE.

So what exactly did I experience at the time?

So I remember staring at the white chequered squares on the hospital ceiling and they very quickly started morphing into a matrix web, almost a tunnel effect into a matrix world, a feeling of getting drawn up into another dimension and at the same time, time was speeding up, like a fast forward feeling. A feeling of a place where time didn’t exist, a morphing of past, present, future all in one and hearing so many conversations, it was like I could hear one hundred conversations in a minute, everything at once, everything was one! Even as I try my best to describe this in writing I just can’t put it into words, it’s more of a feeling that’s stuck with you that is totally indescribable, a spiritual experience! I remember having this realisation that what I had just experienced in that moment was exactly what my dad had experienced all those years ago when I held his hand as he collapsed into a coma and a few years later passed away. But before he collapsed I remember him muttering a whole lot of words, having these realisations and making all these connections in the universe. And all these years later I feel like I felt what he felt in that moment. I felt so connected to my beloved dad.

Man, do I feel lucky to be alive, with all the odds against me!

Helicopters trying to land during a thunder storm. Waking with not a drop of my own blood left in my body, my whole uterus externally outside of my body leading to emergency surgery. Suffering an asystolic arrest - the most serious form of cardiac arrest that is usually not survivable.

Yes,  I am very, very lucky to be given a second chance! I definitely had some guardian angels looking out for me that’s for sure!

It was not my time! I have too much to live for. I was determined not to leave my beautiful children behind and it will be an amazing story to share with them one day.

Copyright Crux and Kamile Hood. The story and images may not be re-printed or posted without the express permission of Crux Publishing Ltd.