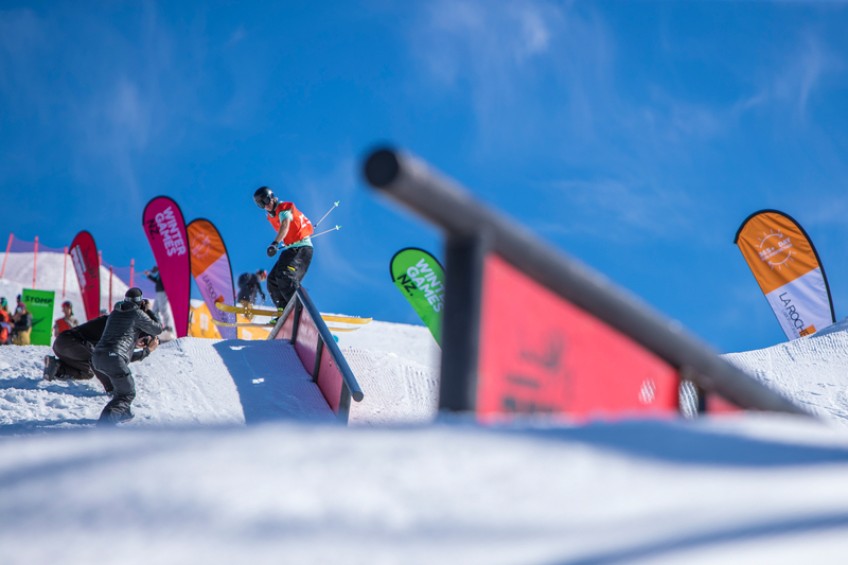 From the Winter Games:

The 2022 Winter Games NZ wrapped up in style today with the Cardrona STOMP Park Jam presented by La Roche-Posay. Vibes were high as the field of world-class skiers and snowboarders dropped into the purpose-built rail garden looking to showcase their most stylish and creative tricks.

The jam format meant that competitors had two hours to take laps through the rail garden hitting their choice of rail features with a rolling ranking system determining the top three placings in each category for male and female, skiers and snowboarders.

The athletes enjoyed the relaxed feel of the event, treating it much like a fun session hanging out with friends rather than a high-pressure competition.

“It takes away the competition pressure, you have less nerves and can just go with the flow a bit more,” explained Kiwi competitor Luca Harrington.

Max Moffat (CAN), who took out first place in the men’s freeski Big Air yesterday, was back on top form today, consistently stomping his tricks and impressing the judges with his variety.

“I definitely did not expect the weekend to go how it did,” said a delighted Moffat. “I’ve had such a blast. I grew up doing rail jams, they’re one of my favourite things ever, it's such a blast to get into one today. I was surprised to win again, it’s such an honour. I love being here in New Zealand, it feels like a second home, it brings out the best in me.”

Ferdinand Dahl (NOR) was a close second, landing some of the gnarliest tricks of the day, but taking a few runs to nail down the execution. Kiwi Finn Bilous finished in third place, with a good variety of tricks and some creative highlights including his rodeo 720 tail tap.

While not a podium finisher, Jackson Wells (NZL) was the competitor who arguably made the most creative use of the course, jumping clean over the judging tent not once but twice, the second time with a backflip.

The women’s ski category saw an interesting battle for the top spot between Kelly Sildaru (EST) and Olivia Asselin (CAN). 10-time X Games medallist Sildaru, who has spent several seasons training at Cardrona from a young age, eventually edged ahead, able to land more clean runs than the Canadian and with a greater variety of tricks in her repertoire. Anni Karava (FIN) finished in third place.

“It’s pretty much my first week on snow after four months,” said Sildaru. “I’ve really enjoyed it. I just came here to have fun and enjoy skiing and that’s what I did.”

Valentino Guseli (AUS) also backed up his win in the men’s snowboard Big Air yesterday, taking out first place in the Park Jam today. Displaying all round riding prowess, he made full use of the course, throwing down technical tricks on the quarter pipe feature as well as showcasing technical rail work.

“After yesterday I didn’t want to be complacent,” said Guseli. “I wanted to put a show on for the crowd, I just wanted to do my best snowboarding and I was happy to get pretty close to that. Everyone had their own little twist on different features, it was cool to see. To get two wins is awesome.”

Dane Menzies (NZL) looked unstoppable out on the course, making 12 laps of the park, the most of any competitor. The judges awarded him second place for consistently putting down good clean runs incorporating some standout tricks and some big transfers.

It was a close finish between local riders Cam Melville Ives and Rocco Jamieson, both displaying strong riding throughout the event and individual strengths. Both scored highly for their rail tricks and Jamieson had some strong stall tricks on the wall ride feature, but Melville-Ives just topped that by going bigger on the transfer as well as on the quarter pipe with a frontside double 1080.

Two-time World Champion in slopestyle, 26-year-old Laurie Blouin (CAN) was a clear winner in the women’s snowboard, showing her class and experience with a full bag of technical rail tricks.

“It was a super fun day and the level was really good today,” she said. “It was nice to have fun and it’s good to be back here in New Zealand.”

15-year-old NZ rider Lucia Georgalli, one of the youngest competitors of the day, was delighted to finish in second place, with Mari Fukada (JPN) in third.