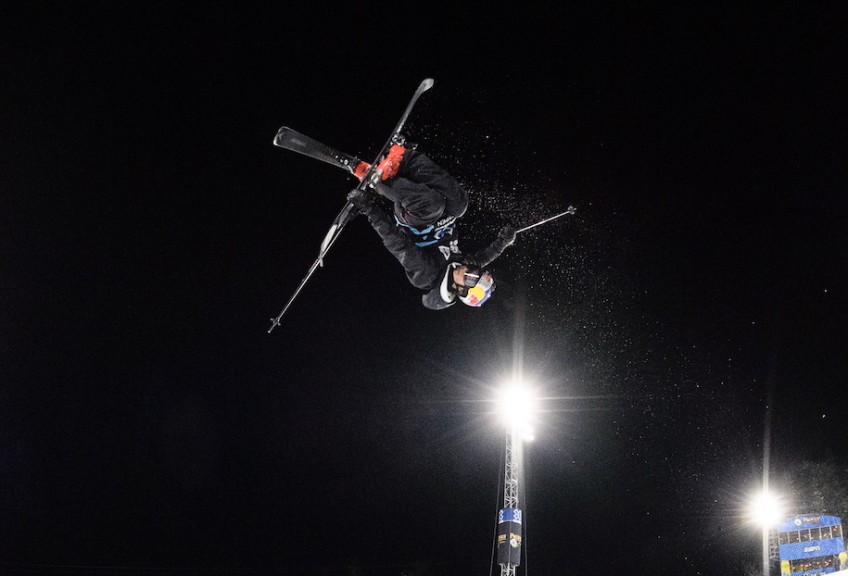 Porteous made history tonight when he became the first freeskier to ever land both his right double 1620 and the combination of a right double 1620 into a left double 1620 in a halfpipe competition. “It has been a lifelong dream for me, so it is pretty surreal right now and pretty out of this world”

“That run has been in the works for the past year and half, I dreamt that run and have worked really hard at it and gave it my best shot to make it become a realty this NZ winter with the help of Cardrona Alpine Resort and High Performance Sport New Zealand. To be able to land it and win the gold medal is pretty unbelievable.”

When asked about how Porteous was able to perform such a technical, never done before run he explained that he “listened to the right tunes and thought about all the time I have put in [preparing for this run]. I was hyper focussed and knew what I had to do and didn’t let anything get in the way.”

Porteous was joined on the podium by Aaron Blunck with the silver medal and Birk Irving with the bronze medal, both from the USA.

Porteous’ coach Tommy Pyatt said “obviously with a first place result we are both so happy, and it is great to tick that box [X Games gold medal]."

Pyatt went on to explain “there were two main factors that resulted in tonight’s success, the fact that Nico had almost landed the complete winning run numerous times in training over the past two weeks and that without the crowd [due to Covid-19] Nico felt there was less pressure on him, which allowed him to ski at his best.”

It's the fourth X Games medal of the 19-year-old's career, and comes just three weeks after she won Big Air gold at the World Cup event in Kreischberg, Austria.

A bronze medallist at the 2018 Winter Olympics, Sadowski-Synnott said the result was pleasing, especially as she'd not been at her best in practice.

"In the first two runs I was struggling with speed and not pulling it all together. On the third run I pulled it back to land a run and then put it all together on the final run."

Jamie Anderson of the US took the gold medal with her effortless style and solid landings, and Canadian Laurie Blouin rounded out the podium with the bronze medal.

"At X Games there is definitely the feeling in the air that this is the biggest competition of the season and this is where you want to do your best," Sadowski-Synnott said.

"After coming just behind Jamie in LAAX I was giving it everything I had to come on top. I am still stoked with second place though."

Sadowski-Synnott has also been invited to compete in the X Games Snowboard Big Air event scheduled for Sunday morning (NZT).

"I am feeling good about the big air, the jump is nice, after today there will be some athletes who missed out [on the podium] who will be going for it tomorrow. It will be a really good show."