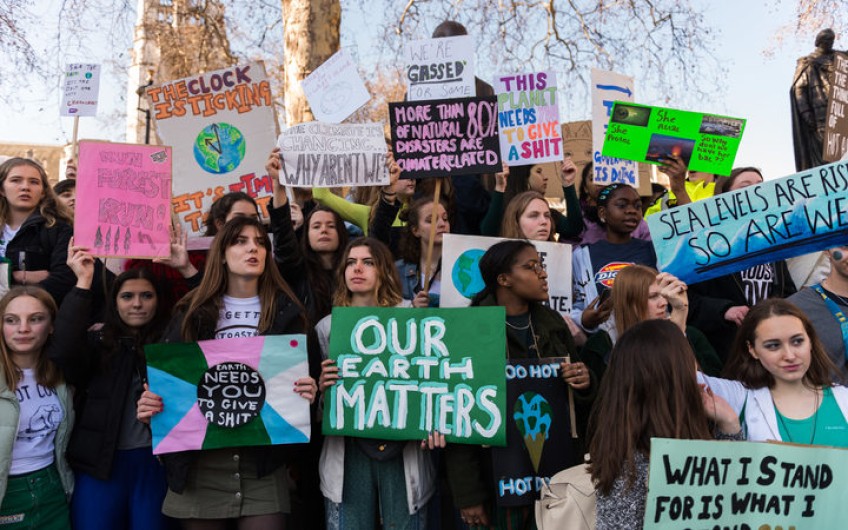 It has been confirmed that high school students in Queenstown will go on strike on March 15 to support the need for action on climate change. The QLDC has also approved a student march through the CBD that starts at the rotunda in Queenstown Gardens at 2.45pm.

Here Esther Whitehead from Sustainable Queenstown details the background to the student strike and march.

That slow moving beast Local Government, is desperately trying to haul itself over the increasingly high hurdles coming at it, such as rapid growth, climate change, and the looming over-tourism in our Lakes District, but will slow and steady win the race?

Local councils have statutory responsibilities to adapt to, and help the community to adapt to the effects of climate change. The potential impacts include increased frequency of adverse events, such as droughts and floods, cyclones, diminishing water security, endangered coastal communities and damaged natural ecosystems which are all serious enough that closing our eyes to the effects of climate change would represent poor stewardship on our part.

Students from Wakatipu High School can’t close their eyes though.

She made the choice to strike from school and spend her days instead protesting climate change outside the Swedish Parliament. Her reasons for doing it have resonated with hundreds of thousands of children and young people across the world.

“Some say I should be in school. But why should any young person be made to study for a future when no one is doing enough to save that future? What is the point of learning facts when the most important facts given by the finest scientists are ignored by our politicians?” - Greta Thunberg

Now, this global movement has arrived in Queensttown, New Zealand. At 2.45pm on March 15, Queenstown school students will be joining a global youth movement for Climate Action. QLDC has not only authorised this but given its blessing for the student march for Climate Action. You can find out more details on Sustainable Queenstown Facebook Page

Local government decisions affect the natural environment and neighbourhoods we live, work and play in, and they impact on many aspects of our well being. Councils are accountable to their communities, rather than to central government and even more so with The Local Government (Community Well-being) Amendment Bill brought in last year.  This gives local authorities the scope to develop the services their communities want in consultation with the people who use them. Essentially local government plays a really important role in supporting quality-of-life outcomes but as a community we must engage positively, if we want to see successful outcomes.

In NZ, The original declaration signed by mayors for Local Government Leaders’ Climate Change was signed before Jim Boult became Mayor in October 2016. The former Council had agreed to support the declaration but for some reason LGNZ omitted Mayor van Uden’s signature. This has now been rectified and Jim Boult’s signature has been added retrospectively.

The signed declaration asked that the New Zealand Government make it a priority to develop and implement an ambitious transition plan for a low carbon and resilient New Zealand.

“The Zero Carbon Act framework is uniquely suited to cross-party agreement. It sets out legally-mandated outcomes and process, without prescribing specific policies. It combines long-term clarity on policy direction with flexibility in its delivery”  It sounds like a dream but in reality its lack of specific policies may see its uptake being too slow and too hard.  This is a forward-looking piece of legislation, which serves us well in the long-term but makes the short-term far more challenging! A sign of our times!

Whether you believe in anthropogenic climate change or not, the evidence of rapid change is right here, right now, and the urgent need for a planned pathway is agreed by the majority. To actually agree on what specifically that pathway is, is overwhelmingly complex but still doable, when we look to overseas legislations and pathways.

So how do our local authorities cope, how do they step up to the challenge?

The reality is that they must seek the best expertise they can to develop an achievable and meaningful climate strategy, taking direction from the Zero Carbon Bill; rally in stakeholders who can contribute pragmatically and put a climate strategy out for public consultation all before the next election cycle. The risk of it being compromised is too great so it’s about making a start!

“We [the mayors who signed the Local Government Leaders’ Climate Change Declaration] stress the benefits of early action to moderate the costs of adaptation to our communities. We are all too aware of challenges we face shoring up infrastructure and managing insurance costs. These are serious financial considerations for councils and their communities.”

These costs to community in the short-term led the West Coast Regional Council to not support the Zero Carbon Bill possibly due to the fact that two councillors are directly involved in coal-mining. It’s clear in their submission that they simply can’t even imagine the transition to a carbon-free future, let alone plan for it, when so many of their primary industries rely directly on it. I’m sure that sentiment is understood by many but it seems the West Coast Regional Council missed last year’s rather important memo from the UN Intergovernmental Panel on Climate Change report – detailing the difference between meeting a 1.5C rise above pre-industrial levels compared with 2C – which gave the most alarming picture yet of the impact of climate change. How much might it cost to create the pathway?

It’s a big cost (ok, I have no idea) but the IPCC report makes it clear that effects of runaway climate change will damage our economy much more than taking steps to reduce emissions. Luckily for us, QLDC is in support of the Carbon Zero Bill, and is taking steps to address our localised opportunities. Mayor Jim Boult has also given the thumbs up for school students to march through the Queenstown CBD on March 15th following Greta Thunberg’s protests outside the Swedish parliament which have sparked an international youth movement.

In short, Climate Change goes far beyond the political realm. With few conceptual tools, and institutional tools to handle the changes required,  it’s really about strong leadership and partnerships.  Leadership by individuals, leadership by businesses, leadership by local governance, and central government; each partnering wherever possible to make this transition achievable. It’s a shared responsibility.  There’s no more time for hui, it’s all about the do-ey! What can you do?

Get informed: A whole heap of things you can do from your couch or at home: https://www.un.org/sustainabledevelopment/takeaction/

If you and your children want to take part in the local Climate Action March, it has been approved by QLDC on March 15th at 2.45pm, please contact your school to find out more or go to Sustainable Queenstown Facebook Page to view the event and join students there.

QLDC is supportive of the local march for Climate Action by students in the Wakatipu.

Look out for QLDC’s consultation process on Climate Strategy later in the year, and have your say about it.

Come along to Catalysts Trust’s Event on Social and Climate Change, Conflicts in Sustainable Tourism on March 8th.