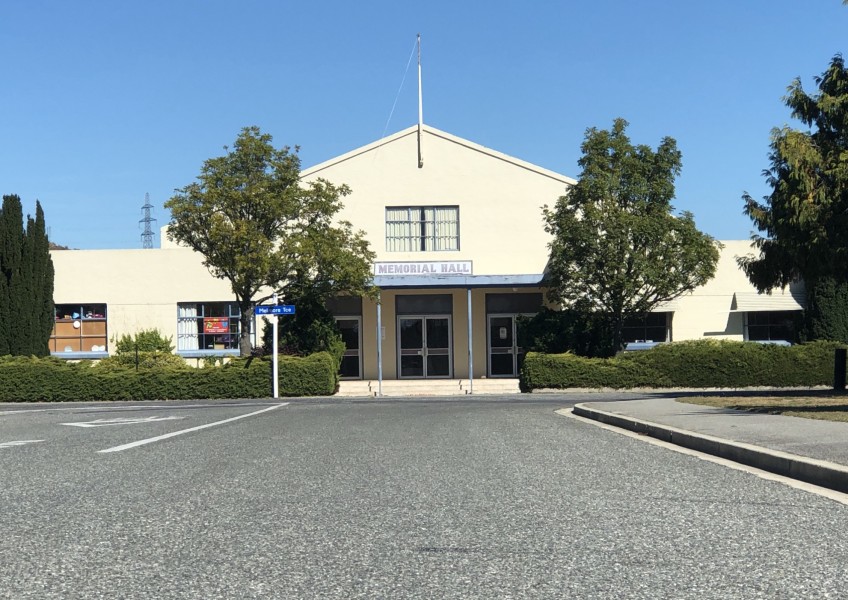 To people living outside Cromwell, the seemingly endless debate over a new memorial hall makes no sense at all. The answer is obvious and decades overdue. So is it political game playing or bureaucratic incompetence that is the problem? Crux Cromwell reporter Kim Bowden takes a detailed look and talks to both sides - but her findings do not show the Central Otago District Council in a good light.

When Cromwell resident Jocelyn Johnstone met with members of the Clutha Community Hub Charitable Trust in Balclutha a few years back, she was on a high.

Here was a group of dedicated volunteers given the greenlight by Clutha District Mayor Bryan Cadogan and his Council to drive the development and build of a new community centre in Balclutha.

Their project felt familiar: The hub was to be located on the town’s existing prominent hall site, a beaut spot with views to the Clutha/Mata-au River.

Balclutha has a 4000-strong population, a wee bit smaller than Cromwell further upstream but still comparable.

Design concepts for the hub include a 400-seat auditorium, an atrium art gallery, reconfigurable meeting and workspaces, and tenanted retail and leased spaces including an i-Site, Plunket rooms, a Council Service Centre and a mini-theatre.

Clutha Community Hub Trust chair Dale Anderson has said previously the hub would honour its foundations as a War Memorial Hall and pay homage to those involved in its original creation, while fulfilling the needs of a modern community and inspiring the next generations.

Last year, the project received $7 million from the Government’s ‘shovel-ready’ fund, effectively enabling the community to push go on its build. 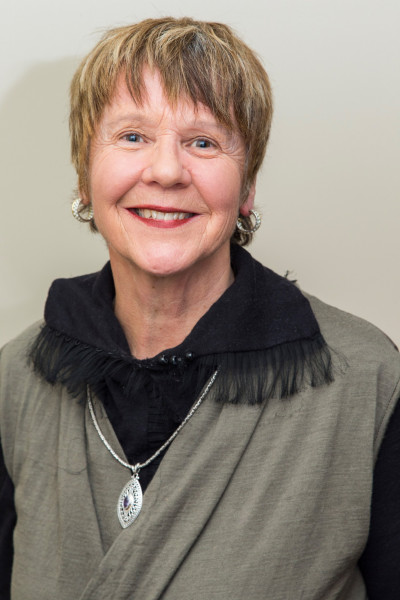 Ms Johnstone travelled to Balclutha with others on a fact-finding mission for the Cromwell Cultural Centre Trust – a similar group of dedicated volunteers with a very similar vision for their town.

But that’s where the similarities end.

And Ms Johnstone is no longer on a high.

“This most incredible group of people that I’ve ever worked with came together, they worked efficiently and amazingly well.

“With the communication that went out there was this widespread swell of support to get this happening.

While in Balclutha the Council actively sought out talented and willing residents to drive the hub project, momentum in Cromwell to have a local trust develop and build a future-proof community facility to replace the town’s dated memorial hall has been stymied by the Central Otago District Council, Ms Johnstone says.

Two weeks ago, Council opened a month’s worth of consultation on its draft Long-Term Plan, a document that will steer Council and the work it undertakes over the coming years.

Included in the Ka Aka Whakamua - Framing our Future consultation document, which outlines key issues for community feedback, are options for a new Arts, Culture and Heritage Precinct.

The proposed project would be built on the site of the existing memorial hall, and comes with a $31.5 million price tag, of which a 2000-square-metre town hall or events centre makes up $16 million.

The remaining $14.5 million is taken up by a museum, and landscaping, demolition and project management costs.

The consultation document also outlines some cost-saving alternatives – a smaller footprint for the town hall or the option to stick with and refurbish the existing memorial hall. 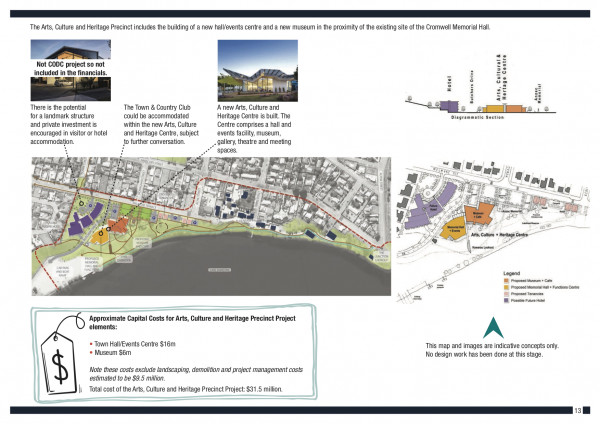 Page 13 of the CODC's consultation document on its draft Long-Term Plan, outlining a new Arts, Culture and Heritage Precinct proposed to be built on the site of Cromwell's existing memorial hall.

For Cromwell winemaker James Dicey, a driving force behind the Cromwell Cultural Centre Trust alongside Ms Johnstone, the options for the proposed new precinct included in the consultation document are underwhelming.

The new facility will only provide for community activities currently catered for, plus events and medium scale conferences – that’s Council’s own words – he says.

“The options that have been presented don’t meet the growing or future needs of the community.

“Even their most ambitious plan that’s been reflected in here (the consultation document) doesn’t reflect the sentiment that has been part of the consultation we’ve done, that we’ve actually provided to the council, and they’ve ignored.

Despite informal presentations to the Cromwell Community Board, Mr Dicey says the Trust’s attempts to secure a spot on an agenda of a board meeting were unsuccessful, and that was confusing and frustrating.

Members of the Trust, including Mr Dicey, did attend a series of meetings with Council chief executive Sanchia Jacobs and other senior management staff.

“We looked at this as an opportunity to have a continuing dialogue and to have the opportunity to present some of the results of the work we had done.”

Handed over were concept plans and numbers, a business case – hundreds of pages of documents resulting from hundreds of hours work by talented and skilled volunteers from the Cromwell community.

Earlier, Council told Crux information from the Trust was used in the financial modelling of the proposed new events centre outlined in the Long-Term Plan documents.

But Mr Dicey finds that hard to reconcile.

“If you do a back of a fag packet calculation – take 2000 square metres and you add $16 million that’s $8000 a square metre, that reconciles to none of the figures we’ve done.”

Delving deeper into the consultation document and the draft Long-Term Plan underlining it, Mr Dicey says he’s none the wiser.

“I don’t understand how what we’ve been asked to consult on reconciles back to the Long-Term Plan.

“None of the information that is in that Long-Term Plan is included in any way shape or form in the consultation document. 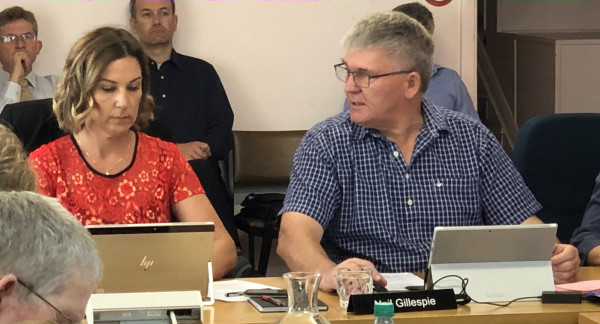 Prior to the release of the draft Long-Term Plan, Mr Dicey says relations between members of the Trust and Council staff deteriorated to a point where in a meeting Council chief executive Sanchia Jacobs referred to them as “bullies”.

It was distressing to hear, Mr Dicey says.

“Because those are some fairly strong and emotive words to be using, and it really raised some alarm bells and red flags way high up the community totem pole as to the attitude that some very senior members of the management team within the Central Otago District Council had towards a community-generated piece of momentum.”

In response to questions from Crux, Council chief executive Sanchia Jacobs has defended her choice of words.

She made the comment to a member of the Trust, saying their behaviour could be seen as “bullyish”, she says.

“This was made in the context of a discussion that Council can’t just respond to the desires of one community group, no matter how insistent they are, and is legally required to consult with the whole community on a project of such significance – this was always going to be through the Long-Term Plan process.”

Council planning boss Louise van der Voort has told Crux that although the scenarios costed in the Long-Term Plan consultation document make no mention of whether a trust could drive an events centre project, it’s not off the table.

The Cromwell Masterplan options discussed in the Long-Term Plan consultation document relate to the scale of the build, the timing of the build, and the impact it will have on rates.

Once the Long-Term Plan is adopted then decisions will be made about how the project will be delivered, Ms van der Voort says.

“It is really important at this stage that we hear from the community – that they look at the Long-Term Plan consultation document options and let us know their views.

“We want to make sure that the concept scope for this project matches community need.” 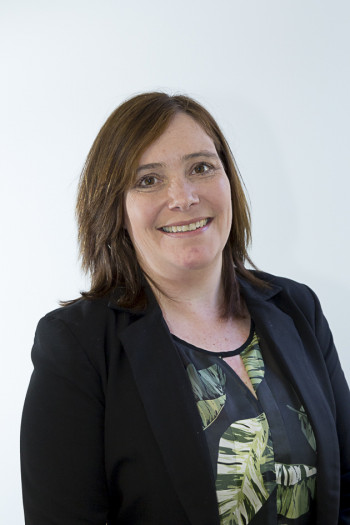 Cromwell Community Board chair Anna Harrison says the Board has been clear that big-ticket items on the Cromwell community’s wish list, identified in the Cromwell Masterplan, needed to be included in the Long-Term Plan.

“The Cromwell Memorial Hall is of course one of those projects and we are hoping that we will have plenty of submissions around the course of action that our community wishes us to take with this project.”

She agrees with Ms van der Voort the possibility of working alongside a trust to bring the arts, culture and heritage precinct project to fruition has not been discounted.

But, the risks and opportunities that a trust-driven project, a project delivered in partnership with a trust, and a community board-driven project may bring need to be considered, she says.

“This includes learning from previous examples both those that were successful and those that needed the local body to step in when it stopped being successful - our most notable local example being Central Stories in Alexandra.

“Whatever the model for building and management of the building, we know that a significant proportion of funding will come from the Cromwell Community Board and we have a responsibility to make sure we get it right.”

Cromwell’s elected councillors and community board members have all been invited by Crux to comment on the work of the Cromwell Cultural Centre Trust, its relationship with Council and the Community Board, and the potential role it may play in driving an events centre project. 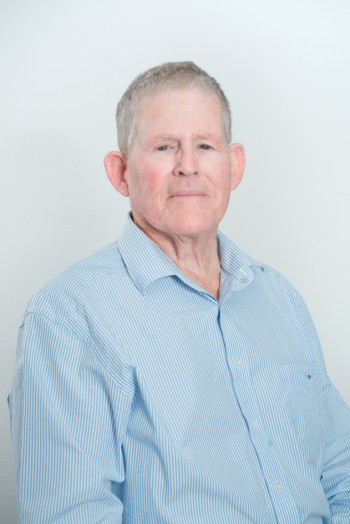 Cromwell Community Board member Robin Dicey thinks a trust-driven project to build a Cromwell events centre would save time and money.

Community Board member Robin Dicey is the only elected voice willing to stick his neck out, offering his own personal take on the situation, separating his views from those of the community board.

“It is my belief that by far the best way froward for a hall to be built would be to delegate the project to a trust.”

The advantage is a trust can be funded through multiple channels: rates, Cromwell’s considerable reserves, and external sources, he says.

“A community-led project has more appeal than a local government body soliciting funding.”

A trust-driven build may also prove cheaper and speedier, he says.

“The Cromwell Cultural Centre Trust already has a highly skilled set of vital people willing to give their time at no cost to the community. These include architectural, engineering, project management and accounting volunteers.

“These would save not only money but also, vitally, time.”

Community board or council-run projects risk moving at “glacial” speed, with “inevitable bureaucratic holdups in the form of protracted decision-making”, which a trust can effectively sidestep, he says.

All elected members who chose to reply to Crux did stress one point in common: Cromwellians need to have their say.

Councillor Cheryl Laws says submissions can go beyond the scope of the Long-Term Plan consultation document.

So, although the option of a trust-led project isn’t mentioned, it’s still up for discussion.

“They can make submissions on any matter that is not in the plan so long as it involves council operations, activities or rating decisions. The future of the Cromwell Memorial Hall would fit all three of these criteria.”

Ms Johnstone is working hard to muster momentum within the community for what she says feels like just more talk.

“We’ve been asked this in every community plan for the last 20 years. What is the problem?

“Consultation is great, we’ve done it, and people are just saying, so why aren’t we getting it? My voice is powerless because I speak and nobody hears, so they stop talking.”

Main Image (Kim Bowden): The Cromwell Memorial Hall is unsafe and out-dated. What's to become of it or replace it is up for discussion as the Central Otago District Council seeks community input to finalise its Long-Term Plan.