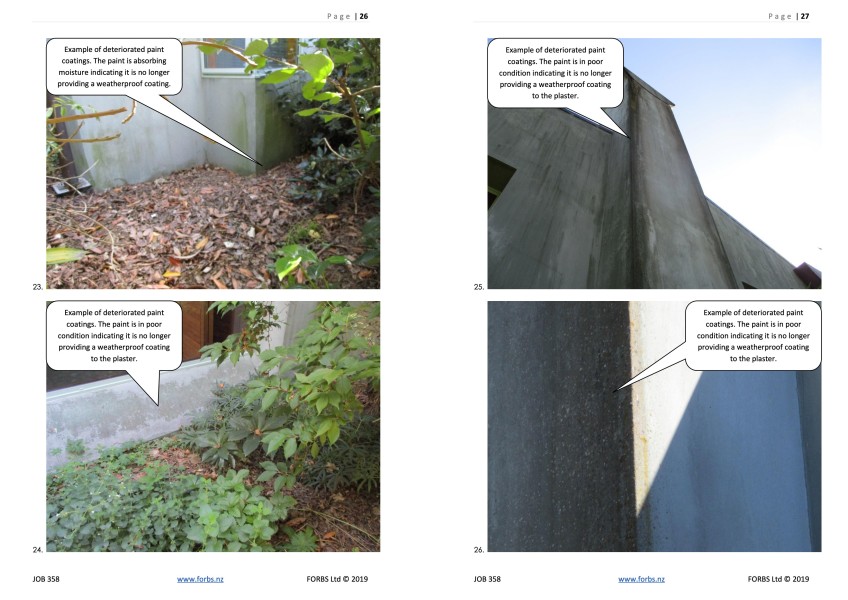 The Walker residence on Ladies Mile was flagged to the council as being a leaky building long before more than $200,000 was spent on starting to convert it into a community centre.

Documents received by Crux suggest the Queenstown Lakes District Council paid top dollar for the home, even after a pre-purchase report said water had got into the structure as a result of a "number of deficiencies".

A pre-purchase building inspection of the home on Ladies Mile alerted the council to weathertightness issues with the building as early as the start of 2019.

In October this year, in response to ongoing questions from Crux regarding a lack of construction at the site, the council revealed plans to convert the home into a community hub had halted after “toxic mould” was discovered behind the building’s cladding, windows and interior framing panels.

In a statement at the time, the council said the issues were “previously unknown”.

However, documents received by Crux under official information requests show the council had been made aware of some issues with the weathertightness of the building even before it bought it.

In March 2019, an Arrowtown company offering pre-purchase building assessments, Forbs Ltd, provided the council with a comprehensive report on the home at 516 Ladies Mile.

Flagged in the very first paragraph of that report: “a number of deficiencies” meant water was getting into the building where it shouldn’t have been.

Those who undertook the inspection said they saw evidence of “water ingress”, including water damage and elevated moisture readings.

“It is recommended that further invasive investigation be carried out,” the report says.

“This further invasive investigation should determine the cause of the identified water ingress, the extent of any deterioration as a result and to determine appropriate remediation to repair the issues.” 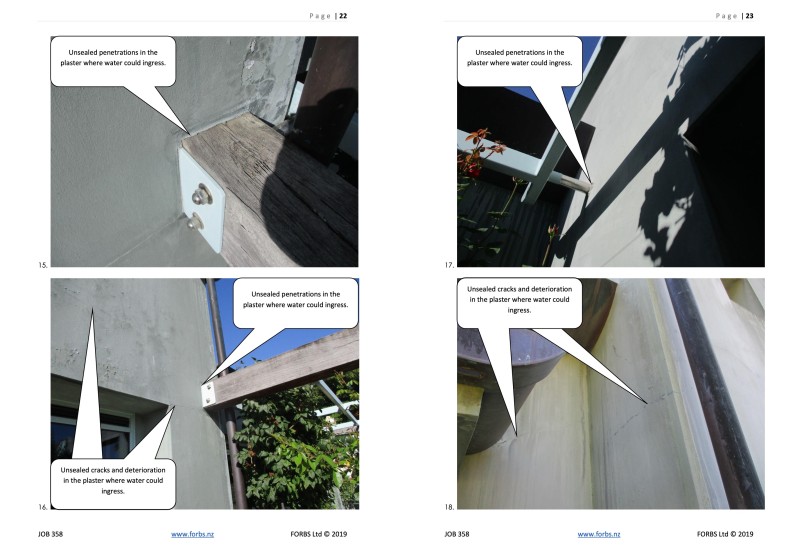 A page of photos of the Ladies Mile residence included in Forbs comprehensive report on the building, which flags 'water ingress' concerns to the council prior to its purchase of the property.

The council followed through with the purchase, which cost ratepayers $13.78 million, saying “the long-term strategic value of the land” was its prime motivator for doing so.

Then, despite the red flags in the pre-inspection report, the council pushed on with an idea to “reimagine” the home as a community centre, spending hundreds of thousands of ratepayer dollars in the process.

A concept plan was developed, resource consent sought and granted, and millions of dollars budgeted for it.

In February this year, councillors approved a $3.6 million budget for the community hub conversion of the home and, the following month, council staff hosted an open day at the site, inviting community members for a walk-through of the building and to feed into design ideas.

Up until the “toxic mould” discovery, the council had spent $201,554.88 on the community hub conversion, according to information received by Crux under official information requests.

Crux first started asking questions about the possibility of delays at the site before the October elections, and staff at the council repeatedly delayed providing responses to those questions.

After more than a week, and the election of a new mayor and councillors, the council issued a statement to all media regarding the “previously unknown” issue of the “toxic mould”.

According to information received by Crux under LGOIMA requests, a further report by Forbes in March of this year, before the community open day, identified the presence of “Stachybotrys” – a greenish-black mould that grows on fiberboard and GIB – in the building, seven months before the media announcement regarding the problem.

Councillors were "updated" on the project on September 13.

Big bucks for a dud property?

So, why did the QLDC pay $13.78 million (exclusive of GST) for a property with such obvious problems from the get-go?

They’ve told us it was a “strategic” investment but, regardless, did they pay too much for it?

Also under LGOIMA requests, Crux has received a valuation assessment carried out by Colliers International in February 2019 for the council.

These property experts gave the address a value of $12.25 million, including chattels and exclusive of GST – that’s $1.53 million less than what the council handed over for it a few months later.

But, in its report Colliers International cautions the valuation had been prepared with an assumption the buildings were “watertight”, free of any “defects” which could result in them having “gradual decay”.

The subsequent building inspection, supplied to the council at approximately the same time, clearly evidenced otherwise.

The valuation goes into plenty of detail about the value of the land if it were to be carved up into smaller plots for residential development, assuming future changes to district plan zones allows for such development along Ladies Mile.

That's where the property's worth really stems from, the report indicates. 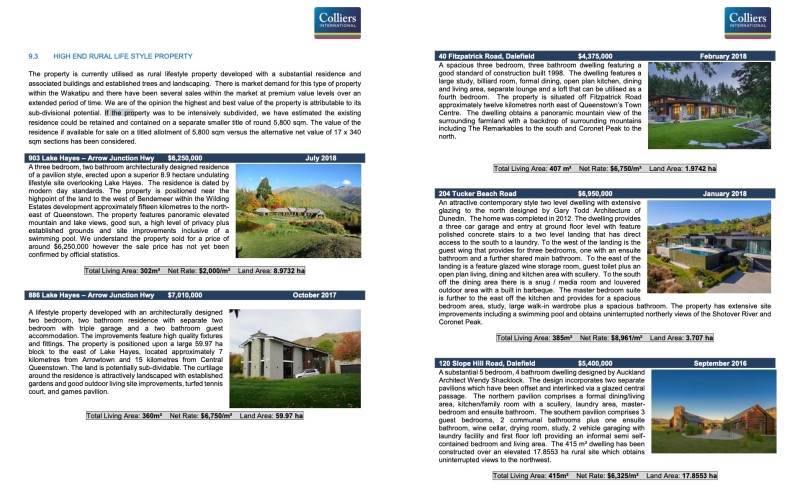 The former Walker Residence on Ladies Mile, if lopped off with a chunk of land, was comparable in value to a number of properties sold in the area and analysed by Colliers International for the QLDC.

But, it also takes a stab at estimating the value of the 427-square metre, four bedroom dwelling, with additional music room and office, and three bathrooms, if hypothetically subdivided off with 5,800 square metres of land, by looking at comparable properties in the area that sold between September 2016 and July 2018 for between $4.3 million and $7.01 million.

However, the council has told Crux it never considered these broken down values to be of importance during its decision making. 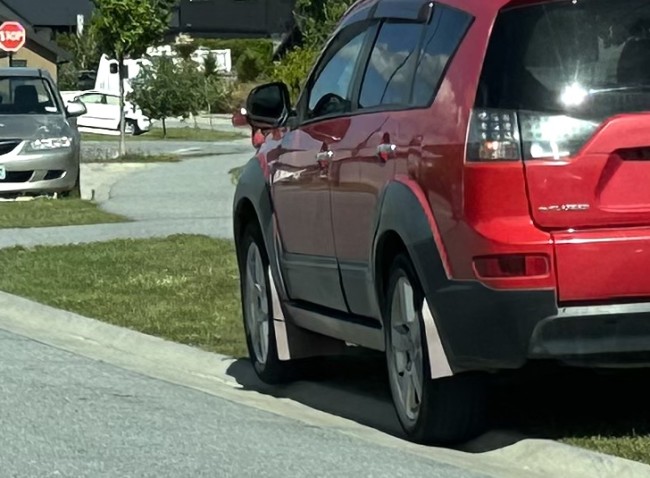 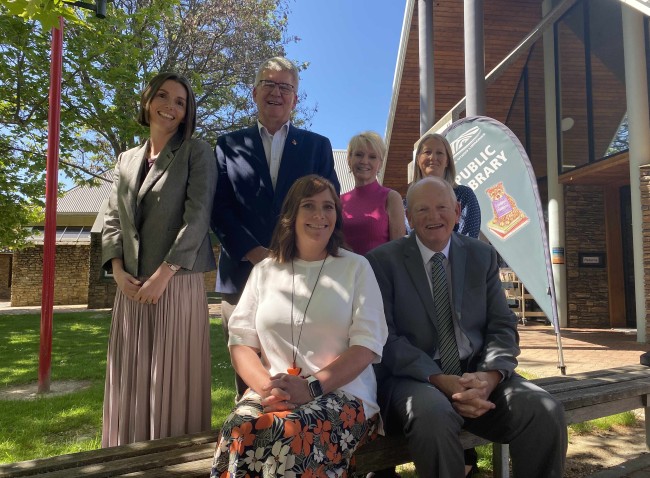