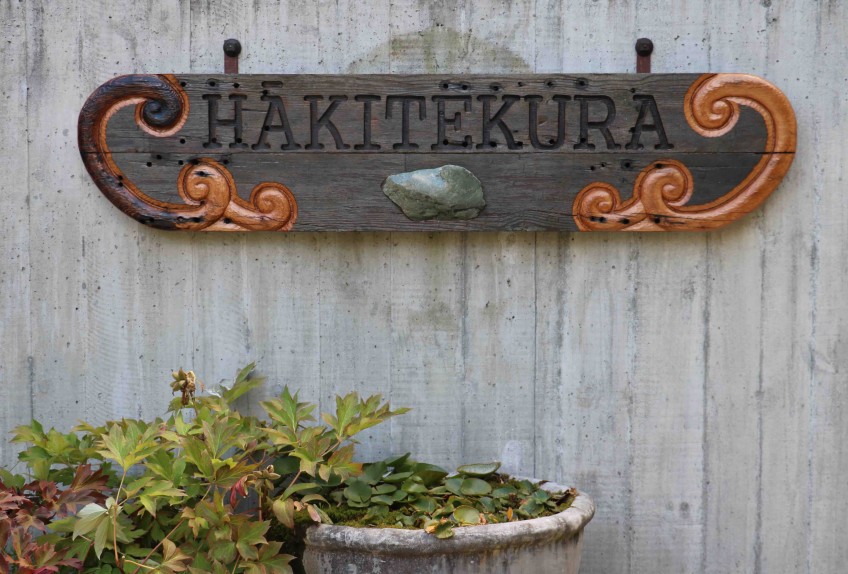 The following media release has been published by Otago University.

"The University’s newest property based in Central Otago will have a name honoring a local tipuna whose life was filled with courage and bravery.

The stunning four-hectare Woolshed Bay property was donated by the Jardine family to the University of Otago’s Foundation Trust in 2016.

The property will now be known as Hākitekura, honoring the daughter of prominent Kāti Mamoe chief Tuwiriroa. The name was gifted to the Jardines by Ngāi Tahu.

Dick and Jillian Jardine at the Woolshed Bay property gifted to Otago University.

The announcement was made at a special ceremony this morning, where a carving by artist Riki Ngamoki was revealed.

Ōtākou upoko Edward Ellison says gifting the name of a prominent tipuna was not a decision they made lightly.

“For us, Hākitekura is not simply a story or a tipuna. She has continued on her legacy and there are generations who still have distinct ties to her, so the name itself is a highly valued taonga,” Edward Ellison says.

“However in gifting this name, we believe this property will carry on her legacy and a name that can be seen right throughout the area.”

Hakitekura grew up in Tahuna, now known as Queenstown. One day, she vowed to become the first to swim 3 kilometres across Lake Wakatipu after climbing Ben Lomond, a place that would eventually be known as Taumata-a-Hakitekura (The place where Hākitekura sat).

After plenty of training, she arrived at Refuge Point and lit a fire to warm herself, charring the nearby rocks which remain black to this day. The area is now known as Te Ahi a Hakitekura, the fire of Hākitekura.

University of Otago Vice Chancellor Harlene Hayne says the name of the property perfectly embodies the area and the people who have made the gift to the University.

“Hākitekura was brave and bold. She was strong in both body and spirit. She made her own rules and she took risks. These same qualities describe Dick and Jillian Jardine,” Professor Hayne says.

“We are delighted that the Jardines have chosen the name Hākitekura and we are honoured that mana whenua has granted their wish.

“The University of Otago is extremely proud of our partnership with Ngai Tahu and this name is another manifestation of that very important relationship.”

The Kāti Mamoe tipuna has a legacy that can be seen throughout Central Otago. The Cecil and Walter Peaks that helped her navigate towards Refuge Point are referred to as Ka Kamu o Hakitekura. The Kawarau Peninsula is known as Te Unuku o Hakitekura. Dick Jardine says the family is excited about the legacy of the Woolshed Bay property.

“The Hākitekura story is something the family has been interested in for decades, and has helped us feel connected to the land the property sits on,” says Mr Jardine.

“We are absolutely delighted that Ngāi Tahu has agreed to gift us the name of this wonderful tipuna.”

Queenstown architectural firm Kerr Ritchie was selected to prepare a concept plan for the site – which includes respecting the existing ambiance while converting the current buildings and developing self-contained accommodation units for visiting academics. Kerr Ritchie’s approach to the concept plan appealed to both the University and the Jardines, who are being consulted on all plans for the site.

The University has also set up a project steering committee to govern the process. Development of the concept design is continuing, and Professor Nicholson says the Business Case for the project should be completed by April and will guide the future.

When Remarkables Station owners Jillian and Dick Jardine gifted their Woolshed Bay property near Queenstown to the University of Otago in late 2016 to be used as a research retreat, Vice-chancellor Professor Harlene Hayne described it as "probably one of the most significant gifts any university in New Zealand has received".

“Leading researchers could come from all over the world to spend a week or two together to debate, discuss and present data to solve the world’s big problems. It will give them access to an extremely valuable, but intangible, commodity – time."

The four hectares on the edge of Lake Wakatipu – gifted to the University of Otago’s Foundation Trust – includes an historic woolshed transformed into an extraordinary homestead and shearers’ quarters crafted into high country farm house-style accommodation.

With 180-degree lake and mountain views from the Remarkables to Cecil Peak and beyond, the property also includes landscaping created to attract native birds, a productive olive grove, miniature vineyard and a potager, in a microclimate that allows even cold-sensitive plants such as feijoas, lemons and limes to grow.

Dick and Jillian Jardine took over Remarkables Station 32 years ago, living in the homestead on the eastern side of the station until the 1990s when they moved to Woolshed Bay. This was once a part of an extensive merino sheep run farmed by William Rees, an early European settler, Wakatipu explorer and surveyor who brought large-scale pastoralism to the area in the early 1860s and founded Queenstown. He used the woolshed that has become the Woolshed Bay homestead.

The Jardines say: "The Wakatipu has been very good to our family for several generations and this gift to the University of Otago is our way of acknowledging that.

“This gift is our way of repaying that, and ensuring this special place lives on in a rewarding and visionary way.”

The Jardines wanted the Woolshed Bay story to carry on and grow to its full potential.

They have long admired the University’s world-class research, particularly in medical fields, and wanted to help Otago produce research that benefits our country and the world – so the idea of using Woolshed Bay as a research retreat was born."