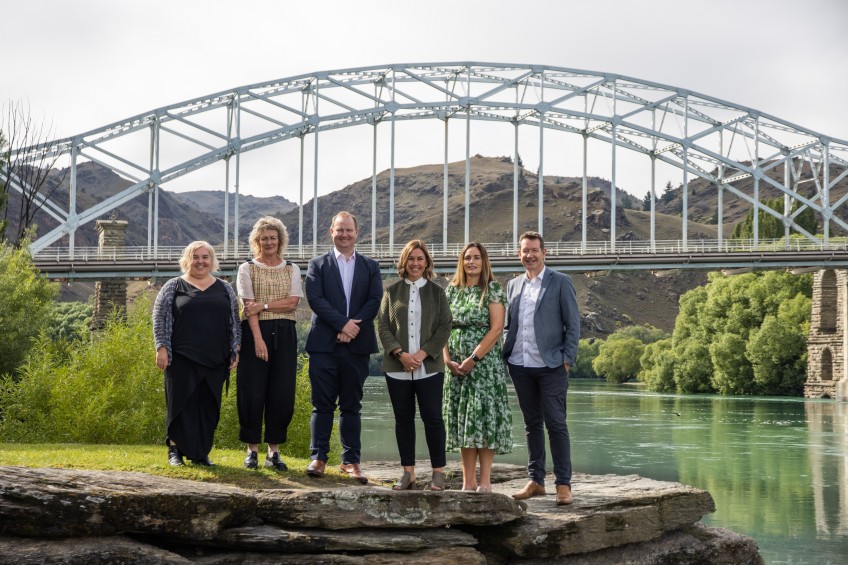 A reshuffle has been announced this morning of the bosses at the Central Otago District Council, aimed at better answering to the community and being prepared for big changes ahead for local government.

She says the new structure will give her team “more capacity to explicitly focus on the community and create the space needed for the executive to focus on some of the big conversations happening in the local government sector”.

There's only one new face in the mix, and that's David Scoones, who's come onboard as the council's community experience group manager.

His role will have him lead the parks, pools, libraries and customer services functions.

Mr Scoones, a former chair of the Cromwell Youth Trust, has returned home to New Zealand from Australia with his wife and children. Professionally, he's had a number of senior roles in the private sector, in which he's led large teams, strategy programmes and, "most importantly of all, end-to-end customer experience programmes", the media statement says.

The new role has been created within existing budgets, while elsewhere internal promotions shape the new structure.

Dylan Rushbrook, formerly the general manager of Tourism Central Otago, has stepped into the role of council's new group manager for community vision.

He will be responsible for "community development, communications and engagement, economic development, strategy and policy, and tourism".

Anthony Longman from the Tourism Central Otago team has been appointed the new head of destination to replace Mr Rushbrook in his former role.

Saskia Righarts, who's held the chief advisor role at the council since 2018, is now the group manager, business support, a role she started in September that sees her in charge of information services, risk and procurement, finance and governance functions.

She's got her work cut out for her - in September, Crux reported the council's own rules for awarding tens of millions of dollars-worth of contracts to companies weren't widely being followed by staff making decisions, after an independent review revealed "pervasive' procurement problems at the council.

There's changes ahead in this portfolio too - with Plan Change 19 proposing a suite of changes to the way the district's residential areas and zoned and managed, and fresh kerbside waste collection services set for next year.

Louise Fleck, who has been seconded to an executive role for some time leading libraries, customer services and people and culture functions, is confirmed permanently as general manager, people and culture. She will focus on Human Resources, organisational culture initiatives, and health, safety and wellbeing.

Finally, Julie Muir, formerly in charge of the council's infrastructure services, has taken on the role of three waters director in July this year – a position jointly funded by Otago and Southland councils, and continues to oversee CODC’s water services and capital works programme.

Ms Jacobs says the new structure "will help enhance our ability to achieve all the great things we are here to deliver for our community and amazing region. It will also give our executive the opportunity to focus more on the strategic space, ensuring we can engage appropriately in a rapidly changing local government environment and deliver on the vision that our elected members set on behalf of the community".

The announcement of the organisational reshuffling comes just weeks after fresh elected members were sworn in at the council. Mayor Tim Cadogan remains at the helm of the decision-making table, elected unopposed to the role of district mayor, for what will be his third triennium. He's reappointed long-term Cromwell councillor Neil Gillespie as his deputy.

Just two new councillors were voted in at October's local election - Sarah Browne, for the Cromwell Ward, and Sally Feinerman, for the Teviot Valley.