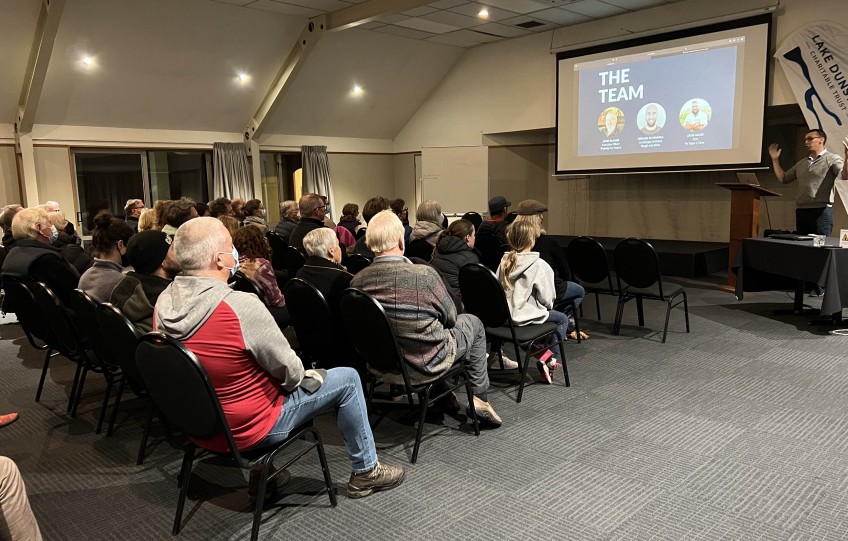 Are Cromwellians willing to ditch their cars to restore their lake?

A section of Lake Dunstan foreshore near Cromwell is set to be replanted with native trees and shrubs, but locals will need to be willing to ditch their cars to give the vegetation a fighting chance.

The plans for the “bridge to bridge” planting project were revealed at a presentation by the Lake Dunstan Charitable Trust last night.

It was an important step in delivering on a million-dollar investment by Land Information New Zealand under the umbrella of the Jobs for Nature funding.

The Lake Dunstan trust has tasked iwi-led environmental charity Te Tapu o Tāne with putting 56,000 native plants in the ground between the bridge at Lowburn and the bridge at Deadman’s Point. 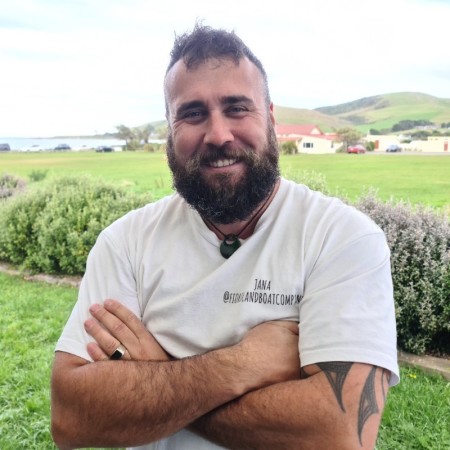 Jana Davis of Te Tapu o Tāne is tasked with planting 56,000 trees on Cromwell's lakeside, but he wants the town to step up and help him achieve something bigger.

But Te Tapu o Tāne chief executive Jana Davis, of Queenstown, says his organisation is just a “tool kit” to help scale up what needs to be a community-led project.

He challenged the 60-strong crowd to think about how the government funding can be used strategically to foster a culture of kaitiakitanga, where Cromwellians step up to form and maintain relationships with the environment in which they live.

“How do we get more students and more families and more businesses saying ‘I'm part of the Lake Dunstan biodiversity restoration’?

“The opportunity here, truly, is about connecting the community to the project, so we have more of an army with better knowledge and understanding on the impacts we’re having on the lake.”

Planting will begin this spring, when as many as 20,000 plants are expected to be put in the ground.

But pulling up lakeside in a vehicle for a picnic, swim or blatt on a boat or jetski is a loved summer ritual for locals and visitors to Cromwell alike.

Mr Davis told his audience sections of the lake will need to be no-go for vehicles, and potentially fenced off to pests, if the town’s serious about seeing the land that’s designated in the project regenerate.

Gerard O’Connell, a landscape architect with Rough Milne Mitchell in Wānaka, presented a “visionary” landscape plan for the bridge-to-bridge zone – another piece of work funded by the government money.

He says the shores of Lake Dunstan are “underutilised”, and deep vehicle ruts have “destroyed” the ground in some sections.

Although it’s obvious people in town value vehicle access to the lake, providing carparking options at regular 500-metre intervals will make it easier for people to ditch their cars, he says.

Cromwellians need to be willing to play the long game – 10, 20, or 30 year plans are too short for nature, especially in this neck of the woods, where the natural landscape has been so heavily “manipulated”, he says.

“We need to start to think 100 to 1000 years to get this right and leave behind something we can really be proud of.”

His vision isn't all 'back to nature': alongside islands of native plantings he imagines places for people to congregate, "instagrammable" photo opportunities, and story-telling with the help of scannable QR codes. 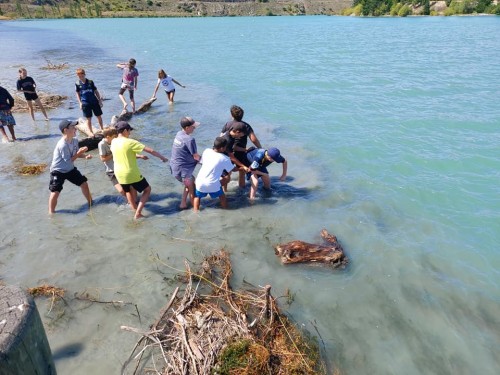 Working bee: Young Cromwell residents have a go at clearing the debris of the ever-growing beaches of silt in the Kawarau Arm of Lake Dunstan.

In response to questions from the floor on why the trust was channelling such a chunk of public money into restoring a stretch of foreshore rather than throwing it at the potentially bigger issues of invasive aquatic weeds and the silting up of the Kawarau Arm, Megan Phillips, who has been the Lake Dunstan Charitable Trust’s community engagement coordinator for the LINZ project, says work has to start somewhere.

“We’ve got to figure out a way of connecting all the dots.

“And this is the first dot.”

John Glover, the executive officer of Shaping our Future, also presented a long-term vision for Lake Dunstan, the result of community engagement that sought to “peg down” the values that residents share for the lake, at last night's event.

It was another piece of the LINZ-funded project.

The 93-page report is available here.

Part of the plan suggests locals need better information on what the future will look like for the rapidly silting-up Kawarau Arm of the lake.

Mr Glover says there’s a clear feeling within the community that people want the lake to be managed in a more organised way.

“It’s a relatively young lake, and it's changing quite rapidly.

“The population has grown quite significantly, and the pressures on the lake will be increasing quite rapidly.

“There isn't a history of having a whole series of planning rules and consenting rules, and even where there are it’s not generally understood how it works.”

The community is asking for some management coordination to ensure things do happen and do go ahead, he says.