Kiwi alpine ski racing superstar Alice Robinson has taken the win in the women’s field today at the 2022 Winter Games.

More than 80 athletes from 13 nations descended on The Hurdle at Coronet Peak for what's been the final day of alpine ski racing in the programme.

The finish by Ms Robinson, who grew up skiing Coronet Peak, means she also claims the Yellow Bib for the Giant Slalom Australia New Zealand Cup.

Andreas Zampa (SVK) has claimed the top spot in the men’s field, off the back of yesterday’s strong silver medal performance in the same discipline.

Another cold night at Coronet Peak meant the snow on course was hard and fast, providing perfect ski racing conditions.

After the first run Ms Robinson was sitting in fourth place, +0.84 behind Katie Hensien (USA), the current leader. 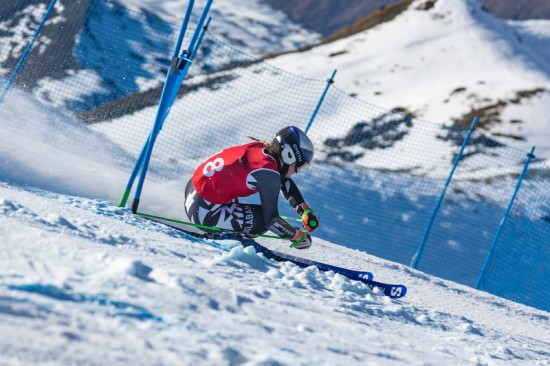 But, a blinder of a second run saw Ms Robinson close the time deficit and take the win by more than almost half a second.

Ava Sunshine (USA) finished in second place, +0.49 seconds behind Ms Robinson with Ms Hensien in third, a mere two hundredths of a second behind her teammate.

Speaking at the bottom of the course Ms Robinson said she was happy with how she raced.

“It feels so good, I am really happy with how I held myself today, first run was a little bit rusty and second run I just tried to get back to that usual race charge."

It has been a challenging FIS ANC series for Ms Robinson, who has recorded two Did Not Finish (DNF) results along with her third-place finish in the Super G event on Saturday.

“I just upped my concentration and started focusing more on the process and trusting my ability a bit more and hoping that if I skied well the results would come. Definitely a big mind change today from the last few days so I will have to keep working on that.”

Over in the men’s race, brothers Andreas and Adam Zampa (SVK) held the top two positions after run one, with Adam +0.26 behind younger brother Andreas. Yesterday’s Giant Slalom gold medalist Isaiah Nelson (USA) was sitting in third position, +0.41 behind the leader.

Andreas held his lead throughout the highly contested second run to take the win, with Mr Nelson finishing in second, just +0.16 behind him. Adam had to settle for third place, +0.32 seconds behind his younger brother.

“It is always fantastic to be in New Zealand and to do the races, so I am very happy with today’s victory," Andreas said minutes after his winning run.

He finished in third place yesterday in the same discipline, and says he looked to improve today.

“I was looking on yesterday’s video and thought that I could go a bit more direct and actually I lost so much time yesterday on the flats...So today, I think it was better.”

Today marks the end of the alpine ski racing programme at the games.

Both events will be held at Cardrona Alpine Resort and the finals will take place over the coming weekend.