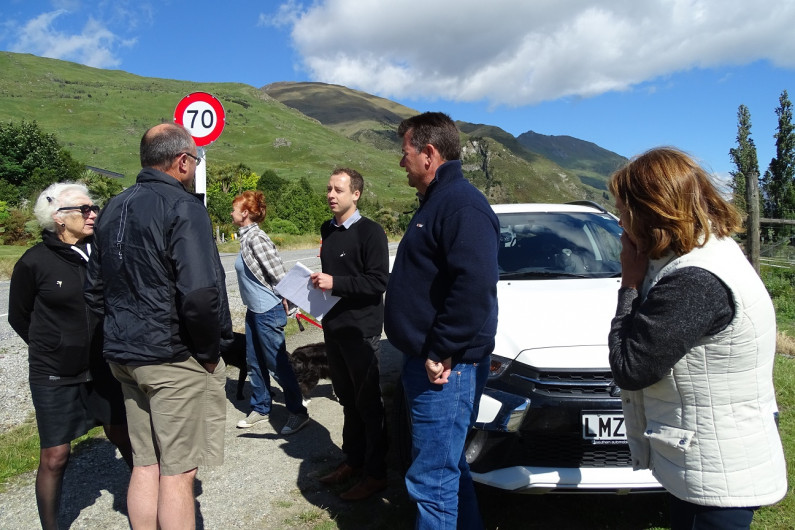 The digger illegally parked on the site of a proposed eleven metre Spark cell phone tower on Mt Aspiring Road will continue to block the tower’s construction for the time being.

On November 28th long-time Wanaka resident Barry Bruce, who lives directly opposite where the tower will be installed, drove the digger on to the site as “a last resort” to halt the construction of the tower.

Bruce and neighbours who support his protest action say Spark did not consult adequately with the affected community, and they can find no evidence that Spark considered alternative, unobtrusive, possibly more expensive sites.

“Our concern as a community is this sort of infrastructure can just be rolled out by a large corporate.  At the end of the day their motive is shareholder value and profits whereas our concern is about our community,” Bruce says.

Bruce denies reports he is worried about his property values going down when the tower goes up, saying he has lived in the same house for twenty years and hopes to live there for the next twenty years.

Neighbour and owner of the Waterfall Creek Equestrian centre, Carol Armstrong is supporting Bruce in his opposition to the tower. She says the first she knew about it was when she and her husband Colin found half their native plants ripped out next to their fence line. Just two weeks before, they had planted $1,000 worth of native trees on the road side verge.

Armstrong says it will be an eyesore and is upset at the process. “How can anyone go ahead and do that without notifying the neighbours; if we were going to put something on our property which even resembled a quarter of the size of that tower we’d have to go through an entire resource consent process.” Rippon Vineyard co-founder Lois Mills at the protest site today - "We have to take a stand - this is not fair."

Rippon Vineyard co-founder Lois Mills is also supporting Bruce and is demanding Spark enters into a dialogue with affected residents. “We’ve got to make a stand, it is not fair.”

“Temporary solutions no longer cater for this increase in traffic and there is a need for more permanent cell sites in the area - of which Mt Aspiring Road is just one.”

Baguley says work has been going on by a team of planners and RF engineers in Wanaka for some months trying to determine the best possible location. A large number of sites were evaluated and discounted but the Mt Aspiring site meets their goals.

She says the site is a permitted activity and while the consent came with a number of conditions from council, Spark was not required to ask for submissions or hold any public hearings.

This morning Queenstown Lakes District Council monitoring enforcement officer Connor Doyle met with Barry Bruce and supporters at Spark’s request to “have a chat” in attempt to have the digger removed.

Doyle made the point that under the Local Government Act he could have the digger forcibly removed but it was too big a call for him to make.

At the end of the meeting he agreed to raise the issue with his senior officer, QLDC Principal Enforcement Officer Anthony Hall, and advise Mayor Jim Boult and chief executive Mike Theelen that Bruce and his supporters would like a meeting. “I won’t be making any decisions today about the digger.”

Barry claims he wrote to QLDC Mayor Boult several weeks ago and that the Mayor said he would follow it up but Barry has heard nothing back.

Barry also says he wrote to QLDC Deputy Mayor Calum McLeod who said there was nothing he could do, and he’s had several conversations with Wanaka ward councillor and Wanaka Community Board Chair Quentin Smith. “Since then the silence has been deafening”.

Barry says he is concerned the QLDC is siding with Spark. “I appreciate Spark are following the rule book and council are  saying that Spark has done everything they should, but the position I am taking is that council is here to serve the community and listen to the community. They should give us some support, encourage Spark to talk to us and discuss other options, and not be sending their enforcement officers to push us out.” Crux contacted Wanaka Community Board Chair Quentin Smith for comment and he replied, “I understand these issues can be emotive and I sympathise with the neighbours if they are adversely affected. The powers of Spark as a utility provider are quite permissive.  WCB were made aware of the proposed site(s) by Spark as a matter of courtesy, driven by increased demand in Wanaka, and they planned to have it in place by this Christmas and the board didn’t have any specific concerns about the sites subject to engagement and required planning processes.  The WCB do not have any powers or delegations to approve or decline consent with regard to utility matters and did not make any detailed assessment or determination on the application or the proposal.”

Bruce says he has heard nothing from Spark except “corporate spin” in the media. “Ultimately, the legislation that allows a large corporate such as Spark to come into a community and place serious pieces of infrastructure without the need to consult is an issue. Maybe our central government needs to revisit it, but it is going to take pressure from communities such as ours to encourage them to re-examine that legislation.”

Crux contacted Spark today for further comment and received the following response via email from Michelle Baguley late this afternoon.

“Our primary focus is to try and meet the needs of all those people in Wanaka who rely on mobile services, and all those who will be in Wanaka over the holiday period. That situation is now becoming critical.  As such we are evaluating every option to deliver that much-needed mobile service as soon as possible.  If Mr Bruce will not move the digger then we’ll need to find alternative ways to deliver mobile coverage to cope with that demand as soon as possible.

If we are unable to complete the cell site this side of Christmas then we risk being forced to advise Wanaka customers that mobile coverage may be jeopardised over the busy holiday period – a situation we are doing everything possible to avoid.

The other new cell site in Wanaka (Stone St) was granted a resource consent on 1st October. Again there was no requirement from Council to publicly notify, however we did send a letter, site plan and brochure to six addresses and subsequently had no response.”

For further information, Spark advises residents to go to the following:  http://www.mfe.govt.nz/publications/rma/environmental-standards-telecommunication-facilities-your-neighbourhood-informati-0