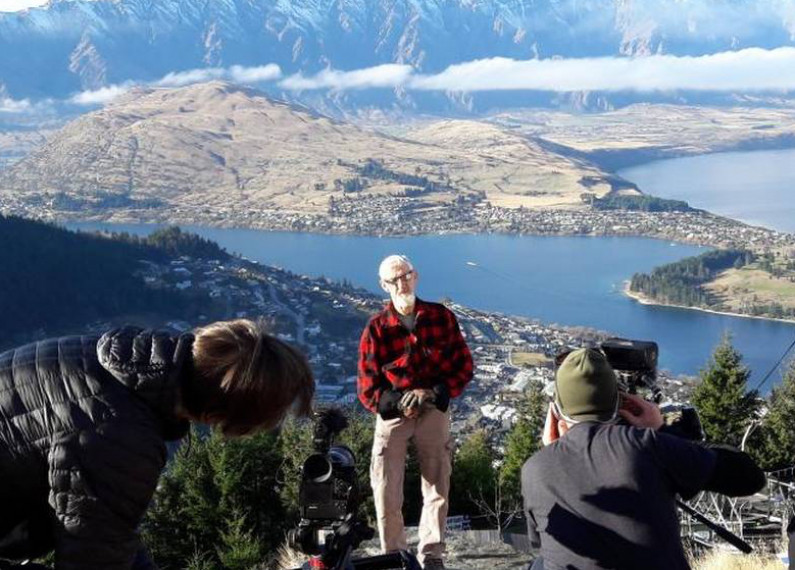 Jon Dumble was the tourism pioneer who helped found Queenstown's iconic Skyline restaurant and gondola over 50 years ago. He has written this opinion piece for Crux that pulls no punches in terms of the disastrous effect he sees inequality and over tourism having on the district.

Over the last couple of years there has been increasing public concern over the effects of over tourism.  I have spent much of my life in various aspects of tourism both in NZ and the USA, and have travelled extensively in all continents, and was a consultant to the Govt of Bhutan.  That government restricts the numbers of tourists in several ways.

There have been massive street protests in Venice, Barcelona, Amsterdam and elsewhere by residents feeling displaced by the numbers of tourists, and the infrastructure is buckling under the pressure.   Tourism is now the largest business in the world (greater than oil or automotive industries) with a turnover of 7 trillion euros a year. Over tourism in Venice - are Queenstown and Wanaka heading in the same direction or are we already there?

And we know that in NZ  it has overtaken dairy as the largest earner of overseas funds. Two old sayings are relevant - "It's a bad idea to have all your eggs in one basket", and "You are killing the  goose that lays the golden eggs. " Queenstown’s sister city of Aspen tried to limit the area that could be developed, but the result was a great escalation in property values.  The workers in Aspen can't afford to live there, so live down the road in Basalt. It is the same here  - many  workers here live in Kingston, Cromwell or Glenorchy.

Prof Herman Daly - former senior World Bank economist -" Both communism and capitalism have tried to do the impossible - grow forever.  Communism failed for various reasons and capitalism is failing now."

There is an 8-page article published by the magazine Der Spiegel of Berlin, which I recommend anyone interested should read. "How tourists are Destroying the Places They Love". I will quote a few remarks. . . . “Rome now has a street  alcohol ban from July to September.  Visitors to Dubrovnik will be restricted to 8,000 per day or the city will be stripped of its UN World Heritage site designation.”  Might this happen to Milford Sound?

Comment from a London urban planner – certain aspects of tourism are a problem - such as party tourism that is pervasive in many cities, and the unrestrained boom in holiday rentals, such as AirBNB.   These are locally relevant questions. Street alcohol restrictions have been in place in Queenstown for some time - they may have to be increased.  Police report that alcohol is the cause of many of the situations they attend.

Austin, the state capital of Texas -" The very places that made Austin so hip are being demolished to make room for the hotels and office spaces needed to accommodate the flood of tourists and newcomers who have come to enjoy what no longer exists".

Fortunately the scenery that attracts people here cannot be destroyed, but all the other effects are becoming apparent. Places that we once considered sacrosanct, such as the Ladies Mile, are now available for development. At the AGM of Shaping our Future the Mayor Jim Boult remarked " There may have to be some controls put in place".

There is another subject that has so far received no attention, and that is the change in the demographic – the global rise of the mega-rich including Silicon Valley tech billionaires and recent Russian business oligarchs. . This is becoming apparent here.  The increase in property values here which now exceeds Auckland’s, is partly due to the unlimited funds that overseas investors have available.

There is also a website available "Where can I hide if the global economy collapses?" and they give the same advice  - NZ is number one. My experiences in USA introduced me to the mega-rich.  Working in Maine at a high-end resort on Mt Desert Island  (mostly owned by the Rockefellers, who still have their 60-room mansion there) the guests were elites from Boston, Philadelphia, New York and Washington, D.C. In Florida it was similar - Gasparilla Island and hotel is  mostly owned by the du Ponts.  When I left Florida to return to NZ I was a houseguest of Andrew Carnegie’s grand-daughter in Lexington, Kentucky.    Anyone interested may wish to check out the TED talk by multimillionaire Nick Hanauer entitled " Beware fellow plutocrats - the pitchforks are coming. "

There were over 1,500 private jets at the Davos economic summit last year. Short term, mega rich visitors - just like Queenstown. Image: The Guardian

The wealth inequality in the USA is greater than in the Gilded Age, or in the Roaring Twenties, and we know what happened after that.   Inequality in NZ has escalated greatly since I grew up in a State house in the 1940s.  Again I quote Prof. Herman Daly- "When people are as rich as that they are virtually a different species. They have no empathy or understanding of the rest of society."

These are those who have properties in several countries, a 300-foot yacht and a Lear jet or two. Davos this year had 1,500 private jets parked.  They are here for a short time, and are not members of the community.  I would stress that this is not a general criticism of plutocrats - there are a number of rich residents - both long term and recent - who have greatly benefited the local community.