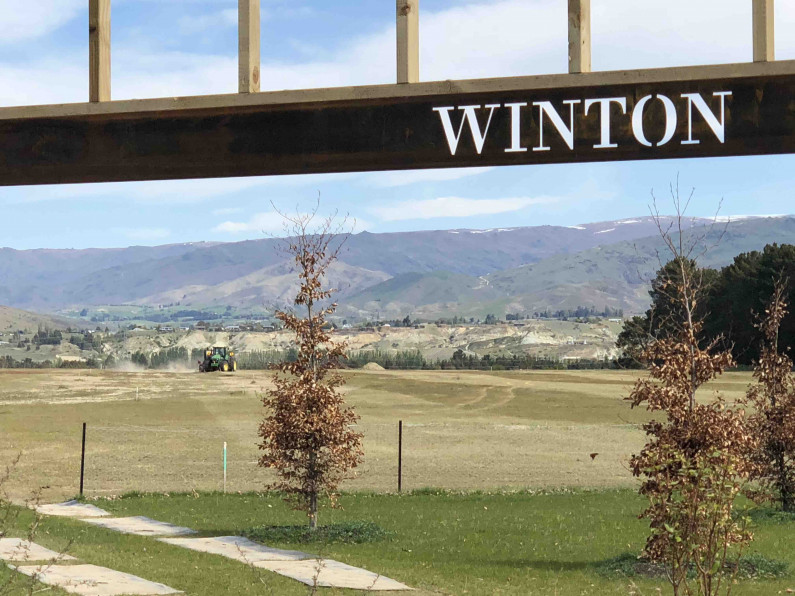 Opinion. Simon Giles is a 737 Captain with Virgin Australia and has made the decision to make Cromwell his home along with wife Lynda - she's a GP originally from Wyndham. Simon is a former RAAF pilot where he flew a variety of military aircraft. He's written to Crux with a detailed document that explains why he feels so strongly about the current Plan Change that is linked to the proposed River Terrace subdivision.

The Proposal in a Nutshell

Generated by Queenstown developers Chris and Michaela Meehan, the request seeks to rezone what is essentially rural land, to cram up to 900 medium and high density dwellings onto their 50 hectare site on Sandflat Road.

In the context of the Cromwell Basin, the Plan Change 13 development would be a very large undertaking, in effect adding a satellite town approximately the size of Arrowtown. This sudden 40% population increase would have significant cultural impact on the local community. Residential developments on this scale should be based around a transport node and or retail/service hub - not shoehorned onto a rural paddock.

Of course, it is well known that the proposed site is surrounded by well established incompatible businesses. It has its own distinctive acoustic environment care of the Speedway, Highlands Motorsport Park and nearby orchard activity. Virgin Australia 737 Captain and Cromwell resident Simon Giles. "The plan change is in no one's interests except for the developer."

The Speedway has occupied its site for about 90 years, the orchards for many years and Highlands Motorsport Park for 5 years. All three have operated successfully in a closely scrutinised and legislated environment. Specifically, Highlands Motorsport Park  was carefully located on unproductive land after extensive planning and negotiation with interested parties. It is also designed to world’s best practice standards for noise abatement. For example, in the interests of the surrounding community Highlands works with its experts to minimise both engine and tyre noise - a step rarely seen in the motorsport community. It is now an established, successful and growing business bringing significant benefit and cachet to the Cromwell community. More than just a car racing track, it was conceived from the outset as a versatile family orientated attraction. If Cromwell was to lose Highlands, history shows that it would be extremely difficult, if not impossible to replace. The home page of the Cromwell.org.nz website describes the town in glowing terms as a destination in its own right including a description of Cromwell as....’the home of the famous Highlands Motorsport Park, a popular visitor attraction for the whole family’.

Unequivocally, Cromwell is a destination, not a dormitory.

Analysis of the Submissions

The Plan Change 13 Request has attracted an unprecedentedly high number of submissions. These are publicly available on the Otago District Council website and an analysis is revealing.

Two Submissions support the Request - one of which is lodged by the developers themselves.

A small number could be characterised are neutral or more accurately as requests for further information. They include organisations such as NZ Transport, TransPower and the Otago Regional Council.

Notably, the Ministry of Education submission quotes demographics indicating that the proposed school is not required. The development would not generate enough pupils and it does not adjoin any existing or zoned urban area.

Several significant entities oppose Plan Change 13. These include the District Health Board (South) - on noise Health and Safety grounds and Horticulture NZ - on loss of scarce agricultural land and the inhibition of nearby orchard activity.

Nearby orchards, Mt Difficulty winery and other export revenue generating and tourism entities have also lodged submissions against the Plan Change.

The remaining 400 or so submissions from ratepayers and local businesses are totally opposed to Plan Change 13 on the grounds of poor urban planning and or incompatibility with existing land uses.

The only business entities that could be characterised as supporting Plan Change 13 in any way, are limited to those employed to market the proposal. They are listed below along with the document title they contributed in the original Request.

This Report is highlighted for special attention for two reasons. Firstly, to the lay reader, it’s presentation style stands out from the surrounding pages of words. Secondly, as a well respected architecture firm with a New Zealand wide profile, accepting any brief puts the author’s reputation on the line.

The purpose of  the Design Report in Jasmax’ own words is ‘to describe the rationale behind this developing proposal, using images and words to illustrate how the proposed development responds to the opportunities and constraints of the site and surrounding area. It presents the analysis and thinking behind the design of the proposed development.’ The reports supporting the Plan Change are so complex that it costs $100 to get them supplied as hard copies.

It is disappointing therefore, to note that the authors have limited their effort to the confines of the developers land holding rather than considering the actual context of the site.

To claim that a high quality, cohesive urban neighbourhood could be achieved beggars belief and undermines their professional credibility. With almost no acknowledgement of the nearby established land uses, the Design Report sugarcoats the developer’s delusion, presenting a generic urban utopia which would be unachievable in a noisy environment.

Any reading of the Submissions will confirm that, among those qualified to make an informed assessment, there is no support for medium/high density development on this site.

It is not known if Jasmax intends further involvement beyond its Design Report. Clearly, it would be an ambitious architect who would promise technical solutions capable of achieving the required acoustic and ventilation amenity, constrained by the developers ‘affordable housing’ objective.

The developers claim they would address noise related amenity in three ways. None would be effective in creating a desirable place to live - all demean the intelligence of the wider community.

Firstly, to paraphrase - they bizarrely suggest, ‘Buyer beware - if you are sensitive to noise, don’t buy here’. This is nonsense. Noise is ‘unwanted sound’ - by definition everyone is sensitive to noise. It follows that buying here, knowingly subjecting oneself to unwanted sound, would indeed be a strange choice.

Secondly, they specify minimal acoustic insulation requirements for ‘noise sensitive spaces’ within buildings. For example, insulated spaces would include bedrooms but not hallways, classrooms but not lobbies. Even this piecemeal treatment would add significant cost. Further to this, the most cursory study of the developer’s own acoustic assessment confirms that it would be technically impossible to provide a comfortable outdoor acoustic environment for a significant number of days and evenings each year.  At these times, the developer’s own Acoustic Assessment helpfully suggests that the best option for residents may be to leave the area!

Thus, both the ‘affordable housing’ and ‘high quality amenity’ objectives of the proposal are demonstrably unachievable.

Note, the Acoustic Assessment appears to be an afterthought, added to the original documentation by the developers as an attachment in their June submission.

Thirdly, and most offensively, the developers attempt to rely on imposing draconian rules in the form of ‘no complaint’ covenants on all potential residents. It would be an act of astonishing cynicism, to knowingly burden Cromwell community relationships in perpetuity with 40% of the population prohibited by law from complaining about a well understood noisy environment. In their own words at Page 18 of the Request Document - ‘Rules enable the development to coexist with the existing mix of activities in the wider area, including the Motorsport activities, orchards and other rural activities, and the state highway’. The creation of this new Special Resource Area would give the developers excessive control over a large percentage of the community, effectively creating a modern day ghetto on the fringes of town.

Decades of confrontation would ensue, as unhappy residents belatedly come to the realisation that their new homes can never provide tolerable amenity.

The innocent parties in this situation - the pre-existing legal noise generating businesses - would of course come under enormous pressure to curtail their activities. In the case of Highlands Motorsport Park, time sensitive business decisions are already being effected with negative consequences for the the regional economy. Their proposed golf resort development is one example.

- the Queenstown to Cromwell road (SH 6) including the Shotover Bridge (already at capacity) would be clogged up, adding significantly to journey times and crash risk for both commuters and tourists,

- there is insufficient provision for car parking - only a single car park space per dwelling with the overflow forced onto streets too narrow for the purpose,

- there is no guarantee that any proposed green spaces/parks would be protected under Council management, nor do these spaces connect with any existing,

- there is no connection to reliable public transport,

- 50 hectares of valuable agricultural land would be lost forever,

- there is no provision for cycle or pedestrian transit to the site, only within its boundaries,

- there would be a lack of supporting infrastructure. This would have to be provided by Council placing substantial burden on Cromwell ratepayers,

- the inclusion of a school and retirement accommodation in the proposal is unsound. It is not possible to achieve easy and safe access to important town facilities and the wider community,

- the development would not represent a logical progression for the residential growth of Cromwell and would result in out of centre development. Land should be release sequentially, not on an ad-hoc basis, and

-  an overcrowded, urban design would degrade the horticultural visual aesthetic that is becoming one of the Cromwell basin’s tourist draw cards.

In my opinion, the proposers of this development have not come close to making a valid case for their application to succeed. A review of the submissions confirms that Cromwell residents and businesses agree with me.

Council needs to act on the side of its constituency.

This proposal is not controversial, rather it is unanimously opposed.

For the reasons described above, it amounts to nothing less than town planning vandalism and an exercise in the opportunistic desecration of Cromwell’s renowned amenity.

The site should remain zoned rural or when required, rezoned to light industrial to facilitate activities complimentary to currently established uses.

I support appropriate medium and even high density residential in the correct context.

Aside from a potential quick profit for the developers, any residential development on the Sandflat Road site would be in no one’s interest.

You can find all the relevant documentation at: