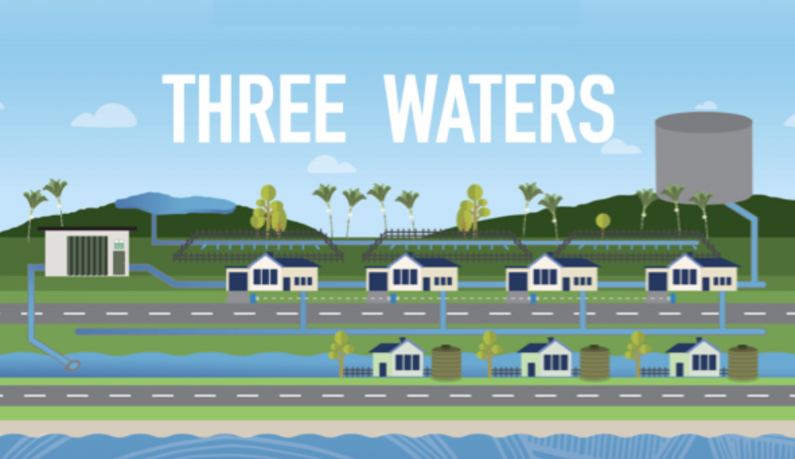 In case you missed it, the ‘Reform of Just About Everything’ is underway – including the inter-dependent reforms of Resource Management, 3 Waters, and Local Government.

Unfortunately, these pieces of work are being progressed all-at-once, rather than in a logical sequence and it’s impossible to tell how the multiple pieces of new legislation will work together. On 3 Waters Reform, the Government has considered just one solution (one model to address funding issues), and now the numbers presented in its defense don’t stack up. They’re not even in the ballpark.

A sledgehammer raised to strike a structural wall comes to mind. The ‘wall’ is local democracy and I’d say we have a very brief ‘window’ to stop the destruction.

A BRIEF OVERVIEW OF AMALGAMATION

A subset of the 3 Waters Reform program is the proposed amalgamation of water assets and services into 4 large ‘entities’. This is what Councils are currently grappling with – whether to hand over their assets or ‘opt out’ of the reform. Although there may no longer be an option; ‘Jump or be pushed’ is the word on the ‘street’ (or around Council tables).

If the Government has its way, the 4 proposed entities will control the delivery of all water services, with oversight from Taumata Arawai (the new water regulator) and an economic regulator. It’s essentially the same model used in Scotland (but with 4 entities rather than 1) and the team from Scottish Water have been working with the Department of Internal Affairs on this for some time now. However, it is worth noting that when Scotland had 5 service providers, it wasn’t working.

Under the proposed model, councils would collectively ‘own’ the assets but not in any real sense. Local Government and iwi would have 50/50 control of the Board that appoints the Board of the entity – the ‘one step removed’ is to ensure balance sheet separation so the entity can borrow more than Councils. So there is no meaningful ownership or governance role at all – it’s a token at best. And despite the separation, the Government will still have to underwrite the entities’ debt to achieve the levels of investment required.

Continued public ‘ownership’ is apparently a bottom line, but it’s also acknowledged that there are no immoveable protections against privatisation. It would always be a risk. And it’s not lost on Councils that if the Government can amend the LGA to take our assets now, the Government can also amend the legislation to remove privatisation protections ‘down the track’.

Of course we all want everyone in this country to have access to clean water, and we want to ensure wastewater doesn’t contaminate water bodies, and we want storm water to be properly regulated and managed. The Government’s objective is laudable and not up for debate – but how we achieve it is. There is never just one route to take – usually there are many and they all have upsides and downsides. The thorough consideration of different options and the weighing up of ‘pros’ and ‘cons’ and any unintended consequences is a critical step in ensuring good outcomes. So critical that it’s a requirement under the Local Government Act. So is consultation – with all stakeholders and with the community. It removes the risk of ‘group-think’, capture by lobby groups and loss of trust in our democratic institutions.

So, the big question is this: How and why did the Government decide it needed to wrestle 3 waters assets from local Councils without transparently considering other options and without talking to local government?

I can’t answer that but I can highlight the prominence of the infrastructure industry, the sidelining of local government and the laser-focus on economies of scale. Readers can draw their own conclusions about who benefits most from large entities procuring for large infrastructure projects and large service contracts. And who doesn’t. And where the profits might go…

Infrastructure New Zealand (INZ) is an industry lobby group representing law firms, banks, construction companies, crown entities and some councils. The Construction Bank of China is on its membership list. Those that fund INZ are, for the most part, large companies that make their money from large infrastructure projects.

INZ’s website boasts an extensive back catalogue of reports and submissions. One of the consistent themes is advocacy for reduced local governance; regional governance is preferred. Another is increased funding for growth. No surprises there and none of this is a secret – the membership is transparent, the policy is transparent and well thought through, and INZ has every right to lobby. It’s the Government’s job to ensure it is not ‘captured’ and to ensure that it listens to everyone, including Councils.

Anyway, in March 2017, 6 months after the water contamination incident in Havelock North, Infrastructure New Zealand led a delegation of 33 senior public and private infrastructure representatives to London, Edinburgh and Glasgow. The purpose was to investigate Scotland’s infrastructure decision-making system and bring back learnings for New Zealand. In June 2017, INZ produced a report called “Building National Infrastructure Capability – Lessons from Scotland”

These were the recommendations in the Report:

It’s interesting that most of these recommendations have either been implemented since the report was written, or are in the process of being implemented. The point is not that the policies are bad (although the recommendations to consolidate water services and to privatise Watercare are concerning); the point is we have an industry lobby group with a particular world view (whose members stand to profit from its policies), that is effectively writing Government policy without the checks and balances, or different perspectives and values, that multiple stakeholders can provide.

A MESSAGE FOR CAUCUS

This reform programme is a once in a generation (or 2 or 3) event so we need to get it right. Remember that Scottish Water is not perfect (Google “Scotland and sewerage overflows”) and that Government is not even pitching the ‘one entity’ Scottish model (it’s pitching 4).

Don’t think that the undermining of local democracy or the loss of economies of scope will be remembered fondly in years to come. Currently, councils can integrate projects like new active travel routes with 3 Waters works, achieving cost savings and consequential benefits that would generally not be possible if they didn’t control the assets. They can also integrate plan changes and infrastructure delivery. And so on. Properly regulated and funded, local government can be agile and clever about achieving efficiencies at every scale. Because of economies of scope.

So my request to Central Government is this: First, take a breath and stop the work the DIA is doing on amalgamation – there is no rush because the entities won’t ‘kick in’ until 2024 anyway. Secondly, release LGNZ from the Heads of Agreement that has rendered it a mute and ineffective lobby group for local government at a time when it needs its voice. Thirdly, go back to the drawing board in partnership with iwi, mana whenua and all councils to consider other options, including tools such as (and there will be plenty of others):

Lastly, undertake a thorough assessment of all options for solving the current funding and capacity issues, taking into account all the costs and benefits, including the benefits of both economies of scale and economies of scope. One of those options must be the ‘wait and see’ approach plus any combination of 1-7 above, because it is entirely possible that with Taumata Arawai on the scene, a few tweaks to the system are all that is needed.

It would also pay to have a long, hard think about whether you want to amend the RMA and the LGA to take Councils’ water permits and water assets ‘by (legislative) force’ – because people will take to the streets.

You are messing with local democracy and with our wai; we know what’s at stake and it’s worth fighting for (speaking figuratively, of course).