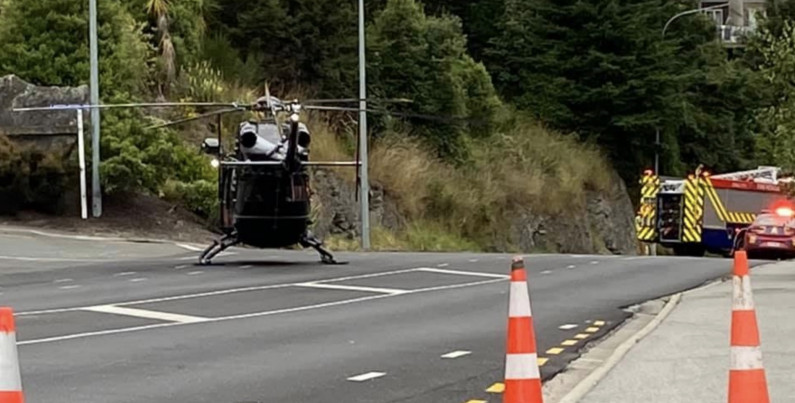 There has been widespread concern and criticism today over the handling of the 7.25 am accident on Frankton Road. The accident brought Queenstown to a standstill with no traffic management evident until three hours after the initial incident.

Crux has received a detailed response from Mayor Jim Boult and initial comments from the Police. We also publish below an email from a Crux reader that details the extent of what appears to be a major communications and logistics breakdown that could have implications for future emergencies including even a minor earthquake.

1)      A serious accident (not a “very minor incident”) occurred at 7.25 am this morning which resulted in life threatening injuries to a person. The only immediate concern is for the injured to be taken care of. Surely that is obvious – I am sure the person being treated in Dunedin hospital at present will not see the matter as minor – a delayed arrival at the show would however seem minor in comparison.

2)      Your correspondent in her criticism of QLDC does not seem to be aware the fact that the road concerned is a state highway, not under the control of QLDC. It is for that body to manage actions following an incident on their highway. They also control messaging that went to the public – not QLDC – that is pretty obvious from what was available.

3)      The messaging also included advice not to undertake unnecessary travel.

4)      That said, I was informed of the issue by police at 9.14 am and the fact that the road would be closed for some time while police investigated the cause of this serious accident. It is entirely in police hands to decide when the road reopens.

5)      At 9.17 am, despite this being an NZTA issue, I instructed council staff to get involved and set up traffic management in the form of controls at the Edith Cavell bridge where the one lane bridge causes traffic jams. This has happen when the state highway has been closed in the past so we are aware of what is required.

6)      Our contractors immediately pulled together a traffic management team to undertake this task and that lasted until the state highway reopened – you will appreciate that they don’t have people sitting around waiting for an accident so it took a little time to gather those required.

7)      Constant dialogue took place between council staff controlling the issue, the police, NZTA and myself until the issue was resolved at 11.43 am.

8)      A bus service was put in place at both ends of the accident scene with passengers only needing to take the walk in between.

9)      I have said on numerous occasions that a new bridge is required at Edith Cavell and this underscores the case. That is why we are working on a bed tax to get funding for these types of projects.

10)   The geography of the district allows only limited road access in and out of town. When serious accidents occur this situation will occur.

11)   I do not accept that council staff can have done more. That said, these incidents are learning opportunities and I will ask for a debrief of all those involved asap.

Crux reader Joan Kiernan sent this account of the emergency management - or lack of it.

"We were heading to the Lake Hayes A&P Show.  Before we left, I happened to check the headlines and saw that there had been an accident on Frankton Road THREE HOURS previously, BUT TRAFFIC MANAGEMENT WAS IN PLACE. I naively took this to mean that the situation was under control, and we would either be single-laned along Frankton Road or told the road was still closed when we got to the Gorge Road/Stanley St roundabout and given the option to use the Gorge Road route. If that looked too bad, we could just abort our mission and come back home.

When we did reach the roundabout, it was obvious that there was a lot of traffic on the Gorge Road route, and NO INDICATION whatsoever that Frankton Road was still closed - no cops, no Southern Safety, no Downer or Fulton Hogan - NOTHING. No people, no signage. So we naturally assumed that the road must have just opened, at least partly, and the traffic on Gorge Road was just clearing.

We reached the traffic queue on Frankton Road just at the 70-kph limit sign, and as it seemed to be moving, albeit slowly, we decided to persevere - after all, if the road was closed, there would have been signs, or cops, or something...wouldn't there??? It was only after about 40 mins that we started to realise that all of the traffic coming the other way was the result of people doing U-turns - that was the only reason we were moving at all.

Still nobody, no signs, no information.

Finally we got to the top  of the queue and met a Fulton Hogan worker  - he said the road was closed and we need to turn back.

He also claimed at one point that he himself was the only person directing traffic, and that he had had to leave Stanley St and come out to Frankton Road because he couldn't manage it all from there because people were going up all the side-streets to still get onto Frankton Road.

We drove back through the increasing mayhem in town - still NOTHING or nobody at any point to explain to people what was going on, I was half-tempted to get out and start doing it myself - and honestly, if the Mayor had called out any bunch of common-sense, well-organised  Queenstown volunteers at 7.30am this morning, we would have done a better job of managing this.

It was a totally terrifying indication of what things would be like if anything really bad happened here - there is clearly NO ABILITY whatsoever among any of QLDC's contractors to step up to the unexpected. God know what it would be like if we ever really need them....

Our Mayor and Council need to be left in no doubt as to the impact of this on any confidence the community might have placed in them before....."    Joan Kiernan.

Crux has made further enquiries of the police but so far this is their response. We assume that this response from Police National Headquarters in Wellington means the Edit Cavell Bridge when they refer to the "Shotover Bridge." We've requested clarification.

"Traffic management was requested very shortly after Police arrived on the scene. Two traffic alerts/media releases were issued. Traffic control was also later requested at the Shotover Bridge where the diversion took motorists, shortly after the diversions were put in place.

This was requested from the traffic operations centre.

It's important to note in serious crashes that Police's first priority is the victims of the crash. In this case, a person was critically injured and we owe it to that person and their family to conduct a thorough investigation of the incident."