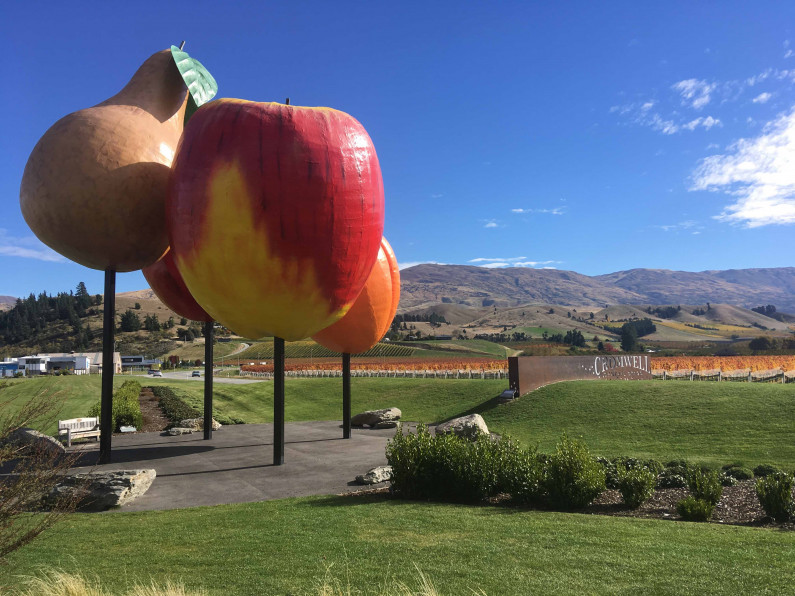 Big Fruit changes on the way for Cromwell

Aimee Wilson looks at some of the plans in the pipeline for Cromwell's iconic Big Fruit sculpture.

Rakaia and Gore have trout, Paeroa has a big bottle of fizz, and Cromwell has the BIG FRUIT sculpture.  There is also a carrot, a sausage and a gumboot floating around New Zealand somewhere.

But the big 1.7 tonne apple, pear, nectarine and apricot landmark have for years been missing grapes and cherries - now two of the largest growth industries in the area. Otto Muller - "no room for any more fruit"

Original designer Otto Muller doesn’t think any more fruit should be added (there isn’t room in the salad), but retired viticulturist Robin Dicey has other ideas.

“I would like to see a bottle of wine there with a tap and a hose coming down so people can have a wee taste….it would be a world first,” he said.

How the 300-400 litre bottle of wine would be kept replenished was another story, but for $1 a taste it could even generate some income for the town.

Robin said the sculpture was very out of date but that’s just the way it was.

“There are very few apples around and only a few pears left…it would be nice if it was more reflective of the horticulture and viticulture industries.”

At one stage there was even talk about moving the fruit sculpture back towards the mall.  But the point, Otto said, was to attract motorists from the main highway - so they would slow down, put their left blinker on, and pull over.

Originally a Cromwell Rotary Club project, the landmark cost $64,000 to build and a further $24,000 in voluntary labour.  It was completed in November 3, 1989, and as deputy Mayor Neil Gillespie recently said, “New York may be nicknamed the ‘big apple’ but Cromwell has the real thing.”

Otto was the Rotary club secretary back in the 1980s when the idea was first mooted.  The council asked the community for opinions about what could be done to attract more visitors.

So Otto suggested a gigantic fruit bowl.   “At that time there were no trees around here.”

People asked why it didn’t have any grapes?  “A grape wouldn’t look good from a distance. It’s not bright enough. The fruit has to be massive,” he said.

His argument for the sculpture also being devoid of cherries was “they would look like pumpkin if they were too big.   And cherries were not important at that time, like they are now.” Back in the day - is the Big Fruit ageing well, like a fine wine, or is it time for a change? Note the lack of trees!

The former international engineer just celebrated his 96th birthday last Monday, and while he might have his fruit and veg a little mixed up, he does know a thing or two about walnuts.

Originally from Switzerland and fluent in five languages, 10 years ago he invented a machine that gently shakes walnuts off the trees, which then fall into a catcher and are funneled into a bin.

His latest involves a similar technique to harvest the walnuts using the harmonic frequency of an apple tree to shake the fruit off without bruising it.

“Over a period of 30 seconds they can fall - but not on each other.”

When he first came to New Zealand he introduced a new frost fighting method using water instead of oil, ‘thermal dynamics,’ and in India he made inventions for rice cultivation and sugar cane - overall producing 10 different patents worldwide.

Meanwhile, the Big Fruit has recently received a $60,000+ makeover in the way of a paint job to brighten it up.

The last time it was painted was back in 2016 and before that it hadn’t received any attention for 12 years.

But there is hope for the almost antique and out-of-date sculpture yet.

Cromwell Rotary president Craig Lunn said just this week that the group had cherries and grapes on its list of projects next year - more than 30 years after it was built.

“But we don’t want to take away from what’s already there now.  Next year we’ll make a start at putting something else underneath it.”

He said people have suggested they rip the old sculpture down and design a whole new one.

“But if Gore ran out of brown trout would they turn around and rip it down?”