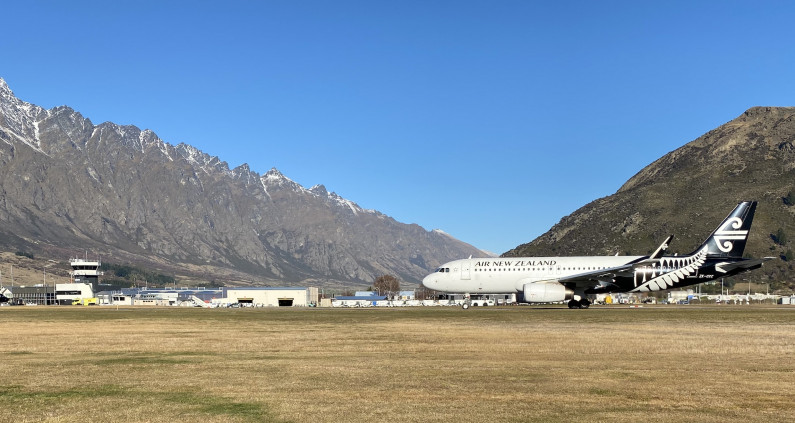 The much delayed study into airport and tourism expansion for the Southern Lakes has shown a strong community preference for no expansion at all. The 236 page report summarised on page 22 the sentiment of those surveyed - with the only green/positive vote being for no airport change - the status quo.

On a first read, the report seems to support an argument for no current expansion with a new international airport being eventually built in a new rural location away from Wanaka and Queenstown.

The only positive response overall (green shaded area) was for the status quo.

"The key reason that some stakeholders feel positively about the Status Quo Scenario is it effectively puts a ‘pause’ on airport expansion and, by association, a pause on growth."

However, the report failed to identify as more than "moderate" any negative social effects from any of the four scenarios studied. The classification "major" simply did not appear.

Social impacts - never worse than "moderate" across all four scenarios

In looking at the economic benefits of airport growth the report made an argument for the greatest benefit to be linked to Wanaka airport expansion (Scenario 3) noting:

"Over the period from 2030 to 2050, Scenario 3 is expected to generate the greatest economic benefit to the Queenstown-Lakes district (jobs, employment, network operating costs and productivity). This is because flight capacity is constrained under Scenario 4 from 2030 until 2035 when the new airport is built. Similarly, under Scenario 2, flight capacity limits are reached in 2045.:

The report did record very high levels of negative community sentiment towards the environmental impacts of current airport activity. 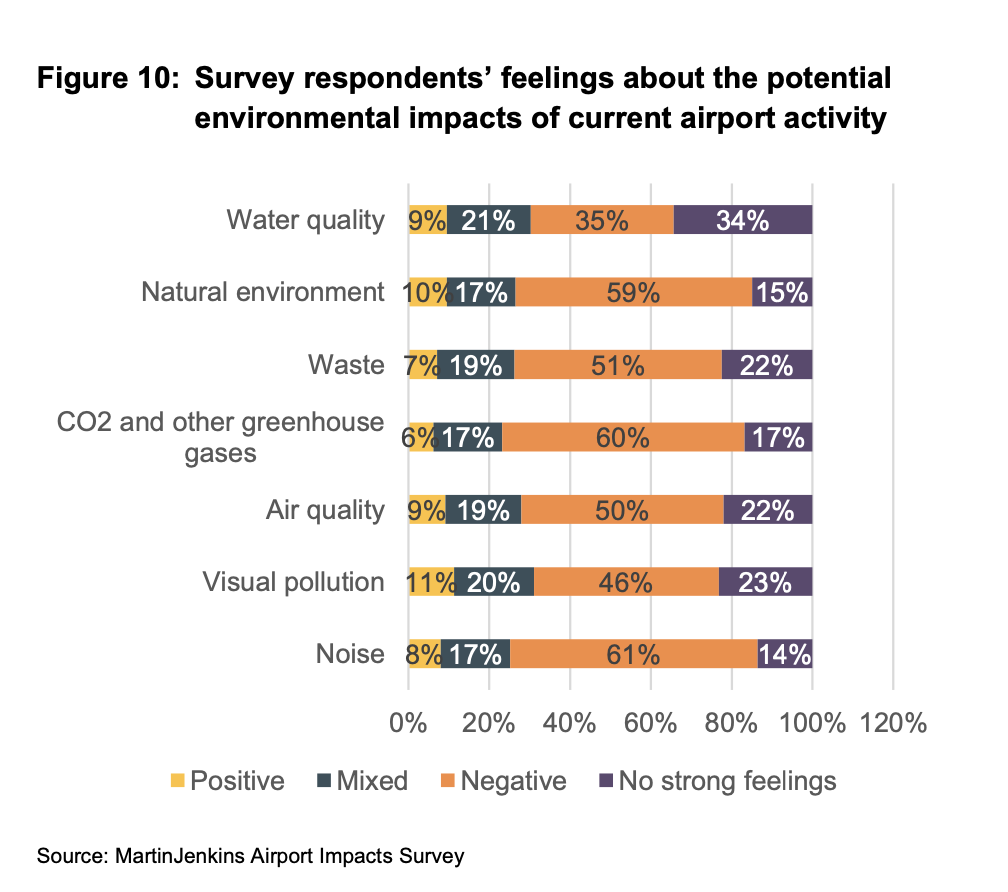 Not a happy picture - survey results on the environmental effects of current airport operations.

A majority of survey respondents felt negatively towards the idea of expanding noise boundaries at Queenstown airport - Scenario 2. 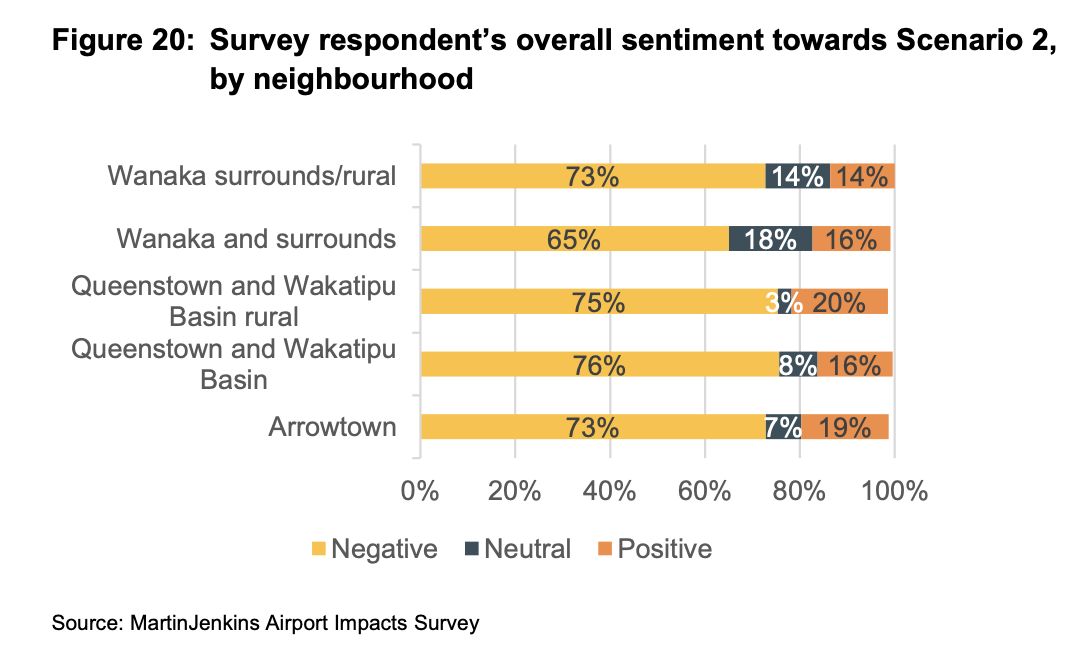 There was near universal disapproval across the district for Queenstown airport expansion - Scenario 2.

Even higher levels of negative responses were recorded by the study into Wanaka airport expansion to include scheduled services. 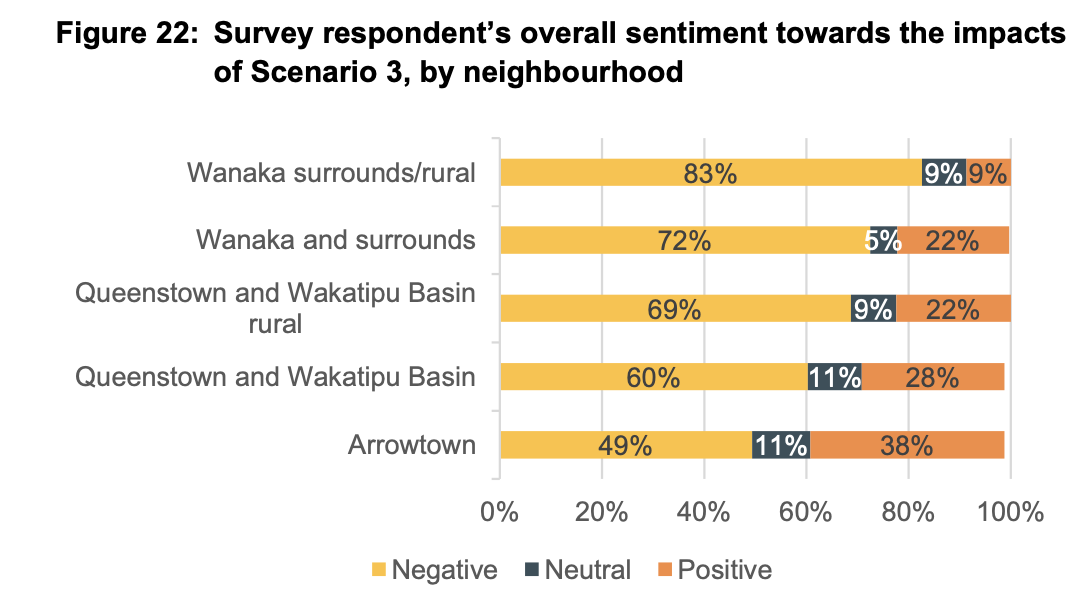 It seems clear that support for Wanaka airport expansion (Scenario 3) is very low - even in Queenstown.

There was less negative sentiment to a new international airport at a totally new (rural) site - but support was far from universal. 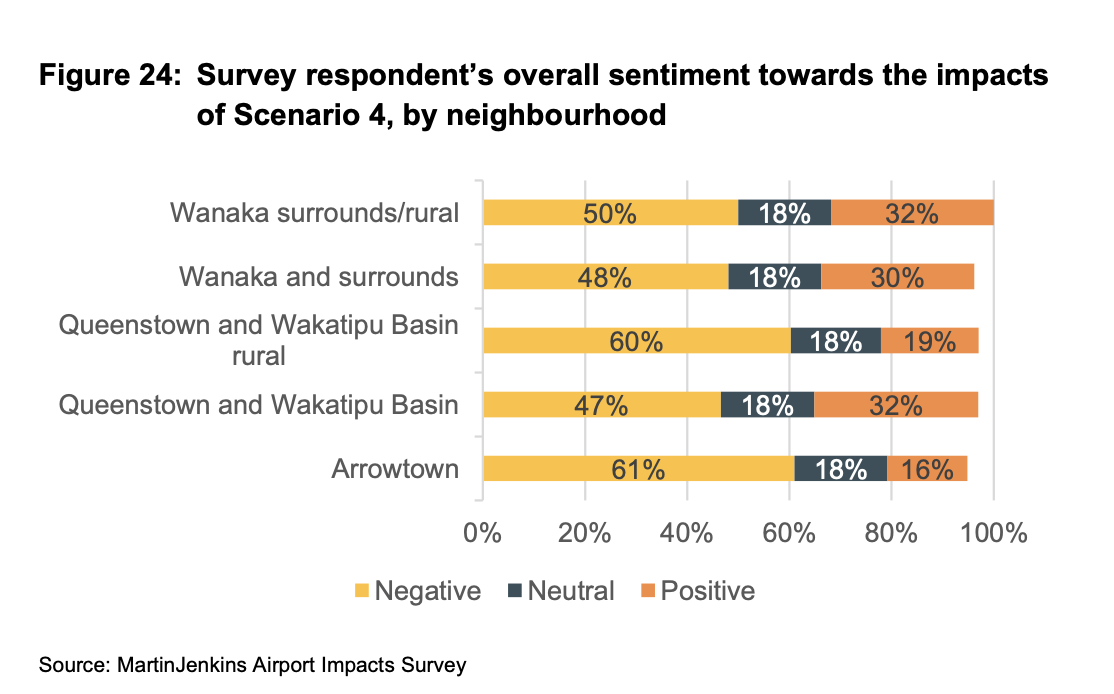 A new international airport (rural - Scenario 4) had more support than Wanaka expansion - but not by a huge margin.

On Covid 19 the report makes the following observation:

"What we do know is that COVID-19 has removed the immediate pressures on airport infrastructure and will affect the district’s future growth in the medium-term. We are also confident the Queenstown-Lakes district will continue to be a desirable place to live and visit in the future and will continue to be an attractive destination for domestic tourists and international tourism once international travel restrictions begin to free up. Although the issues and impacts identified in this report do not exist in the immediate future, they remain valid and are likely to become relevant again at some point."

You can read the full report here.