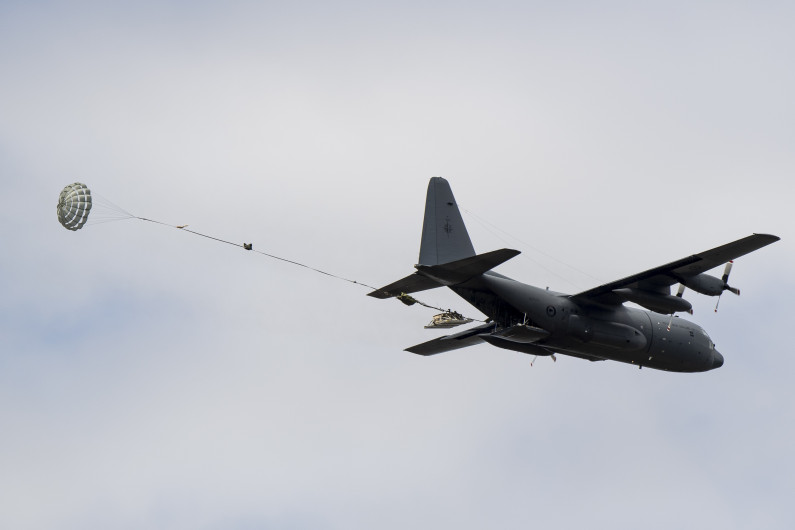 The Royal New Zealand Air Force (RNZAF) will be bringing Exercise Skytrain to Wanaka and the surrounding regions from 15-26 March 2021.

Exercise Skytrain is a C-130 Hercules training activity used by No. 40 Squadron to consolidate skills learnt at Base Auckland. The exercise provides crews with a range of flying training, including over unfamiliar and challenging terrain, coordinating pallet drops into drop zones and landing the aircraft on runways different to those in Auckland.

Detachment Commander Squadron Leader Rob Attrill says one C-130 Hercules and personnel from Auckland, Ohakea and Woodbourne will deploy to Wanaka for the exercise.

“An important part of our training is being able to operate effectively and successfully away from our home base so every year we run a Skytrain exercise in New Zealand to further hone these skills. Skytrain exercises our support elements in supporting airborne operations and further prepares us for overseas-based exercises with our partners, and ultimately operations in support of New Zealand interests,” he said..

“We have used these skills in real-life scenarios. For instance in December 2019 we deployed on US Air Force-led Operation Christmas Drop out of Guam where we delivered pallet loads of goods via C-130 airdrops to people living on remote islands and atolls in the Pacific.

“We are looking forward to coming to Wanaka. Communities in the south are largely supportive of the Air Force and it will be great to support local businesses while we are here,” Squadron Leader Attrill said.

While the exercise will be based out of Wanaka, the Hercules will also be conducting landings at Timaru and Oamaru airfields and flying around the lower South Island. Some of this flying will be low-level tactical flying, which is a core skill aircrews need to maintain. Members of the public may see the aircraft flying lower than normal.