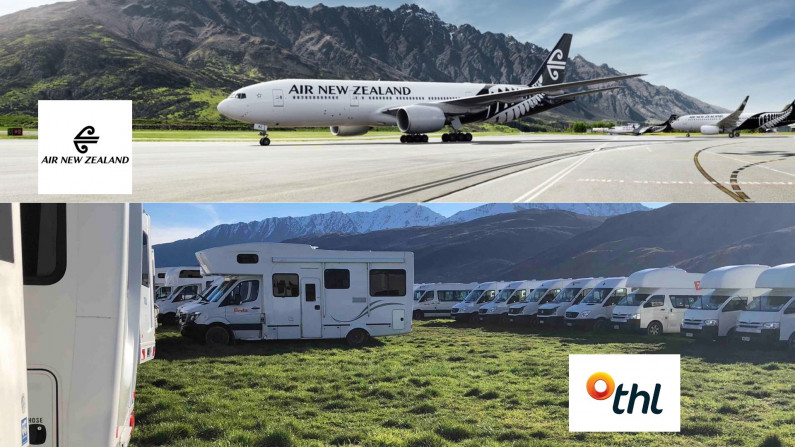 Air NZ and THL - we need to talk

Lots of things happen at Crux that we don't report. That often includes large companies, or politicians, who decide not to talk to us.

But, with growth and sustainable tourism being at the top of many locals' list of concerns, we think it's important to share two recent situations where Air New Zealand and Tourism Holdings refused to talk to Crux. Air NZ could not be bothered and THL said they were too busy.

In the interests of fairness and balance, this editorial will give some important context to both situations - but the end result seems to be an indifference to the Southern Lakes, bordering on arrogance, from both companies. That's not good news for those of us who are worried about the future shape of our communities.

You may not instantly recognise Tourism Holdings or THL, but they own and rent out those camper vans that we talk about so much. Their brands include Maui, Britz and Mighty. They have got around 4500 camper vans in NZ and it's big business. $426 million of business to be precise, $62 million being profit, although THL operates camper vans in other countries as well.

THL is based in Auckland and is the world's largest camper van rental company. It is worth $2.58 billion, about the same as Air NZ, which is worth $2.81 billion. THL's Queenstown camper van base on Lucas Place - but their head office is in Auckland.

So the Southern Lakes area is really, really important to THL. Any locals will agree that THL camper vans are a key part of the landscape. They are not always welcome, not always well driven and sometimes linked to really bad behaviour involving discarded toilet paper and generally selfish treatment of our district.

Crux called THL during the recent airport expansion debate, which included our survey that showed 84 percent of residents are opposed to the airport getting bigger. If Queenstown airport does not grow, that's going to have a deep impact on THL's future growth. THL's camper van customers usually fly in to town, so there's a direct relationship between Queenstown airport's capacity and THL's future finances. A receptionist answered the phone at THL on June 22. I asked to be put through to their media and communications team. "We don't have one," was the answer. "But I can take a note of your question and pass it on," I was told, helpfully. These days it's normal for journalists to email questions in advance of an interview, so I asked for the best email address. I was given the email address for Ollie Farnsworth, General Manager, Marketing and Revenue. It's very unusual, for obvious reasons, for a marketing person to comment to media about company strategy. The job of Ollie Farnsworth is to make money, not run the company.

Our email was sent to Mr Farnsworth the same day. Our questions were around THL's views on freedom camping, asking what contributions the company made to the Queenstown community, and its thoughts on the cost of meeting Queenstown's tourism infrastructure. We also wanted to know about the effect of airport growth on future revenue. No reply was received. Crux sent a follow up email on Thursday, August 9th.

I asked if there was someone else who did have time, or was everyone at THL too busy to speak with Queenstown media?

So that was the end of that. It turns out that THL has a whole website dedicated to sustainable tourism and is even producing a special report on Queenstown. But we can't tell you any more about that, due to the absence of a media and comms team at THL and everyone being too busy to talk to us.

Crux sent an email to the Air New Zealand media team on August 10th. The email requested a phone interview with Air NZ CEO Christopher Luxon on the same sort of subjects as we asked THL. What does Air NZ contribute to the cost of tourism infrastructure in Queenstown, what happens to Air NZ's revenue forecasts if the airport does not continue to grow, and so on. It was a polite and detailed email.

I called Air NZ's media team to make sure they had got the email. Yes they had, was the answer. Who was handling it? No names, but senior media people had been assigned to handle the email, I was told. Can I have an email confirming receipt of the request? OK.

It might be unfair to say that the media person I spoke to at Air NZ seemed highly bemused at a community news interview request from Queenstown. She said that most of the team were out of the office. It might have been an Auckland long lunch, or an important conference on airline media relations. Maybe they were meeting with THL re: how to run a media team - there's no way of knowing. Air NZ did not reply to the Crux email at all, apart from the "thanks, we've got your email".

The man on the spot - Colin Keel

Now, imagine this: you are paid big bucks to manage Queenstown airport. According to the airport's annual report, the current airport CEO, Colin Keel, is getting around $500,000 a year. So is he being paid that money to keep the airport exactly as it is now, or make it bigger? Do THL and Air NZ want New Zealand's premium tourist destination to freeze airport growth, or make the airport bigger - a lot bigger?

Because that's really what this is all about. It's not the airport that needs to increase in size, but all the companies that depend on airport growth for their own future revenues. Airlines, rental car companies, camper van companies and hotels - most exclusively owned and operated outside of Queenstown. Imagine Colin Keel explaining to these high-rolling airport users that "the residents don't want any more growth". Can you imagine the stony silence on the other end of the phone and the glee with which the Auckland executive head hunters would start the search for a new Queenstown airport CEO? And the shareholders - what of their view? Our local council owns 75 percent of the airport and Auckland airport owns 25 percent. Does the council want to field those difficult phone calls from the tourism giants? And guess what, Auckland International Airport is listed on the NZ stock exchange with a value of $8 billion, more than Air New Zealand and THL combined. You can start to see why Auckland airport's stake in Queenstown airport is such a sensitive detail.

All of this hopefully highlights why the issue of airport expansion is not really about noise limits. It's about the future of Queenstown and Wanaka. Sustainable, high quality Kiwi towns in the mountains. Or the Disneyland of the Southern Hemisphere - but without all that clean, tidy Disney stuff.

It's literally fight or flights.

Will the ratepayers of Queenstown and Wanaka literally get thrown under the bus? Will we get bought off with a bed tax that the tourists, and not the tourism companies, fund? Will these out-of-town tourism giants and airlines suddenly slash their revenue forecasts and say "Queenstown is off the menu"?

Don't hold your breath. We are at a forked road, right now, and the outcome will dictate the future of our communities.