A historic stone hut used as a backcountry base for trampers near Wānaka is getting a major facelift - but its remote location is making the project a tricky one for all involved. 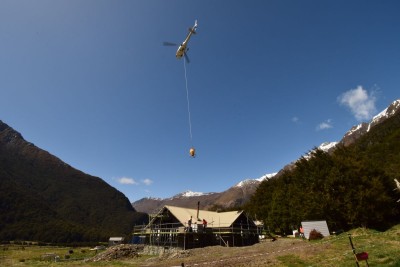 Aspiring Helicopters bringing in the concrete to pour down a chute to the foundations. Image: NZ Alpine Club

A couple of hours in from the Raspberry Creek car park in the Matukituki Valley sits the Aspiring Hut, owned by the New Zealand Alpine Club and managed by the Department of Conservation.

Opened in 1949, the much-loved hut needs some work to earthquake strengthen it, and its owners are taking the opportunity to sort some other upgrades out at the same time.

The hut's increasingly popular with family groups, including young children, so the hut's having a redesign to better accommodate these users in smaller bunk rooms.

In its latest update, the alpine club says the refurbishment is "progressing well".

There have been a few "unanticipated" bumps along the construction road that have "required some quick thinking on the part of the designers and builders" and mean the project is "running a little behind schedule".

However, the club's not concerned by this as it's to be expected in such a project, it says.

Plus, the location obviously makes it a trickier construction project. 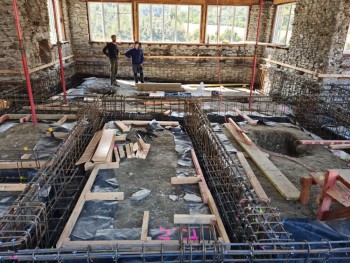 "Pouring concrete is tricky at the best of times, but is made more difficult when trucks have to travel to a remote location, load the concrete into a hopper under a helicopter and then fly it into a remote valley to the awaiting builders…in the rain.

"But the team managed this with no incidents other than a concrete covered radio. With over 100 helicopter loads and a turnaround of seven minutes this was an amazing piece of flying and ground support by Aspiring Helicopters and the builders.

"That they could achieve it without incident is testament to the planning and organisation of Karl Boomsma and his team of builders, and the excellent contractors who are working with them."

Since the foundation has been completed, the roof of the hut has been removed leaving just the stone walls standing.

Some of the hut rebuild will include the use of Cross Laminated Timber panels (CLT) - pre-made walls - that are being manufactured in Australia.

"It was a sad looking sight, but as the CLT panels have begun to arrive on site the shape of the refurbished hut is quickly rising from ground. The floor is nearly complete and walls are being erected, giving a much better sense of the scale and feel of the revamped hut.

"The weather has been terrible at Aspiring for much of the last week, and while the tractor has managed to bring most of the panels up on the trailer through the river, for the first time in the project we were stopped by high flows. 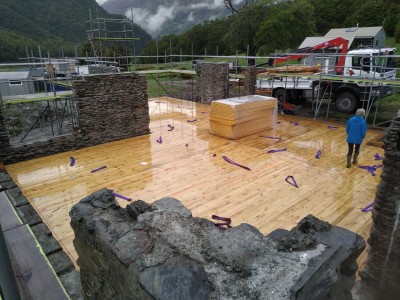 The floor is now down at Aspiring Hut. Image: NZ Alpine Club

"However, the builders wanted to continue on so a few of the floor panels were flown up to keep the job moving. Of course, with no roof, the building team are now working in some tricky conditions and have limited options for their breaks and after work, with the warden’s quarters, a mess tent and tiny sleeping bivvies the only shelter available at site."

The project remains "reasonably on budget", although helicopter costs have been more than anticipated.

"We are still working to a budget of $1.1 million and have fundraised nearly $1 million of this. However, we are still looking for the last $100,000 to complete the project."

Main image (Tom/Creative Commons): The Aspiring Hut in the Matukituki Valley, near Wānaka.