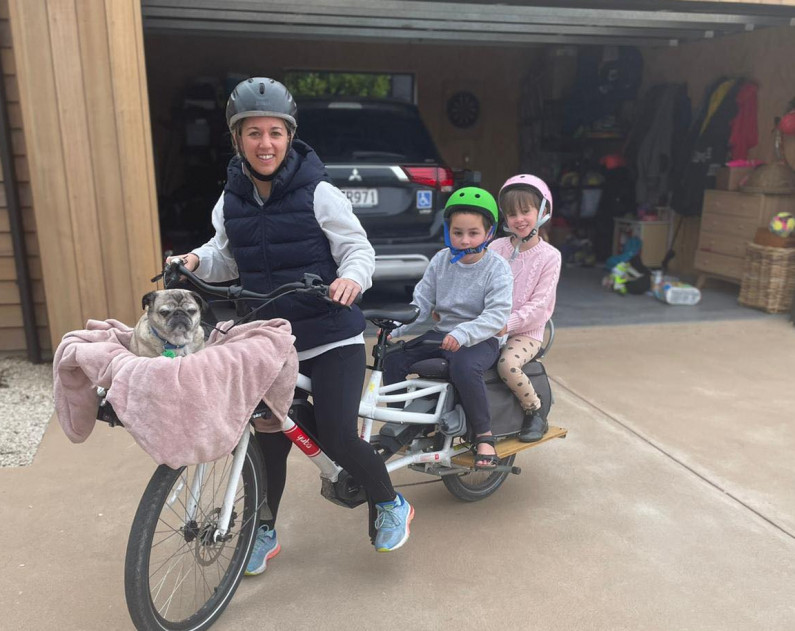 Test the Network: Our commuters survive the week - no cars!

(Main Image: Kids, the dog and maybe even the kitchen sink can be transported by Frank’s Eatery owner Victoria Lethbridge on the e-cargo bike they’ve used during the Test the Network challenge.)

Reader commentary. Amanda Robinson is Chair of the Lightfoot Initiative, a local group advocating for active transport and alternate travel solutions. Here's her report on this week's Test the Network project, where seven locals put bikes, the bus and carpooling to the test, leaving their cars at home.

"We checked in with Test the Network challenger Jen Mitchell at 9.21pm on Friday night to hear how her week had been. To our surprise, Jen was on her fifth bus trip of the day, with her son, Savin, on his fourth. They were returning home from dinner out with friends in town after a day of navigating their way around the basin by carpool and bus. Here's Jen's video.

The commitment and effort that the Test the Network challengers had put in during a typical working week was enormous. They’d collectively covered the whole Whakatipu basin, traveling from as far afield as Arrowtown and Jack’s Point – many transporting kids and gear.

Some used innovative solutions to tackle every-day problems. Our Frankton based Challenger Angela Spackman repurposed her dog trailer to ferry weighty cricket gear around and to pick up the weekly shop. Of course, easier said than done if one lives further afield or up a big hill. We know that it’s these logistical issues that trip people up when they start thinking about changing how they travel.

It’s been clear that active travel has taken time and effort for the Challengers. Our Family Challengers, the Lethbridges had the dreaded call while at work: “your child has been sick, please come and pick him up”. Many view unforeseen emergencies  as a major barrier when considering reducing car use, and these issues definitely present challenges that require creative community-centred solutions.

One such solution to support emergency travel, is a  Guaranteed Ride Home scheme. These schemes can give people the confidence to trial active modes by providing quick and independent transport if required. This is an easy system to embed in a workplace, and is an initiative that Lightfoot has researched and will roll out to Queenstown workplaces in 2022. It provides a cheap solution (less than 2% of employees need to use them) and provides peace of mind and helps support mode shift. 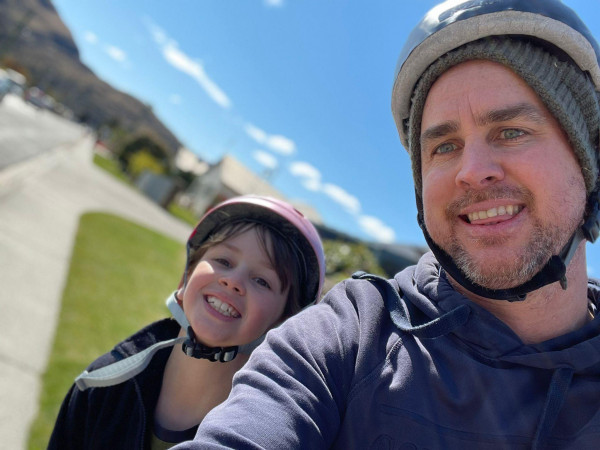 Aaron Lethbridge and son Quinn have enjoyed stepping out of the car and onto a bike that can carry them both.

A recurring theme that’s emerged from our challengers is  time. Will, who works near Five Mile and lives in Shotover Country has observed the peak hour traffic from his bike and felt pretty happy about moving faster than the cars. Describing the freedom he feels on a bike as “liberating”, and the traffic as “diabolical”, we get a sense that Will might look at making  a permanent shift onto an e-bike for those short trips. Whilst an e-bike trip can sometimes take longer than a car, at least the time is predictable and one isn’t at the mercy of traffic jams.

When Lightfoot set out to run this challenge, we had some ideas about how the week might play out for the participants. We predicted that everyone would start strong with 100% commitment and good intentions but that things might… ‘drop off slightly’ as the realities of daily bike, bus, walk became more challenging. In fact, the Challengers have taken it much further than we thought was possible. We know it’s made some of them more tired (but sleeping better), richer (not paying for petrol), fitter (passive exercise through daily commuting)) and maybe changed their view on what’s possible without the car. We’d love to know… has it changed yours?

Tune in for our final instalment on Wednesday night."