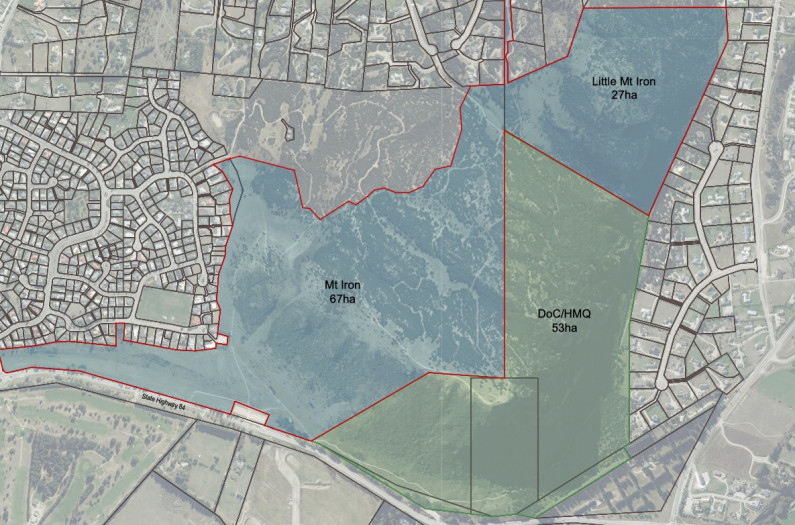 Queenstown Lakes District Council (QLDC) has reached an agreement with the owners of Mt Iron and Little Mt Iron in Wānaka to purchase nearly 100ha of land which will be held as public reserve in perpetuity on behalf of the local community.

Councillors voted unanimously at today’s Full Council meeting to support a resolution to purchase the land and act as kaitiaki. The purchase is now subject to final due diligence.

QLDC and Allenby Farms Ltd have been working constructively for around 18 months to reach the agreement that will see 67ha on the north, west and southern flanks of Mount Iron and land running along State Highway 84, plus an additional 27ha centred on Little Mount Iron transferred to Council ownership and held as reserve for community use.

Queenstown Lakes District Councillor Quentin Smith said he was incredibly excited that such a significant and much-loved part of Wānaka was coming into public ownership.

“Opportunities like this come along maybe once in a generation. With increasing development pressure around the district, reserves and open spaces have never been so important for community wellbeing,” he said.

“Mount Iron is literally the centrepiece of Wānaka being a dramatic example of glacial geomorphology with enormous recreational value. Up to 180,000 people a year currently use the existing tracks and Council’s purchase will open the door not only to a whole range of potential activities like new walking and biking trails but also improved opportunities for active transport routes near the state highway, biodiversity improvements and the ongoing protection of this land from development.”

The Cleugh family will retain 22ha on the north side of Mount Iron. Lynden Cleugh said his family had long seen themselves as guardians of a very special property.

“We’ve resisted many approaches to develop and commercialise Mt Iron since Laurie and Brian Cleugh bought it in the early 1960s as a farming operation. Since then we’ve spent countless hours keeping the property free of weeds and wilding pines while maintaining a long-term vision that Mt Iron should at some point be managed on behalf of the community. That way everyone can enjoy this special place in the middle of our growing town,” said Mr Cleugh.

“We purchased Little Mt Iron in 2017 with the sole purpose of it becoming a public reserve along with the main property. It’s a special gem just waiting to be discovered. We’re very excited to finally announce this legacy acquisition for the community and thank QLDC staff for their shared vision.”

Councillor Smith thanked the Cleugh family for progressing the proposal over several months.

“On behalf of my fellow Councillors and Wānaka Community Board members I would like to extend huge gratitude to Lynden and the Cleugh family, and also to the Council staff who have helped turn an idea into reality. I am beyond ecstatic to be able to now share this news with the Upper Clutha community,” said Councillor Smith.

Separate to the agreement outlined above, Council has commenced discussions with the Department of Conservation Te Papa Atawhai (DOC) with the prospect that QLDC take ownership of the remaining section of Mt Iron currently owned by DOC.