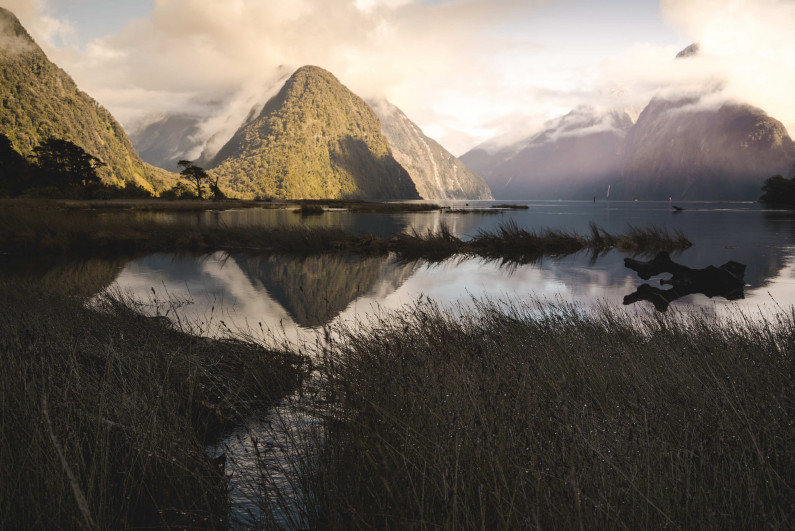 "A more even distribution of visitors going into Milford Sound Piopiotahi is one of the key recommendations being made by the Milford Opportunities Project’s masterplan, which was launched in Te Anau today.

Project governance group chair Dr Keith Turner said the project began in 2017, after concerns about the rapidly growing visitor numbers in Milford Sound Piopiotahi were raised by Southland District Council and the Department of Conservation. Numbers peaked at 870,000 visitors in 2019, up from 430,000 in 2013.

“While Covid set back the numbers, we expect them to return because it is a rare opportunity to visit true wilderness,” Dr Turner said.

“We received clear and strong feedback during the extensive engagement conducted throughout stages one and two, that the numbers, intensified by mass arrivals of buses from Queenstown around lunchtime, were causing parking congestion in many places, problems on the Milford Road and at the sound itself,” Dr Turner said.

The recommendation to more evenly distribute numbers through a park and ride and permit system, with International tourists paying a fee for their permit, will provide funding to many other elements within the masterplan.

The income from permits will improve infrastructure for the visitor experience, enable many conservation improvements and special protection projects within Fiordland National Park, enable mana whenua culture and history to be fully represented and also fund local community aspirations.  New Zealanders will not pay for an access permit. But private vehicle parking permits at Milford Sound will be limited.

A key aspect of this will be the focus on environmental sustainability, with the buses to be electric or hydrogen and a longer-term goal to make Milford Sound Piopiotahi entirely a carbon zero tourist destination.

“We received clear feedback that most visitors were as entranced by the journey through the Eglinton and Hollyford valleys as they were with the Milford Sound destination, but did not have enough time to enjoy the many stop offs available.  We want to create more time for the journey into Milford Sound Piopiotahi. There are many places around Te Anau and along the Milford Road which are stunning and well worth a visit.” Dr Turner said.

“We believe Te Anau should be the start of that journey and we know that is a fundamental change for the market, but Milford Sound Piopiotahi should not be just a rush-in, rush-out place. We want to restore “the essence of the place”. Visitors should feel the wairua (spirit) of the place, the tranquillity, the awesome surroundings and the wilderness,” he said.

Other recommendations include a combined visitor centre and park and ride  base at Te Anau and another in Milford Sound Piopiotahi, along with new hotel and staff accommodation; creating more visitor opportunities near Te Anau ( including both cycle ways and walking  paths), in conjunction with the Fiordland Community Board; improved walking and some cycle tracks  on the corridor;  better walking and viewing opportunities at the sound,  as well as improving the  layout on the very limited flat area of Milford.

“There is rich Maori history both in the corridor and at Piopiotahi that would add to the visitor experience. The history and the legends need to be told correctly and the themes carried throughout the journey.”

Mana whenua have worked in partnership in the project team and also as an advisory group.

Another key recommendation is to have one body managing Milford Sound Piopiotahi. The area is covered by many overlapping legislative acts which makes improvements very difficult to achieve.

At the moment there are both local government and central government, along with commercial interests, looking after what happens in the sound, and a lot of feedback was received about how long and confusing processes were.

The masterplan also recommends that the airstrip at Milford Sound Piopiotahi be closed and cruise ships not be allowed into the inner sound.

“We know this will be controversial and that we will be affecting people’s livelihoods. But the airstrip is in a poor state of repair, is already beginning to flood at extreme high tides, is very exposed to alpine fault tsunami risk and would be very expensive to rebuild to a modern and sustainable standard. It only carried about 3% of visitors in 2019.  And the visual impact and risk of cruise ships are in conflict with the majority of land-based visitors, and they have other Fiordland options equally spectacular to visit.”

However, Dr Turner said it is important to note the masterplan is making recommendations to Government and detailed business plans on how the recommendations will become reality need to be created, with ongoing engagement with stakeholders an essential part of that.

“We were asked to come up with something innovative, something challenging, something that will change the way tourism interacts with environment and conservation. I feel we have done that and now the hard work of implementation and decision-making on how to implement it begins,” he said.

The Milford Opportunities began at the end of 2017 with a Government appointed governance group made up of representatives from central and local government, mana whenua and business, along with an independent chair. The first stage of setting up its vision, values and pillars, along with a gap analysis of what research was available, was completed in September 2018.

After further government funding was received, the project moved into stage two at the end of 2019, when consultants Stantec and Boffa Miskell were hired to create the masterplan and all the research carried out to back the plan up. That was completed earlier this year, with the masterplan going to the Ministers and Cabinet, before being released to the public today.

During both stages, there was engagement with the community and key stakeholders, reference groups were set up and two nationwide survey campaigns were run in 2020."