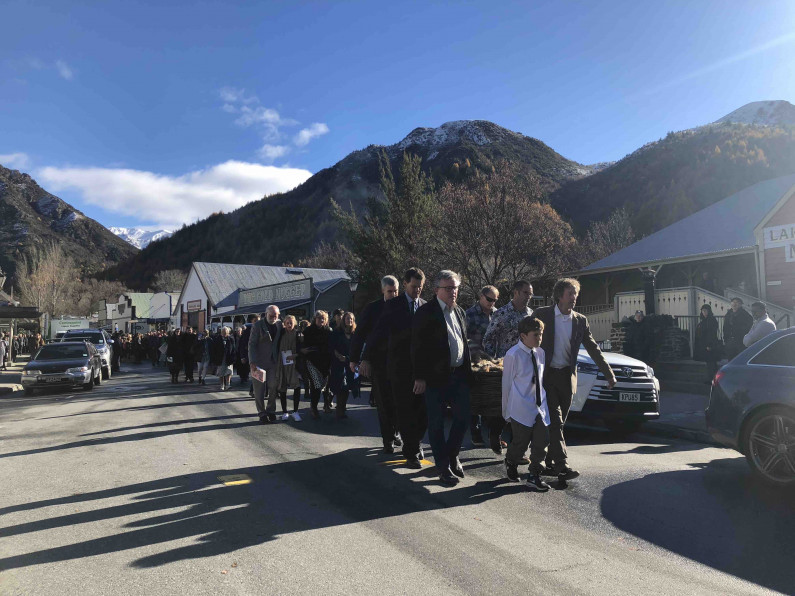 The community of Arrowtown united today to pay tribute to Keith Crawford who has died of a brain tumour aged 49.

Keith and his wife Jeannie took over the Fork and Tap pub just seven years ago and turned it into a solid, warm social foundation that helped bind the community together through thick and thin. Hundreds of mourners outside the Fork and Tap pub following today's funeral service for Keith Crawford.

Keith had been coping with cancer for over 13 years but always had time to help other people.

“He never asked ‘Why me?’,” his wife Jeannie explained. “His passion was health and fitness. His passion was the mountains. He saw his cancer as a gift that helped him see life more clearly.” Keith Crawford with wife Jeannie and children Zoe and Jed. "He radiated love."

Keith was born in Kawakawa in Northland and worked in the mountains of Canada and Europe as a ski guide before settling in Wanaka where he trained as a physiotherapist.  Jeannie and Keith were coming up to their 10th wedding anniversary this year. Their two children are Zoe (13) and Jed (9).

After moving to Arrowtown from Wanaka around nine years ago, Keith worked in Hamiltons wine shop where he started to learn about wine and quickly became friends with his customers. He became close mates with one customer, Scott Murray, when they discovered a mutual interest in hunting. Keith had a side of pork hanging in the beer chiller.

Keith did not talk about his cancer much, but when Scott eventually shared the fact that he was also in the middle of a cancer scare, Keith became one his prime supporters. “Keith helped me both mentally and physically,” says Scott. “I attribute a lot of my own success in getting my health back to Keith’s kindness.  We swapped alternating stories of failed and clear cancer tests. He radiated love.”

Scott was experienced in the hospitality industry and was able to help Keith and Jeannie in their early days at the Fork and Tap, where they struggled to cope with what was a very steep learning curve. Little of that learning process was visible to their customers and staff who thought Keith was a natural publican. Many of the staff from those challenging first days are still at the Fork and Tap. Keith Crawford "had a passion for the mountains and for life."

Jeannie plans to carry on at the Fork and Tap. She says today’s celebration of Keith’s life, at the pub they have both made special, is what he wanted and how he’d like to be remembered.

The procession, involving hundreds of mourners, from the formal memorial service to the pub was streamed live on social media, to the hundreds of friends Keith had made throughout New Zealand and the rest of the world.