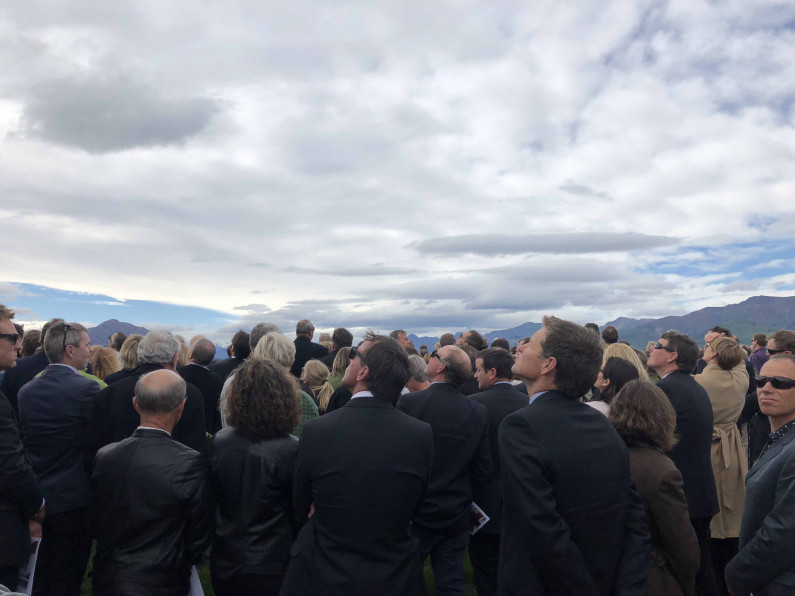 Up to 2,000 Mourners bid an emotional farewell to Nick Wallis today as his coffin was flown from the funeral at Wanaka Airport by helicopter.

Even though extra facilities had been provided for a huge turnout, the number of people attending spilled outside, with cars parked for up to two kilometres along the main road. Even with a large marquee extension to the Alpine Helicopters hangar, mourners still spilled outside.

Tributes to Nick were paid by his family, including his widow Carrie who told mourners that "Nick had grown into a wonderful man and leader. We were a great team, especially when things got tough."

An investigation by the Transport Accident Investigation Commission into the cause of the accident is ongoing. The Hughes 500 aircraft crashed just 2 kilometres from Wanaka airport on October 18th, killing Nick and two DOC staff - Paul Hondelink and Scott Theobald. A lone helicopter waits to fly Nick Wallis' coffin away from the funeral.

Toby Wallis addressed his brother at the start of his tribute with - "Nick - this is so bloody unfair."

Nick's brother Matthew was killed only three months ago in a separate helicopter accident.